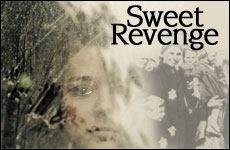 Visiting a concentration camp, faced with overwhelming evil, I was filled with a bolt of anger. What is our revenge?

Some moments are so profound that they stand out like bolts of lightning in the darkness of life, reminding us where we are headed and why:

My eyelids had practically disappeared the moment the plane landed. There was no pulling me away from this experience. Some girls were nervous, uneasy about this kind of trip. The thought of visiting death camps and crematoria in the dead of the Polish winter was not all that appealing to some of my peers. Unfortunately for them, the 10-day trip was mandatory for all students attending our Jerusalem seminary that year.

I, for one, could not relate to their tepidness. Some time in my very early childhood, while visiting my Bubby, a survivor of Auschwitz and the sole survivor of her Hungarian family, I began flipping through old photo albums and discovered some pictures taken at the Yad Vashem museum in Israel during a trip my mother and Bubby had taken together in 1980. One moment I was looking at my youthful mother in the hot Israeli sun, and the next I was staring at black and white pictures of emaciated children and a massive pile of naked skeletal corpses.

From that day on, whenever we visited my Bubby, I’d wait until everyone was in the kitchen, and then I’d climb onto the couch, pull down that album, and find those pictures. I’d stare in horror until a stray sound startled me, and then I’d slam it shut, put it back and run into the kitchen where smiling, living people sat, happily. Apparently, my Bubby had seen those horrible things with her own eyes, and yet still managed to smile at us, her grandchildren. My gentle, sweet, beloved Bubby. It was hard to imagine.

From then on, the Holocaust became a closet obsession of mine. So I was looking forward to this trip to Poland. To see with my own eyes the places where so many relatives, including my great-grandparents, had been killed so brutally, was deeply meaningful to me. I knew it would be an emotional trip and hopefully a spiritually satisfying one, but I wasn’t anticipating the overwhelming feelings that were about to descend upon me.

I walked through the camps and saw how people slaved away to construct barbed wire fences, rows of barracks and watch towers, all mapped out with the absolute intent of committing a highly effective and efficient genocide. The evil was overwhelming, turning the fragile human mind on its head and flipping it in circles of disbelief.

Holocaust education can too easily become dry, laced with unfathomable numbers and facts. But to revisit the history in excruciating detail, relentlessly, for so many days in a row, was to gain a tiny glimpse of the actual scope of horrors experienced by the victims. This was not a text book or a film, but a slow-moving tutorial through human evil, replete with cliff notes, fact lists, and props.

One day, after visiting the Majdanek death camp, we loaded the bus and sat down, and my mind went blank. I was so shocked by the massive piles of shoes and the slanted beds in the barracks, and the stories of suffering and deterioration, I could not think straight.

Suddenly, I was filled with a bolt of anger. Then a clear and powerful question emerged like a key rising out of mounds of sand.

What is our revenge?

The question had never really entered my mind before. I had quietly mourned the dead, cried at the horror of it all, wondered how people could be so evil, and how human beings could create a better, kinder world. But revenge? I’d never felt the need for it before. But here and now, faced with the scope and sheer insanity of it all, my logical mind thrust itself through the layers of emotion and demanded an answer.

Nothing could bring the murdered back to life or erase the heinous cruelty of so many. But what could we do as a people, and what could I do as an individual to avenge the deaths of all these innocent souls?

And then, from somewhere, a thought entered my mind, and I was comforted.

The tears came now, heavy and hot, smoking up the frosty window.

We may be eternally persecuted, but we have our revenge, and that is to go on living proudly.

The only revenge, and the best revenge, was to be Jewish. Not just to move through life as a Jew, but to really be Jewish, to be Jewish with a passion. Yes, I was sure that was the answer. The Nazis constructed a deliberate and intentional plan to annihilate the Jews. Therefore, I would be a deliberate and intentional Jew to make sure they never succeeded. Every survivor that married and raised Jewish children was an exclamation point screaming Sweet Revenge! And every Jew that wears the banner proudly and teaches her children the beauty of Torah and of living up to the highest moral standards of righteousness and compassion, ensures that the world will never fall completely to wicked empires bent on world domination. Empires like Nazi Germany or the Soviet Union, or the Greeks, or the Romans or the Babylonians, whose destruction of the temple we mourn on Tisha B’Av. The actors change, but the story remains eerily familiar. We may be eternally persecuted, but we have our revenge, and that is to go on living proudly.

I took a deep breath and wiped my tears away, feeling deeply empowered and peaceful. I looked around at the busload of 18-year-old girls, many eager to get on with their year of religious studies in Israel, to eventually meet “the right one” and build a Jewish family, and I realized, that indeed, revenge can be sweet.

Transforming the Pain of Tisha B’Av to Active Responsibility
Why Are The Prayers Of Yom Kipur So Repetetive?
Ha'azinu 5783: A Time for Unity!
Twisted Thinking
Comments