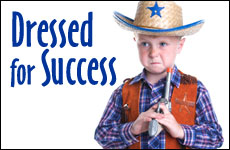 Purim is here, and it’s about time you gave some serious thought to the subject of costumes.

Purim is here, and it’s about time you gave some serious thought to the subject of costumes.

But not too serious a thought. I have a friend who takes pictures of his kids in costume sometime before Purim, develops the pictures, makes several copies, and attaches them to his mishloach manot, which is also themed to match the kids’ costumes. Whereas I’m not quite organized enough to remember to take pictures of the kids in their costumes on Purim. Sometimes I have to do it after Purim; “Alright everyone, back in your costumes! We forgot to take a picture!”

“But I’m missing half my outfit!”

“Stand behind the others; you’ll be okay.”

But what kind of costumes do you need? I guess it depends on your kids. Little boys generally want to be something that ends in the letters M-A-N, such as a policeman, fireman, mailman, Superman, Haman, etc. In fact, boys will decide what they want to be, and if it doesn’t have an M-A-N, they will add one. One year when I was a kid, I told my mother I wanted to be a magic man. Also, a lot of kids say they want to be a workerman, like everyone else doesn’t work. The only guys who work are the ones you see at the side of the road, taking 4 months to patch up a tiny piece of highway, and every time you drive by, they’re taking a break. Those guys are workermen.

Little boys generally want to be something that ends in the letters M-A-N.

Another thing little boys want is to be able to carry a gun. For most of us, our daily lives require very little use of a gun, except maybe to open the front door when we forget our keys. So if the kid can be, say, an armyman (for some reason the word “soldier” escapes him,) that’s a double bonus.

Little girls, meanwhile, want to be Queen Esther. Their class has a Purim party a few days before Purim, and there are like 24 Queen Esthers. It looks like a mini Queen Esther convention.

But generally, what really determines what your kid is going to be is whether you’re buying the costumes or making them yourself. Because there are certain costumes that are just easier to put together. It’s just a question of convincing your kids that this is what they really want to be. We’d suggest adding a M-A-N to its name in your argument:

Bakers are a popular option with mothers who put their own costumes together, because they’re pretty easy to do. You just make a hat out of cardboard, put on a huge apron, and maybe draw a curly moustache on the kid’s face, because apparently, most bakers have a huge curly moustache, so they have something to scratch their noses when they have both hands in the dough.

Another popular option with mothers is to dress their kids up as clowns, even though research has shown that over 100% of children don’t like clowns. Clowns act weird; they have big, floppy feet; they squirt water at you; their hair looks like they slept in it; and they try to fit too many of their kind in a car. They’re like teenagers, but smiling. Is that what you want your kid to be? Never mind trying to put a full face worth of makeup on an excited child.

Another costume method mothers like is to get a cardboard box out of the recycling, and do something with that. If your kid is willing to wear a cardboard box, he can be cereal, a computer, a sukkah, a gift, a pair of shoes, a robot, a jack in the box, a garbage can, a coffin, a stove, a running refrigerator, and a cardboard box from the recycling.

Whereas if you’re buying the costumes, it really depends on what sort of costumes were on sale after Halloween. Because there’s no reason to pay full price for an outfit that the kids are going to wear for one day. Not even one day. They’ll wear it for a couple of hours in the morning, and by the time you’re back from delivering mishloach manot, the mask will gone forever. The mask is the first thing to come off, because mask-designers have no idea how far apart a kid’s eyes are, so after a few times of blindly stumbling out of the car and tripping over the sidewalk, the kid just decides, “Forget it,” and the mask disappears into somebody’s rebbi’s house. And if there’s no mask, the beard is the first thing to come off. (Fake beards are incredibly itchy. That’s why so few rabbis have fake beards.) Then a short while later, the gloves will come off, then the jacket, and by the time you get to the meal, you aren’t even able to tell what the kid is supposed to be.

But when it comes to adults, there are basically two schools of thought. There is the school of men whose costume consists of a tie with a palm tree on it, or else they wear their wife’s old wig. “You spent four figures on this. Someone should get some more use out of it.”

Do you have any idea how hard it is to drive in an inflatable costume?

And then there are the men who ascribe to the “There’s no rule against grown men dressing up” theory. Because there isn’t. But they should bear in mind that while it’s cute to see a kid dressed up, I think the media doesn’t publicize Purim as much as they could. This is something one of my friends, who lives in Manhattan, realized on Purim as he, dressed as a hobo, got onto the subway with little shopping cart piled with some nicely wrapped food baskets featuring wine. No one wanted to sit next to him.

And do you have any idea how hard it is to drive in an inflatable costume?

The interesting thing, though, is that the boys are all dying to be men, and the men are trying really hard to be boys. Purim sure is backwards.

Don’t Ask Your Children This

The Joys of Yiddish
Don’t Believe in Other Gods Versus God is One
Seeing Without Eyes
Why Shouldn’t We Eat Whatever We Want?
Comments
MOST POPULAR IN Jewlarious
Our privacy policy
Aish.com Is Looking for Great Writers