42. Tisha B'Av and the Three Weeks 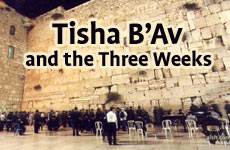 Mourning the destruction of the Holy Temple.

Historically, the "Three Weeks" between the 17th of Tammuz and Tisha B'Av are days of misfortune for the Jewish people. During this time, both the First and Second Temples were destroyed, amongst other tragedies. 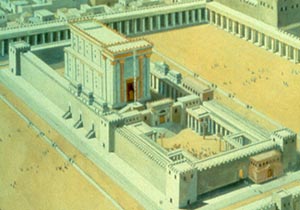 On Shabbat during the Three Weeks, the Haftorahs are taken from chapters in Isaiah and Jeremiah dealing with the Temple's destruction and the exile of the Jewish people.

During this time, we minimize joy and celebration. And since the attribute of Divine judgment is acutely felt, we avoid potentially dangerous or risky endeavors. Also, various aspects of mourning are observed by the entire nation. Read on for details...

The three-week period begins with the Seventeenth of Tammuz, a day on which five catastrophes occurred in Jewish history:

The Seventeenth of Tammuz is a fast day, where no eating or drinking is permitted from dawn until dusk. (Bathing, anointing, and wearing leather shoes are all permitted.) The purpose of the fast is to awaken our sense of loss over the destroyed Temple, and the subsequent Jewish journey into exile.

During the weeks leading up to Tisha B'Av (i.e. beginning from the Seventeenth of Tammuz), we gradually increase the intensity of our mourning. During this time there are a number of laws and customs:

The period commencing with Rosh Chodesh Av is called the "Nine Days." During this time, a stricter level of mourning is observed, in accordance with the Talmudic dictum: "When the month of Av begins, we reduce our joy."8 Restrictions include:

Tisha B'Av ("the ninth day of the Hebrew month of Av") is the Jewish national day of mourning, which marks a series of calamities:

The Temple's destruction, and the subsequent dispersion of the Jews from Israel, left a scar on the Jewish people that has not healed. Indeed, other grave misfortunes throughout Jewish history occurred on Tisha B'Av, including:

On the afternoon prior to Tisha B'Av, it is customary to eat the Seudah Hamaf'seket – a meal consisting only of bread, water and hard-boiled egg. The food is dipped in ashes, symbolic of mourning.31 The meal should preferably be eaten alone, while seated on the ground in mourner's fashion.32

Tisha B'Av is the Jewish national day of mourning, marking the destruction of the first and second Temples. In order to instill an appreciation of this great loss, the laws of Tisha B'Av are generally stricter:

On other rabbinic fast days, it is forbidden to eat and drink from dawn until nightfall. On Tisha B'Av, however, the fast begins from sundown, and continues for approx. 25 hours until nightfall the next day.

Tisha B'Av has a number of additional restrictions, starting from sundown:

At the evening service, lights in the synagogue are dimmed, candles are lit, and the curtain is removed from the ark. The cantor leads the prayers in a low, mournful voice. The Book of Lamentations (Eicha), Jeremiah's poetic lament over the destruction of Jerusalem and the First Temple, is read.55 Although it portrays a gloomy picture of the state of the Jewish people, it ends on an uplifting note, reminding us that when we do teshuva, God will return us to our former glory.

At Shacharit, as an expression of mourning, one does not wear tallit or tefillin. Instead these are worn later in the day at Mincha.

At the end of Shacharit, we recite Kinot. This is a book of elegies over the loss of Jerusalem and other Jewish tragedies. The heartbreaking poetry was written by various authors than span a millennium. Kinot should not be read after halachic midday.56

On Tisha B'Av, we recite the special Aneinu prayer that is said on other fasts. Tachanun and Avinu Malkeinu are omitted.

Another insertion, called Nacheim, is added by Ashkenazim to the Amidah of Mincha,57 and by Sefardim to both Shacharit and Mincha. This is a moving plea to the Almighty to console those who mourn the Temple, and to rebuild Jerusalem.

Since the burning of the Temple continued through the 10th of Av, the following restrictions continue until midday of the 10th: haircuts, washing clothes, bathing, eating meat and wine, and listening to music.58

Following Tisha B'Av are the "Seven Weeks of Consolation" ​(Nachamu), where special Haftorahs are read on Shabbat.

The prophets teach us that in the End of Days, all of our fasts will turn into days of celebration, as the Messiah will herald a new era for the Jewish people.59 Through the process of teshuva – self-introspection and a commitment to improve – we have the power to transform tragedy into joy. 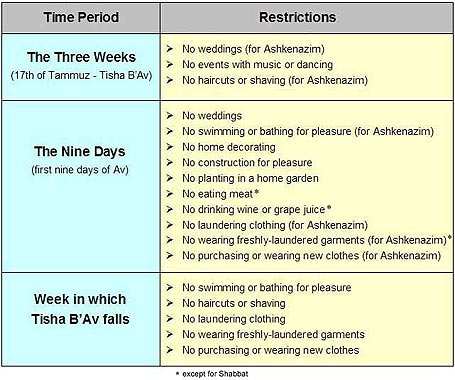 If some of these guidelines seem unduly strict, we may need to more properly appreciate of the loss the Holy Temple – where the presence of God was most tangibly felt, where the Jewish people were united, and where Torah ideals spread to the world. In any case, if there are special circumstances, discuss them with a rabbi, as there may be room for leniency. 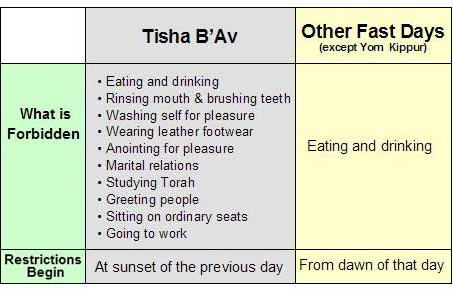 What is Kosher Food?