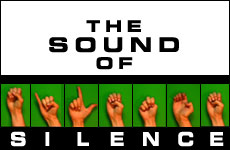 One of the liveliest Shabbat dinners we hosted was with a group of deaf teenagers.

I don't like awkward silence. I like the high paced exchange of ideas that accompanies a lively conversation. Unfortunately, while walking home from synagogue on a recent Friday night with three guests we had invited over for dinner, the four of us didn't utter a word. Awkward silence.

It wasn't that we had nothing to say to each other. My guests were deaf. They were three boys all aged 15, and all attending the world's only Jewish academy for the deaf --Yeshivat Nefesh Dovid.

When my wife opened the door to welcome us back from synagogue, almost magically the lively conversation that I had been hoping for suddenly began. My wife is a sign language interpreter. She can amplify the voice of these young men for those of us who cannot hear them.

With her help, I quickly learned about our guests. Josh is from Los Angeles, has a face that radiates happiness and likes our little dog Oreo because it reminds him of his pet dog back home.

David is from Paris and has command of six languages -- French, Hebrew and English, as well as their three sign language counterparts (yes, each language has its own corresponding sign language, and yes, some deaf people can also use their voices). His father, who is deaf, sought advice from the late Lubavitcher Rebbe, Menachem Mendel Shneerson, when he was a young bachelor on where he could find another deaf Jewish girl, since there were none suitable in his native Israel at the time. The Lubavitcher Rebbe told him to move to France, where he was introduced to David's mother.

Moshe is originally from Argentina and moved to Israel with his family a few years ago. He has command of Spanish, Hebrew and English and their sign language counterparts. He tells us that he likes North America because he found Israel "boring." When I confessed to Moshe that I have heard many adjectives used to describe Israel over the years, but "boring" was not one of them, he told us that there were no suitable schools for Moshe to attend in Israel, so he'd spend much of his time sitting around doing nothing. Boring indeed.

As we sat down for our meal, I was forced to think about things that as a "hearing person" I usually take for granted. For example, when reciting the Kiddush – the prayer over the wine that marks the sanctification of the Sabbath day, I wondered if my guests could even hear me? If not, how do I accommodate them? Since I assumed that they could read lips, I recited the Kiddush slowly, and enunciated clearly, and I saw that the boys were watching the movements of my lips carefully and following along with intense devotion.

With my wife's hands furiously at work, and her voice giving expression to their thoughts, the conversation was as lively as any other Friday night -- if not more.

Although singing special Sabbath songs to celebrate the day is a welcome activity in our household, would such an observance actually be insensitive to our guests who cannot exactly participate? I erred on the side of caution and left the singing for another day.

This did not mean that our Sabbath table was quiet. On the contrary, with my wife's hands furiously at work, and her voice giving expression to their thoughts, the conversation was as lively as any other Friday night -- if not more. I could not help but think how amazing sign language is. Invented only a few hundred years ago, it has given bright, talented, sensitive people the ability to communicate, when society previously never gave them a second thought.

A good example is a boy named Shlomo who also attended Yeshivat Nefesh Dovid, and whom I had met previously. Born in Yemen into a traditional Jewish family, he suddenly lost both his hearing and his entire memory at the age of eight due to a terrible childhood illness. All at once the world around him made very little sense, and the Jewish practices that he had learned from his father over the course of his short life looked foreign and strange.

He watched his father wrapping tefilin, but he could not explain to his son what he was doing, and likewise could not relay the beauty behind the mitzvah. Shlomo would attend synagogue with his family, but he could not hear the cantor nor follow along and could no longer read or vocalize Hebrew. He felt like a stranger in his own home and a foreigner in his own religion.

Because Judaism is a religion that is passed down from parent to child, teacher to student -- much of it through our oral tradition, someone who cannot hear is at a distinct disadvantage.

After a few years of intense frustration, Shlomo could no longer bear to live with his parents in Yemen and moved to New York to live with his sister. He began attending a public high school with deaf facilities but no Jewish education. When Rabbi Chaim Tzvi Kakon, the principal of Yeshivat Nefesh Dovid, heard the story, he rushed down to New York to convince Shlomo to attend his school in Toronto. After some arm twisting and encouragement from his family, Shlomo agreed.

Finally taught in a language that he was able to understand, Shlomo took to his Jewish studies and observance immediately. Finally someone was able to explain the purpose of the mitzvot and the answers were illuminating. He graduated from the high school successfully and moved onto Israel where he is now furthering his Talmudic studies at an advanced level. Recently, Shlomo experienced something else that he had once thought impossible -- he got married.

What impresses me most about all these boys -- Shlomo, Josh, Moshe and David -- is their strength of character. Over the years, I have had the pleasure of working with many teenagers in different organizations, and have found that some of them, even though they seemingly have "everything," are often depressed, despondent, and even somewhat angry. In a word -- they are teenagers. But these deaf boys, who could have chosen to be angry with the hand that God has dealt them, seem so well adjusted. So mature. So happy!

Throughout our Friday night dinner, the boys shared with us the lessons that they have learned in school about the weekly Torah portion. My wife was able to express their genuine wonderment of the depth of the Torah. After Shabbat, we heard from Rabbi Kakon that this was the first time these boys were able to give a dvar Torah -- a thought about the weekly portion -- to hearing people at a Sabbath table. Such is the power of sign language.

As we completed our meal and the boys got up to leave, I wished them a "Good Shabbos." But this time, they didn't have to read my lips – by then I knew how to say it in sign language. Over the course of the evening I learned a few words and was putting my newfound vocabulary to work. After a few moments I realized that I was having a direct conversation with my new friends, but doing it in silence. There was nothing awkward about this silence. This silence was golden.

Visit www.nefeshdovid.com for more information or about Yeshivat Nefesh Dovid and to give your support.

Shining Light in All the Dark Corners

A Reunion with a Stranger

Choosing a Jewish Future
For Every Individual, A Torah Scroll
Allegiance To The Monarch
Meet the Real You: Yom Kippur
Comments
MOST POPULAR IN Israel
Our privacy policy
Aish.com Is Looking for Great Writers