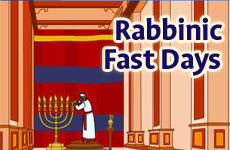 Every world event is a message for the Jewish people and humanity.

The Jewish year is punctuated with a number of communal "fast days." Let us examine the role of a ta'anit (fast day) and what it involves.

Maimonides1 explains the purpose of a fast day as follows:

There are certain days on which all Jews fast as a result of tragedies that occurred on them. This is done in order to arouse the hearts and open the avenues of teshuva. It reminds us of our negative actions and of those of our ancestors which caused the calamities to occur. When we focus on these concepts, we will better ourselves...

In 2004, Southeast Asia was struck with a deadly tsunami, and in 2005 the city of New Orleans was largely destroyed by a flood. People around the world were left grappling: How does God do this to humanity?

A basic idea of Jewish consciousness is that every occurrence in the world is orchestrated by God. Whether a natural disaster, warfare, economic downturn, political crisis, or any other form of catastrophe, it is to be seen as a message for the Jewish people and for humanity. The Almighty loves humanity and wants to see us thrive and be successful. But sometimes, He sends a stern message to remind us to mend our ways.

In ancient times, the prophets designated certain days of national tragedy as a means of introspection. We will explore these days, later in this article.

On the fast days (other than Yom Kippur and Tisha B'Av), it is forbidden to eat and drink from dawn (approx. 75-90 minutes before sunrise) until dusk (approx. 25-50 minutes after sunset, depending on the location).2

God created the universe for our benefit. He wants us to have pleasure. The Talmud says that after we die, we will be asked if we tasted all of the delicious fruits,3 and that someone who vows to abstain from wine (a nazir) is considered as having sinned for not partaking of God's world.4

But sometimes, after a big meal, it's hard to focus on anything other than the sense of fullness in our stomachs. In order to ensure that we utilize the special days of introspection properly, we refrain from eating and drinking on those days. This allows our minds to be freed of material limitations, so that we can more readily focus on the important message of the day, both on a personal and national level. The abstinence from food is a medium to achieve this.5

All healthy Jewish adults are required to abstain from food and drink on fast days. Boys under age 13 and girls under age 12 need not fast.6 Adults who are suffering from any health condition that fasting may exacerbate are also exempt.7 In some cases, even if fasting will cause significant physical suffering, one is exempt from the obligation to fast.8 Pregnant and nursing women are also often not supposed to fast.9 Since these laws are complex, it is important to seek guidance from a rabbi.

For the rest of us, fasting is really not as scary as it sounds. In fact, many dieticians recommend occasional fasting in order to cleanse the gastrointestinal tract. But more importantly, it is an opportunity to focus our attention on life's calamities and what we should be doing about it.

Fast days: When and Why?

The best-known fast day is Yom Kippur. However, since Yom Kippur has a unique set of rules, one should not apply the material in this article to Yom Kippur, but rather refer to Daily Living – Holidays Part 3.

There are five rabbinic fast days during the course of the Jewish year:

Tenth of Tevet – This day marked "the beginning of the end" of the first Temple. Nebuchadnezzar, the wicked King of Babylonia, besieged Jerusalem. The Holy City had no food or water, and the weakened Jewish soldiers were unable to protect the city any longer.10 This siege began on the tenth day of the month of Tevet. To mark the start of the downfall of Jerusalem, the prophets enacted this as a day of fasting and mourning.11

Seventeenth of Tammuz – During the siege of Jerusalem, the Roman soldiers succeeded in breaching the city walls, and the destruction of Jerusalem was only a matter of time.12 Also, some 900 years earlier, this was the day that Moses broke the tablets at Mount Sinai, in response to the sin of the Golden Calf. Because of these and other tragedies, the Seventeenth of Tammuz is recalled annually with fasting and mourning.

Tisha B'Av – Ever since the biblical Sin of the Spies,13 the ninth day of Av has been "designated" for Jewish tragedies. The worst of all calamities was the initial destruction of both the First and Second Temples. Historically, the Jews were expelled from Spain on this inauspicious day, as well as many other ill-fated occurrences.14

NOTE: For the sake of clarity, a separate essay (Daily Living #42) is devoted to the three-week period encompassing the Seventeenth of Tammuz and Tisha B'Av.

Fast of Gedalia – After the destruction of the first Temple, the victorious Babylonians exiled most of the Jews. A small number were allowed to remain in Israel under the leadership of Gedalia ben Ahikam. This righteous Jewish leader was appointed as governor of Judea by the Babylonian rulers, and it seemed as if there was some hope for the Jewish presence in the Holy Land. But then in 423 BCE, the king of a neighboring country persuaded a Judean prince to assassinate Gedalia. The righteous Gedalia was warned that he would be targeted, but he did not believe that another Jew would try to take to his life.

As a result of the assassination, all of the remaining Jews were forced to flee Israel, and the land remained totally barren for the next 52 years. This tragedy occurred on the third day of Tishrei, and is commemorated annually on the day after Rosh Hashana.15

Ta'anit Esther – While the Jews were dispersed throughout the Persian Kingdom, the evil Prime Minister, Haman, issued an edict that on the 13th of Adar, the anti-Semites of the world would be allowed to annihilate all the Jews. King Achashverosh authorized this decree. Through the efforts of Mordechai and Esther, and through miraculous divine intervention, it was subsequently decreed that the Jews would be allowed to fight back against their enemies.

This battle represented a very dangerous time for Jewish people and they fasted and did teshuva so that God should save them. In commemoration, we fast on this day as well, on the 13th day of Adar, the day before Purim.16

The following chart shows when each of the fasts falls out over the next few years:

Some special prayers are said on fast days. In the Amidah, one paragraph is inserted, called Aneinu. This asks God to mercifully overlook our moral failings and to judge us favorably as the result of our fasting. This prayer is said during both the Shacharit and Mincha services.17 (In the silent Amidah, Ashkenazim say it only at Mincha.18) Only a person who is still fasting may recite Aneinu.19 If one forgot to insert it, the Amidah is still valid.20

In some communities, additional entreaties are recited on the mornings of fast days, called Slichot.21 These poetic additions serve to inspire our teshuva, and include the recital of God's 13 Attributes of Mercy. This section was taught to Moses by God Himself after the sin of the Golden Calf. Moses was told that whenever the Jewish people are in crisis, they should recite these attributes, and God will answer them.22 This formula may only be said with a minyan.23