4 Steps to the Perfect Latke 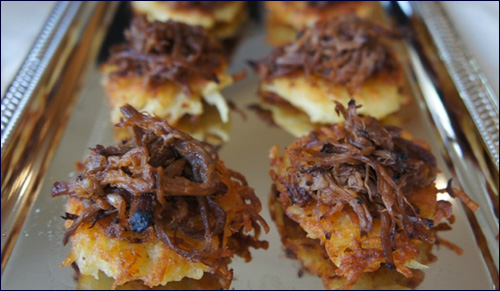 How to make the perfect latke.

In my opinion, latkes are either great or not worth eating. Crispy, slightly salty, no greasy after-taste, and full of potato and onion flavor are what come to mind for a great latke. Over the years I’ve tried many recipes and techniques and honestly the recipes only vary in marginal ways, like using flour or matzo meal as a thickener, schmaltz or oil for the fat, baking powder or none, but generally potatoes, onions, eggs, salt and oil yield a great product if made well.

What to do with used frying oil?

Reuse it. I don’t reuse my frying oil but if yours remains clear and light in color, you can extend its life by straining out the crumbs and storing it after its cooled.

Discard It. Don’t pour used frying oil down the drain. Instead, let it cool, pour it into a biodegradable container, such as a paper milk carton, and throw it out with your regular trash. 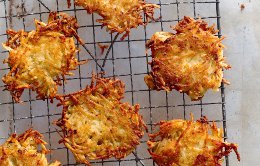 Preheat oven to 325°. Peel potatoes. Using the large holes of a box grater or the grater disk on a food processor, grate potatoes and onions. Transfer to a large kitchen towel. Gather ends of towel; twist over sink and squeeze firmly to wring out as much liquid as possible. Open towel; toss mixture to loosen. Gather towel; wring out once more.

Whisk eggs, breadcrumbs, salt, baking powder, and pepper in a medium bowl to blend. Add potato mixture. Using your fingers, mix until well coated. (Latke mixture should be wet and thick, not soupy.)

Line a large rimmed baking sheet with several layers of paper towels. Set a wire rack inside another large rimmed baking sheet; set aside. Heat 2 tablespoons schmaltz, if using, and 2 tablespoons oil (or 4 tablespoons oil if not using schmaltz; fat should measure about 1/8 inches) in a 12 inches nonstick skillet over medium-high heat. Drop a small amount of latke mixture into pan. If the fat sizzles around the edges, it's ready. (Do not let fat smoke.)

Working in batches and adding more schmaltz and oil to skillet as needed to maintain 1/8 inches fat, drop large spoonfuls of mixture into pan, pressing gently with the back of a spoon or spatula to flatten slightly. (If mixture becomes watery between batches, mix to incorporate; do not drain.)

Cook latkes, occasionally rotating pan for even browning, until golden brown and cooked through, 2 1/2-3 minutes per side. (If small pieces of potato floating in the oil start to burn, carefully strain out.)

Transfer latkes to paper towel-lined baking sheet to drain, then transfer to prepared wire rack. Place sheet with latkes in oven to keep warm and crisp while cooking remaining latkes. 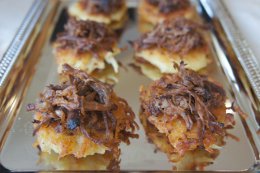 My friend Malkie Hirsch, from Kiss the Kosher Cook, posted this recipe on facebook. She saw it posted on Thenosher.com. All I can say is thank you for sharing this wonderful concept and recipe. Rich and tasty pulled brisket mashed up with crispy fresh latkes. It’s a homerun idea and definitely being served at one or many of my Hanukah meals.

To make the brisket:

Heat the olive oil in a large dutch oven or pot on medium high heat. Sear the brisket on both sides "until the smoke detector goes off." Remove meat and set aside.

Using the remaining oil and "good bits" on the bottom of the pan, sauté carrots and onions, scraping the bottom until the veggies are soft, about 8-10 minutes. Add the tomato paste and stir until thoroughly mixed.

Put the brisket back in the pan, and cover with the bottle of red wine, beer and ginger ale. Place the entire pot with brisket into the oven, and cook for at least 3-4 hours, until meat is completely tender.

When the meat is fork tender, remove the meat and set aside on a large cutting board.

Let the sludge rise to the top of the pot liquid and skim it off. Strain out the carrots and onions and using a food processor, blend them with 1-2 cups of the cooking liquid, then return the blended mixture to the rest of the liquid and simmer to reduce slightly.

On the cutting board using two forks, carefully shred the brisket into small strands. Add 1-2 cups of the pureed cooking liquid to the pulled brisket for additional moisture and flavor.

Serve in a large bowl and allow guests to top latkes, or spoon small amounts of brisket on each latke for a more elegant presentation.

To make the latkes:

Using the shredding attachment of a food processor or a hand grater, coarsely great potatoes, onions and garlic. Place in a large bowl.

Heat vegetable oil in a large skillet over medium heat. Using your hands, make a small latke patty and squeeze out excess liquid again. Fry for 3-4 minutes on each side, until golden brown. Remove from pan and place on wire cooling rack placed on a baking sheet, which you can place in a warm oven until ready to serve. 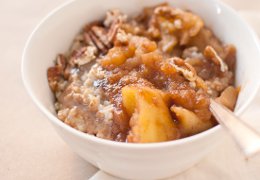 Peel, core and chop the apples into 2-inch chunks. In a heavy, nonreactive Dutch oven or saucepan over medium heat, combine the apple chunks, maple syrup, cinnamon and lemon juice. Cover and simmer for about 12 minutes, or until the apples have softened up a bit.

Uncover the pot and continue cooking, stirring occasionally to break up the larger chunks, until the apples are soft but still have some texture (5 to 10 minutes). Remove from heat and, if necessary, add more maple syrup, cinnamon or lemon juice, to taste. Serve warm or chilled; let it cool to room temperature before storing it in the fridge.

Fun and Festive Desserts for Hanukkah!
Is Grease the Word?
Dried Fruit Compote
Scientific Curiosity and the Divine Encounter
Comments
MOST POPULAR IN Chanukah
Our privacy policy
Aish.com Is Looking for Great Writers