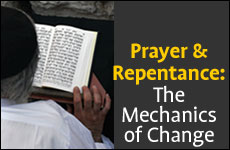 The Jew stands in self-judgment in an act of personal improvement.

(2) What is the meaning of the Jewish term for prayer, Tefillah, and how does the concept of prayer differ for the Jew?

(3) Why would a Jew who is ill be told to change their name?

(4) How does Christian confession bring a person to atone for sin?

(5) What are the three steps to teshuva, and how does the teshuva process differ from Christian confession?

(6) Why does the person who has done teshuva warrant a different decree from God?

(7) What moral questions are raised by the actions of Devalera, the Prime Minister of Ireland, and of Eichmann after the Second World War?

(8) According to Judaism, can a righteous gentile have a portion in the World to Come? What would they have to do to be considered 'righteous'?

A: The word 'prayer' comes from the Latin word precare, meaning to beg. The Christian posture for prayer is to get down on one's knees, in the posture of begging. In Christian theology, Man is burdened with Original Sin and is likely to fall. He must beg for God's mercy, because he does not deserve to be saved through his actions alone. The Christian must beg God to grant salvation, even when he knows he does not deserve it. He begs for this as a free gift, for he knows he comes before God with no merit of his own.

(2) Q: What is the meaning of the Jewish term for prayer, Tefillah, and how does the concept of prayer differ for the Jew?

A: The Jewish posture for prayer is to stand erect before God. The reflexive form of the word tefillah, 'lehitpalel,' means 'to judge oneself.' The Jew stands in self-judgment and asks: Who I am and how can I better myself? How can I improve myself and my actions? When he succeeds in improving and refining his actions, he knows that he can turn to God and say, "I am a no longer the person I once was. I am a new person, and that new person deserves a different decree than the old me." Prayer is not a request for a free gift. The purpose of prayer is as a catalyst to change.

A: When a Jew changes his name, it indicates a change of identity. Changing one's identity is the only valid reason for asking God to change the decree.

(4) Q: How does Christian confession bring a person to atone for sin?

A: Confession requires a person to confess and acknowledge their sin in order to receive atonement. The person who attends confession says, "I acknowledge that I am a sinner, so help me, God, although I do not deserve it, for I am a worthless sinner."

(5) Q: What are the three steps to teshuva, and how does the teshuva process differ from Christian confession?

Teshuva differs from Christian confession. Confession requires the recognition of sin. Teshuva moves beyond that stage and requires the person to change in order for their repentance to be accepted before God.

(6) Q: Why does the person who has done teshuva warrant a different decree from God?

A: Successful teshuva creates a new person who would not choose to sin if he found himself in the same situation as before. His old decree is no longer valid, as it was given to his 'old self.' As a new person, he can turn to God and ask for a new decree, one that he has earned through the work of improving himself.

(7) Q: What moral questions are raised by the actions of Devalera, the Prime Minister of Ireland, and of Eichmann after the Second World War?

A: Rabbi Blech explores the fate of someone who has committed abominable acts of evil, like those seen in the Holocaust, but chooses to believe in Jesus. How would Christianity deal with such a person? Conversely, what would be the fate of the many pure Jews and Jewish children who went to their deaths with Shema on their lips – but not believing in Jesus as their savior? How can it be morally correct that the wicked would attain salvation, while the innocent would be consigned to hell?

(8) Q: According to Judaism, can a righteous gentile have a portion in the World to Come? What would they have to do to be considered 'righteous'?

A: Yes, a gentile can gain a portion in the World to Come, by performing good deeds.

We tend to think that the Jewish term for prayer 'tefillah' and the Christian word 'prayer' have the same meaning. However they represent two very different theological concepts.

In Christianity, Original Sin and human nature testify that an individual does not deserve to be saved by their actions alone. The word prayer comes from the Latin word precare – to beg. Prayer is a request for God's mercy. The Christian believes he must beg God to bring him salvation as a 'free gift', even though he has done nothing to deserve it.

To a Jew, there is no such thing as a 'free gift.' God gave us the responsibility of His Torah and mitzvot because He believes we are capable of 'doing it on our own.' Prayer (Tefillah) is a process of self-judgment, evaluation and change.

The reflexive form of the word tefillah – 'lehitpalel' – means 'to judge oneself.' The Jew stands in self-judgment and scrutinizes his every deed in order to identify areas for self improvement. He works on himself, changing and refining his actions for the good. When he succeeds, he turns to God in prayer to ask for a change of decree, saying, "I am no longer the person I was. Please give the new me a different, more fitting decree."

In Christianity, one goes to confession to acknowledge that they are a sinner, and turn to God to grant salvation even though he does not deserve it.

In Judaism, repentance (teshuva) is a mechanism for change with three main steps:

Teshuva differs from the Christian approach to sin, because built into the process of teshuva is a commitment to change. Just like prayer, the approach to teshuva is that if I can change myself by changing my actions, I become a new person. As a new person, I can turn to God and ask Him to change my decree, since the decision He made about the 'old me' is no longer relevant.

Rabbi Blech posits the following moral question: If every person is a sinner and salvation is achieved through the belief that Jesus atones for your sins, then it does not matter how great a sinner you are. The wicked can enter heaven, by simply believing in Jesus.

Rabbi Blech strengthens this question by exploring the responses of different individuals to the atrocities of the Holocaust. Christian doctrine dictates that even someone as wicked as Eichman could attain salvation as long as he believes in Jesus. Conversely, the Jewish men, women and children who died in the Holocaust would be consigned to Hell through their dedicated belief in One God.

Judaism believes that what matters most is deed, not creed. Judaism puts a person's deeds on the scale, rather than their beliefs. The Jew is evaluated by their actions, because what we do defines who we are. Indeed, even the gentile can merit a portion in the World to Come, if their actions – their deeds – are good. Creed is an important foundation of Judaism, but it is our actions that truly define who we are and who we become.

One Drink Too Many: My Journey of Breaking Free from Alcohol
The Scandalous History of the Aleppo Codex
Who was Two-Gun Cohen?
Why Really Everyone Believes in Free Will
Should Jews Support Ukraine?
The Jews of Cuba
Comments
MOST POPULAR IN Deed and Creed
Our privacy policy