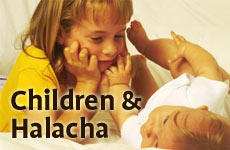 Rules for raising the next generation.

Children are a precious deposit that the Almighty entrusts to parents,1 until such age that the child achieves physical and emotional independence. This is an enormous privilege, and an enormous responsibility.

As explained in the essay, "Honoring Parents," the parent-child relationship is a metaphor for the human relationship to God. From the moment of infancy and beyond, the way a parent acts forms in the child's consciousness a paradigm for how God relates to us.2 Thus it is crucial that parents role model those behaviors and attitudes they wish to impart to their children.

And since children are heavily influenced by their surrounding environment, it is vital that parents choose a good Jewish community, with access to good Jewish schools and facilities.

Children must be taught to respect and honor their parents. In this way, the child learns to respect authority, and forms a basis for his lifelong relationship with God. For specifics, see Laws of Daily Living – Honoring Parents.

King Solomon said: "Educate the child according to his way, and he will maintain it in adulthood."3 In all areas of education, it is crucial that the parent pay close attention to the child's particular needs and pace of understanding. Some children thrive on competition; others may be crushed by it. Some children respond well to prizes; others not. Parents and teachers must adjust their approach for each child.

Mitzvot should be seen as a joyous privilege, not as a painful burden. Parents should not unduly pressure children, who may need time to acclimate and accept the set of Jewish behaviors that you are trying to impart.

Particularly when correcting a child's improper behavior, it is important not to give the child a negative feeling. The operative rule in correcting behavior is: "Push away with the left hand, and bring closer with the (stronger) right hand."4 This means that for every measure of correction, one should offer a greater measure of love.

Only when someone feels that you love them, and have their best interests at heart, will they be open to receiving your criticism.5

A Jewish boy becomes obligated to fulfill the mitzvot at age 13, and a girl at age 12.6 This is because girls tend to mature earlier than boys, both physically and emotionally.7

However, in order that children are properly trained to perform the mitzvot when they reach the age of obligation, parents must accustom them at an earlier age. This is a rabbinic mitzvah known as chinuch.8

In training children, it is important that they be taught not just the general idea of the mitzvah, but also the proper details. For example, in training a child to wave the Four Species on Sukkot, it is not sufficient to use something that resembles an etrog, assuming that the child is too young to detect the difference. Rather, the etrog should be kosher.9

Some may ask: Since a child has only a minimal understanding of the mitzvot, why bother performing them at such a young age? Why not wait until the child grows up a bit and develops a genuine appreciation for the spiritual meaning underlying the mitzvot?

The answer is that Judaism abides by the principle: The external awakens the internal. Accustom yourself to actions, and eventually the heart will follow. This is a pro-active approach of putting oneself in a framework which nurtures and develops inspiration – rather than waiting for the inspiration to come on its own. By doing the action, one is bound to eventually look inward and ask: What is the purpose of this mitzvah? How do I translate this physical action into spiritual inspiration?

That's much different than waiting for the opportunity to randomly arise or for the inspiration to hit.

The archetype of this idea is that a Jewish boy, at eight days old, receives a Bris Milah. Why force it on him as a baby? Why not wait and let him choose it at age 13 or 25, after he appreciates the idea behind Bris Milah? Because built into the Jewish system, from the very beginning of life, is the concept of: First get into the framework of action, and then infuse the "spirituality and meaning."10 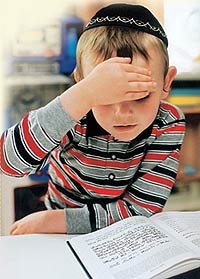 At what age should children be taught to observe the mitzvot? Obviously a 2-year-old cannot be instructed in the detailed laws of Shabbat!

For positive "to-do" mitzvot, children should be trained when they become old enough to relate to them.11 A general rule of thumb is that children are taught from age 6, though this will vary depending on the mitzvah.12

Back to our example of the etrog: At age 6, a child is typically old enough to understand that God commanded us to do this mitzvah, and additionally the child has the dexterity to properly hold and shake the Four Species.

For mitzvot that require a simple action, for example hearing the shofar or sitting in the sukkah,13 a child may be ready by age 5. For mitzvot that also require an understanding of intent (e.g. mourning on Tisha B'Av), the appropriate age is closer to 7.14

These ages are not written in stone. Some children could be taught these mitzvot a bit earlier, while others need to be trained somewhat later.15 The main thing is to gradually familiarize a child with each mitzvah, so that this way of serving God will become natural for him.16

The initiation of some rituals are performed even earlier, for example:

Another exception is the wearing of tefillin. Children do not wear tefillin, because we assume they cannot care for them properly.22 Further, a person must be halachically "clean" while wearing the tefillin – clean in body (does not pass gas23 ) and clean in mind (does not act in a light-headed manner).24

A boy may begin wearing tefillin shortly before his Bar Mitzvah.25

Children must be trained to pray properly.26 Traditionally, even very young children are brought to the synagogue, if they will not disturb the prayers of others.27

When training a child to say blessings, for example over food, an adult may pronounce God's Name.28 If possible, the adult should say the first part of God's Name and have the child finish on his own.

Once a child can comprehend that a particular act is forbidden, the parents should teach the child to refrain from the action. This stage typically occurs at age 4.

Similarly, a parent must restrain a young child from violating a mitzvah.29 For example, if a mother observes her toddler taking a crayon to draw on Shabbat, she should stop him from doing so. Or if a father hears his daughter speaking lashon hara, he must gently correct her behavior.30

It is forbidden to give a child (of any age) something that will cause him to violate a commandment. For example, one may not feed non-kosher food even to an infant.31

In halacha, however, a fine distinction is made, which we will illustrate with the following example:

Dan comes home from shul on Shabbat evening and finds that the light in his bedroom was mistakenly left on. This will make it difficult for him to enjoy a good night's sleep. Can he encourage his child to turn off the light?

We just learned that one may not give a child something that will cause him to violate a commandment. However, it is permitted to place a forbidden item in front of a small child, for the child to play with as s/he sees fit. Therefore, one could hold a very small child (age 2) in front of a light switch, and even "hint" to the child by saying, "Wouldn't it be fun to play with this knob?!"32

Further, if the child is only breaking Shabbat on a rabbinic level, and the act is something that the child needs, the child needs not be stopped from doing so.33 For example, on Shabbat where though there is no eruv, a child may be given a prayer book to carry to the synagogue, provided that the child will be using it there.34

Because proper nutrition is so important, children should be given food on Yom Kippur and other fast days. From age 9 or 10, a child should be instructed to begin fasting for part of Yom Kippur.35

Because of their weak constitutions, young children are always considered in the category of "illness which is not life-threatening." Therefore on Shabbat, one could ask a non-Jew to prepare food for the child in a way that normally entails a prohibition.36 This same leniency applies to the laws of "healing" on Shabbat.

The Schwartz family has run out of baby formula for their infant, and has run out of medicine for their 2-year-old. They may ask a non-Jew to drive to the store and make these purchases for them on Shabbat.

We know that after eating meat, an adult must wait six hours before eating dairy.37 How long should a child wait?

Rosh Chodesh Av begins the period of "Nine Days" leading up to Tisha B'Av. During this time, we do not wear freshly-laundered garments (except on Shabbat) or do laundry.38 The exception is for children who constantly soil their clothes. Opinions differ until what age this leniency applies: Some are strict only to wash the clothing of children who wear diapers,39 while others extend this to children of any age who constantly soil their clothing with dirt and mud.40

As we said earlier, all mitzvot that a child performs are only on the rabbinic level. However, there is one exception in the area of vows. If a 12-year-old boy, or an 11-year-old girl, makes a vow, and s/he realizes the significance of making a vow, then it is binding on a Torah level.41 If a child (or any adult) has made a vow, a competent rabbi should be consulted.

Judaism and the Treatment of Animals
What Makes Eli Run?
The Tyranny of Materialism
Science Enters the Mysterious Inner World of Consciousness
Comments
MOST POPULAR IN Jewish Law
Our privacy policy

What Makes Eli Run?
The Tyranny of Materialism
Science Enters the Mysterious Inner World of Consciousness
BBQ Bourbon Cheese Kugel Recipe
Korach 5782: Visit to Lift the Spirit
That Time The Ivy League Found A Way To Limit Jewish Enrollment
Would You Rather Be Right or Happy?
Korach’s Unique Punishment
Who Was Josephus? The Controversial Backstory of the Famed Historian
Should I Break Up, Get Engaged or Keep Dating?
1 2 3 … 2,901 Next »