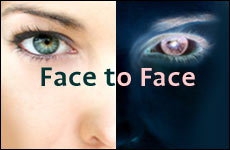 We can deeply connect to others by looking into their heart and soul, with the courage and openness to discover whatever is there.

Ever have this feeling? You are in a room brimming with people and you feel absolutely and utterly alone.

I remember that feeling so pronounced once when I was sitting at a table of acquaintances at a relative's Bar Mitzvah. It's not that I didn't know the people at my table. I did. It's not that the conversation wasn't flowing. It was. Though we were all talking amicably, we failed to really connect -- and hence the feelings of aloneness.

Then there are times when I can be sitting at home in a quiet room with one of my children or my husband. We're each doing our own thing. But the connection is palpable, and none of us feels alone.

As humans, we crave to feel connected, but there are natural barriers that prevent it. Each of us has our independent thoughts, and our own strong sense of emotions -- things that define who we are, and makes us beings. But, also, what divides us.

Intuitively, we seek to unearth that spiritual bond between us, our inner connection as humans. If we fail to do so, we sense aloneness. It's not a loneliness, but rather an aloneness -- a feeling that I and you haven't reached deeply enough to break external barriers.

Sometimes, though, we can unveil a connection even with complete strangers.

A couple of months ago, I organized a program at our Institute. I asked two women to speak about how they coped with particularly challenging, personal tragedies. I knew that their talks would be raw, honest and painful but also inspirational and full of courage.

About a week before the program, I called a friend of mine to invite her. I was taken aback by her response, "Why would I want to go to such a talk?! I have enough pain and tzorros (suffering) in my life! Why should I become upset by hearing about someone else's?"

Throughout that week, I thought about my friend's comment. I wondered if I was mistaken in choosing this topic.

But I was pleasantly relieved to see an overflow audience, with every available seat occupied.

Our first speaker, Chavi, spoke about how two years ago that week, her husband was murdered by a crazed killer, on a quiet Toronto street. It was a month before their 25th anniversary when her husband had gone out, on his birthday, to help her son, stuck a few blocks away with a flat tire. The killer shouted at her husband for being a Jew before plunging the knife, instantly killing him.

Nothing was obvious in her search for meaning and faith. She had to redefine who she was personally and find a courage she didn't believe she possessed.

The newspapers at the time were flooded with this news. But Chavi explained how that tragic moment affected her and her six children personally. How the knife that snuffed out her husband's life also shattered all their dreams and hopes for a beautiful, shared future.

But, she continued, through the horror she knew she had to become an example for her children in teaching them how to find the courage to be all that their father would have wanted, with their heads held high.

Nothing was obvious in her search for meaning and faith. She had to redefine who she was personally and find a courage she didn't believe she possessed -- for herself and for her children.

The next speaker, Orna, is a mother, whose son, at the age of two, choked on a grape. He was rushed to the hospital where he was miraculously revived and eventually began breathing on his own, but remains to this date, several years later, comatose.

Orna described how in the beginning of her ordeal she fiercely fought with the hospital doctor who wanted to pull the plug and "let God decide the outcome." Despite the horror of her situation, she bravely replied, "We are partners with God and He wants us to do our part," and adamantly refused his repeated verbal coercion.

Both of these courageous women received a standing ovation for their talks. By the time the evening was over, there were very few dry eyes in the audience.

The tremendous turn-out, as well as the receptive reception was proof enough that we as humans want to connect in the deepest way possible. We want to hear and experience what another is feeling. Sometimes, unfortunately, that only comes out, through feeling another's pain and suffering.

My friend's comments had originally bothered me, but now I had found a response.

As the Master of Ceremonies for the evening, I also spoke. I explained that there was a lesson behind God's "voice" emanating from between the Keruvim, the Cherubim in the Temple, which were in the image of two faces turned towards each other.

"God is teaching us the importance of looking into another person's face -- into another's heart and soul -- and experiencing a real connection with him.

"Sometimes, when we look into another's heart we see and share joy, smiles, laughter and happiness. We enjoy such experiences.

"And sometimes, when we look into the heart and soul of another, we see pain, tears and suffering. We don't enjoy these experiences. It makes us feel sad, tearful. We like to hide from such encounters.

"But facing such encounters, too, is what being alive and being human is all about.

"And, as we find room in ourselves to look into another's heart and soul and experience the depths of their happiness and their joy, as well as their sadness and their pain -- that is precisely where we will find the voice of God."

Chana Weisberg is the author of four books, the latest, Divine Whispers -- Stories that Speak to the Heart and Soul . Weisberg lectures on issues relating to women, faith, relationships and the Jewish soul and has currently scheduled a worldwide book tour to promote her new books. To book a talk for your community, for information on her books or speaking schedule, please contact: weisberg@sympatico.ca

The Restorative Power of Kindness

Among the Blessed
The Blue Beyond
Great Place to Live
Is Eating Supposed To Be Spiritual?
Comments
MOST POPULAR IN Family
Our privacy policy