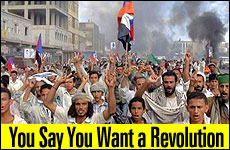 Is the "Arab Spring" good or bad for the world?

There is no question that recent events in the Middle East, starting with Tunisia, then spilling over into Egypt, Libya, Yemen, Syria and other Arab states are truly revolutionary. There is also no question that we are witnessing the biggest transformation since the creation of the modern Middle East between the end of World War I and the end of World War II. The BIG question is: "Are these changes good or bad for the Middle East, and for the world?"

There is a tendency in the West, and in America in particular, to view revolution as a good thing. This perception comes largely from our historical experience – that the events of 1776 and the outcome were extremely positive, leading to the creation of the United States – one of the most politically and economically stable and successful countries ever to exist, and the leading nation of the free world. Sure, the colonists' revolt against British rule triggered a long and costly war with England, but look at the outcome!

The success of the American Revolution leads to an assumption that events in the Arab world must be positive.

This leads to an assumption that recent events in the Arab world must be positive. Even the term "Arab Spring" commonly used in the media is derived from "Prague Spring," an attempt by Czechoslovakia to escape the oppressive hegemony of the Soviet Union over Eastern Europe. (The attempt failed and led to a Warsaw Pact invasion of Czechoslovakia. Liberation from Soviet domination wasn't achieved until more than two decades later with the collapse of the Soviet Union and the end of the Cold War.)

Before we jump to conclusions about what will be in the Middle East, let’s remember a few important points that we learn from history. (For the record, the dictionary definition of revolution is: a sudden, radical, or complete change; the overthrow or renunciation of one ruler or government and substitution of another by the governed.)

The first point is that contrary to what many people believe, statistically, most revolutions don't have positive outcomes. By positive I mean leading to the creation of stable, free, democratic and prosperous societies. If we look at the "batting average" for revolutions of the last several hundred years we see that quite the opposite is true. Even the seminal event of the Enlightenment – the French Revolution of 1789 – degenerated into a reign of terror followed by Napoleon and massive war that engulfed most of Europe.

The Russian Revolution of 1917 and the Chinese civil war and communist takeover in 1949 led to the creation of anti-democratic, totalitarian regimes that ultimately caused the deaths of tens of millions of citizens and massive suffering, economic hardship and political oppression. The same is true of Cambodia, North Korea, Cuba… the list goes on and on.

Even the modern Middle East, prior to all the recent upheaval, is largely a by-product of a long list of military coups and revolutions:

Another big lesson we see from history is that revolutions are like recipes, where the success of any recipe depends largely on the ingredients used by the cook. In the case of revolution, the main ingredient is the people. Countries with populations that have strong concepts of the rights and responsibilities of the individual, and a history of individual initiative and free market economics, tend to create revolutions with positive outcomes. The American Revolution is an excellent example and unfortunately a rarity. Countries whose citizens do not share these values and ideologies will usually create revolutions that end poorly – corrupt, totalitarian regimes that are politically oppressive and economically backward. We see from history that this (and not the American example) is the norm.

It is these two points that must be considered when looking at the future of the Arab Middle East. The countries in turmoil today do not come from a past steeped in the traditions of democracy, capitalism, free speech or industrialization. With the exception of Israel, no country in the Middle East is democratized or industrialized. The opposite is true. For the most part these countries come from a long tradition of tribalism, totalitarianism, corruption, rigid intolerance, little or no education, oppression of minorities and women, and economic stagnation.

(The only commodity keeping the region afloat, for better and for worse, is oil which has given massive influence to a few families and leaders and has largely stifled other economic development in the region.)

Radicals are most likely to gain politically from the current turmoil.

In the Middle East, the most powerful ideological force that pervades the collective consciousness is Islam, and the most extreme and dangerous form of this ideologically is espoused by the Shiite theocracy that rules Iran. Islamic movements (many of which are supported by the Iranian Republic and Al Qaeda) such as the Muslim Brotherhood are also some of the best-organized groups in the region and the most highly motivated. The Muslim Brotherhood was severely repressed during the Mubarak regime in Egypt and is now free to openly operate. These are the groups most likely to gain politically from the current turmoil in the Middle East, and may well emerge as the ruling leadership or major coalition partners in many countries of the region.

This is precisely the trend we are beginning to see in countries like post-Mubarak Egypt. While there is definitely a grassroots desire to see an end to corruption and oppression, and greater political freedom and economic prosperity, there is also a growing realization that Islam is factoring heavily into the equation. This Islamitization of the population is clearly visible in the anti-American and especially anti-Israel mood on the street. It is already being translated into open Egyptian support for Hamas in Gaza (the Mubarak regime was strongly anti-Hamas) and calls by the majority of the Egyptian population to abrogate the peace treaty with Israel and cancel the sale of natural gas.

Hope for the Future

The only good news is that Iran is itself in the throes of political instability and potential revolution. We have already witnessed brutal crackdowns on opposition movements and open protest. (The more pro-Western regimes such as Tunisia and Egypt are less likely to use excessive force against their own population while strong anti-Western regimes in Libya, Syria and especially Iran have no such compunction.) Iran is also not an Arab country and actually has a strong entrepreneurial tradition, a large well-educated middle class and very pro-Western street.

The problem is that the regime rules with an iron fist and Western support for the opposition (unlike what is happening in Libya) has been lukewarm at best. This is arguably the greatest tragedy because ironically, of all countries in the region, Iran probably has the greatest potential to emerge as a truly moderate and progressive state, yet in its current form it remains the greatest threat to both the political stability of the Middle East and the world.

If the Iranian Republic were to fall and be replaced by another regime (since Iran is so radical, any regime would be a significant improvement), the future of the Middle East could be potentially much brighter. The powerhouse of radical Islamic ideology and terrorism – especially with Bin Laden gone – will have been destroyed.

The opposite scenario is much more frightening: A stable, radical Iran in an unstable Middle East is almost a guaranteed recipe for the emergence of a much more radical, violent, anti-Western Arab world which sits on much of the world's energy resources and may well have nuclear weapons in the not-too-distant future. This is a scenario that is almost too terrifying to contemplate, yet may soon become reality.

There is a famous expression that goes: "Better the devil you know, than the devil you don't know." For the last half a century, the old Middle East, with its myriad of serious problems, was a devil we knew – it wasn't pleasant but it was somewhat predictable and stable. The new Middle East that is rapidly emerging before our eyes is a devil we don't know, but one which has the potential to be far worse. Let us pray that the Iranian regime will fall, that the forces of moderation will triumph, and that the West and especially the U.S. – history's best model for progressive, positive revolution – will not sit idly back and watch the region go up in flames.

Golda Meir, on the Palestinians

Is Israel an Apartheid State?