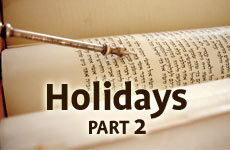 What is the Omer?

In the days of the Holy Temple, the Jewish people would bring a barley offering on the second day of Passover (Leviticus 23:10). This was called the "Omer" (literally, "sheaf") and in practical terms would permit the consumption of recently-harvested grains.1

Starting on the second day of Passover, the Torah (Leviticus 23:15) says it is a mitzvah every day to "count the Omer" – the 50 days leading up to Shavuot.2 We were freed from Egypt only in order to receive the Torah and to fulfill it; thus we count from the second day of Pesach until the day that the Torah was given – to show how greatly we desire the Torah.3

This is also an important period of growth and introspection, in preparation for the holiday of Shavuot. Many people study one of the "48 Ways to Wisdom" (Avot 6:6) each day as a means to personal and spiritual growth. An excellent tape/essay collection is available by the founder of Aish HaTorah, Rabbi Noah Weinberg.

The Omer is counted every evening after nightfall (approx. 30 minutes after sunset), which is the start of the Jewish 'day.' (In the synagogue it is counted toward the end of the Ma'ariv service.)4

The Omer may be counted with a blessing only if both of the following conditions have been met:

Restrictions During this Period

The Talmud tells us that Rabbi Akiva had 24,000 students who tragically died during the Omer period, because they did not treat each other with sufficient respect.10 Therefore, for the 33 days from Passover until Lag B'Omer, we observe these signs of mourning:

According to some customs, the 33-day mourning period begins a few weeks later – on the first of Iyar, and ends on the third of Sivan.13

Lag B'Omer, the 33rd day of the Omer ('Lag' has a numerical value of 33), marks the yahrtzeit of one of the greatest Talmudic sages, Rabbi Shimon Bar Yochai. This is a day of great celebration, because tradition says that on his death bed Rabbi Shimon revealed the secrets of the Zohar, the primary book of Jewish mysticism (kabbalah).

For centuries, Lag B'Omer has been a day of pilgrimage to the tomb of Rabbi Shimon in the Galilee town of Meiron. In one day, an estimated 250,000 Jews visit Meiron – dancing, praying, and celebrating the wonderful spiritual gifts that Rabbi Shimon bequeathed to us. Jews from around Israel light bonfires, to commemorate the great mystical illuminations that Rabbi Shimon revealed.

With the founding of the modern State of Israel in 1948, additional days of commemoration fall out during the period of the Omer.

This day honors the memory of the 6 million murdered in the Holocaust. Jewish communities around the world hold memorial ceremonies. We honor their memory by recalling their heroism in the face of inhumanity, and by strengthening our own Judaism by exploring the roots of anti-Semitism.

This day honors the memory of the Israeli soldiers who gave their lives in defense of the Jewish people – a mitzvah of the highest order. In Israel, memorial ceremonies are held at the various military cemeteries throughout the country. 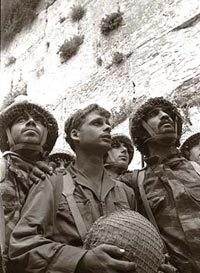 This day commemorates the restoration of a Jewish sovereign government in the Land of Israel, after 2,000 years of exile. We give thanks for the safe haven that Israel provides, and the opportunity for Jewish life to once again flourish in the Holy land.

This day commemorates the reunification of Jerusalem in the 1967 Six Day War. We celebrate by remembering the significance of our Holy City, which has stood as the capital of the Jewish nation for 3,000 years.

It is ironic that Shavuot is such a little-known holiday. Because not only is Shavuot one of the three major pilgrimage festivals, but it commemorates the single most important event in Jewish history – the giving of the Torah at Mount Sinai. This Divine revelation indelibly stamped the Jewish nation with a unique character, faith and destiny. Indeed, the Torah ideals of monotheism and justice have become the moral basis for Western civilization.

Shavuot is the culmination of the seven-week-long "counting of the Omer" that occurs following Passover. The very name "Shavuot" means "weeks," in recognition of the weeks of anticipation leading up to the Sinai experience. (Since Shavuot occurs 50 days after the first day of Passover, it is sometimes known as "Pentecost," a Greek word meaning "the holiday of 50 days.")14

Perhaps the reason for the relative obscurity of Shavuot is because the holiday has no obvious "symbols" of the day – i.e. no Shofar, no Sukkah, no Chanukah Menorah.

So how do we commemorate Shavuot? It is a widespread custom to stay up the entire night learning Torah.15 Some people study a specific text called Tikkun Leil Shavuot – "self-perfection on the night of Shavuot."

At services on Shavuot morning, we read the Biblical book of Ruth.16 Ruth was a non-Jew whose love for God and Torah led her to convert to Judaism. The Torah intimates that the souls of eventual converts were also present at Sinai, as it says: "I am making [the covenant] both with those here today before the Lord our God, and also with those not here today." (Deut. 29:13)

Ruth has a further connection to Shavuot, in that she became the ancestor of King David, who was born on Shavuot, and died on Shavuot.

On Shavuot, it is customary to decorate the synagogue with branches and flowers.17 This is because Mount Sinai blossomed with flowers on the day the Torah was given. Also, the Bible also associates Shavuot with the harvest of wheat and fruits, and marks the bringing of the first fruits to the Holy Temple as an expression of thanksgiving.18

There is a universal tradition of eating dairy foods on Shavuot. Many sources for this have been suggested, such as the verse in Song of Songs (4:11) which refers to Torah as: "It drips from your lips, like honey and milk under your tongue." Others say that upon receiving the Torah at Mount Sinai, the Jews became obligated in the laws of shechita – slaughter of animals. Since they did not have time to prepare kosher meat, they ate dairy instead.19

Tisha B'Av and the Three Weeks

During the heat of the summer, Jews commemorate a variety of tragedies that befell our nation. This period, known as the Three Weeks, begins with the Seventeenth of Tammuz, and continues until Tisha B'Av.20

The period includes two fast days, and a number of other restrictions. All these laws are detailed in the essay on Tisha B'Av and the Three Weeks.

The Laws of a Synagogue

The Jewish Approach to Death and Burial

The Jewish Laws of Travelling

Laws of Raising Jewish Children
Olivia Newton John’s Grandfather was a Nobel-Prize Winning Jewish Physicist
Don’t Believe in Other Gods Versus God is One
Seeing Without Eyes
Comments
MOST POPULAR IN Jewish Law
Our privacy policy
Aish.com Is Looking for Great Writers