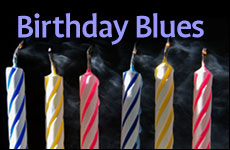 Somehow birthdays morphed into a day of doors closing behind me with a final thud.

It was my birthday and I was not in a good mood. There should be a law against children fighting on their mother's birthday.

"She took my slinky."

"It's not your slinky. It's mine. You see, there's a bend in the third ring."

Each one grabbed an end and the slinky went as taut as my nerves, finally snapping.

"Enough!" I said. The slinky bounced back against my son's hand.

I took his thumb and gently massaged it, applying the same balm to my frazzled mind.

Birthdays used to be days that were filled with heady feelings of bloomability. All of the different shades that my life might assume rolled out in front of me like an endless spool of possibilities. But somewhere along the threaded path, birthdays morphed into a day of doors closing behind me with a final thud. Suddenly there were roads that I knew I would never travel and vistas that I would never glimpse.

Based upon the map of my life I had to realistically contend with the fact that I might never actually get to see Hawaii, Beijing, or Kenya. And yet another year had passed without my learning to drive a stick-shift. And what of playing the guitar? I was too busy -- overwhelmed with the pressures of day to day life. The unbridled optimism of youth was losing its luster.

I wondered morosely, what could this birthday yield that would differ from the previous ones?

"Mommy, if I don't get a mitzvah note for school right now I'm not going to get a prize," my seven-year-old whined. Nearly a month of recording every good deed on paper so that my son could earn a prize at school was taking its toll on the mother of the household as well.

"You owe me money mommy," my oldest son called out. Having trouble with math, my son had been slaving over extra worksheets that I was giving him at home. I was paying him in change for his efforts but it was taking a whole lot of math sheets for him to save up for what he wanted.

My five-year-old daughter stuck her finger near my face.

"Look!" she said excitedly. "My teacher gave me a real ring because I cleaned up so nicely since the beginning of the year."

"That's wonderful," I said genuinely, rubbing my eye which she had nearly gouged with her ten cent ring.

But there, hovering somewhere in the middle of my monotony, a disclosure was made.

My daughter approached me first.

"Mommy," she said. "I have a birthday present for you." She handed me a white napkin, taped at the seams. I unwrapped layer after layer of napkin and tissue, until I reached the middle. Lying there was the little ten cent ring that she had received from her teacher. I sucked in my breath.

Just then my oldest son battered through the door.

"Here," he said, out of breath, holding out a bottle of cola like I had been trapped on a desert island for a few months. His eyes were literally shining. "I bought it for you with my own money. I used it all up" He plunked it on my lap.

Could it really be? All of the money he had been saving, counting, fretting over?
His younger brother ran out of the room returning moments later with a pink plastic bag. "Happy Birthday mommy," he said shyly. Inside the bag was a pair of plastic binoculars -- the binoculars that he had won in the raffle that morning. An entire month's worth of good deeds. He had barely a chance to use them before he gave away his hard earned prize.

I gathered the children around me, holding them tight as a nut cluster.

They had given me their love, in the shape of a ring, a soda bottle, and a plastic pair of binoculars.

"Thank you," I whispered, tears on my cheeks. I slipped the ring on my finger, right next to my wedding band. "Thank you so very much."

Later that night, as I lay in my bed looking out the window at the diamonds dusting the sky, my message twinkled down on me.

What had my children given to me? They had given me their love, in the shape of a ring, a soda bottle, and a plastic pair of binoculars.

By giving to me what was most dear and precious to them.

And I realized that doors were opening up around me -- all the time.

I didn't even need to go to Hawaii or Beijing or drive a stick shift to get there. It didn't matter where I lived, how many piles of laundry I still had to deal with, or how old I was. There were so many monumental thresholds just waiting to be traversed right in my own home.

It's been a few months and I still have my daughter's ten cent ring snuggled neatly between my engagement ring and my wedding band. I never take it off, so it's tarnished a bit.

But I haven't tarnished at all.

These Lights We Kindle
For Every Individual, A Torah Scroll
Allegiance To The Monarch
Meet the Real You: Yom Kippur
Comments
MOST POPULAR IN Family
Our privacy policy
Aish.com Is Looking for Great Writers