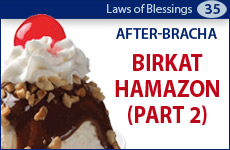 In the last class, we covered 4 of the 9 main points relating to Birkat Hamazon. In this class, we'll finish the remaining points.

In class #31, we learned about what to do when you have a doubt regarding a bracha achrona. Similar situations can arise with Birkat Hamazon. For example:

You ate a kezayit of bread (within kiday achilat pras), but the house was hectic, you got distracted, and now you can't remember if you bentched or not. This is a classic case of doubt.

As we mentioned in the last class, the Torah-level obligation to bentch is based on being satiated – i.e. "feeling full."1 (This is a subjective feeling that varies from person to person.) Therefore if you still feel satiated from the meal, and you cannot recall whether or not you bentched, you are required to bentch.2 This follows the rule of Safek D'oraita L'chumra – we rule strictly in cases of doubt where the issue is on a Torah level.3

If you cannot recall if you bentched and you did not feel satiated from the meal (or are uncertain whether you were satiated), then you should not bentch. In such a case the obligation to bentch is rabbinic, and we adopt the rule of Safek D'Rabbanan L'kula – we rule leniently in cases of doubt when the issue is on a rabbinic level.

However, the best solution is to remove yourself from the doubtful situation by 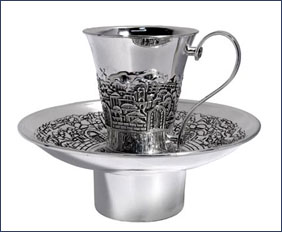 Before bentching, there is a special mitzvah to wash one's fingers; this is called Mayim Achronim (literally, "after-waters"). This washing differs in its details from Netilat Yadayim done at the beginning of a bread meal:

Once you have washed Mayim Achronim, you should not speak or make any other interruption; rather begin benching right away – within about 15 seconds.9

Before starting to bentch, the used Mayim Achronim water should be removed from the table, or covered.10

Birkat Hamazon has a special addition that is among after-brachot. When three (or more) men (age 13 and above)11 have eaten a bread meal together, we add a special introduction called zimmun (literally "invitation").12 This is based on the verse (Psalms 34:4): "And let us exalt His name together."13 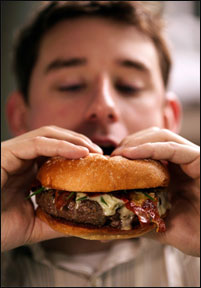 The procedure for a zimmun is that one person "leads the zimmun," while the others answer responsively, according to the text written in the prayer book. The "leader" then recites the first blessing of Birkat Hamazon out loud, while everyone else recites it quietly to himself. They then answer "amen" upon the completion of the leader's blessing.14

Who should lead the bentching? It is customary to honor a Kohen15 or a Torah scholar.16 If the honor is given to an important person (e.g. a groom or Bar Mitzvah boy), he should ask permission from the Kohen or Torah scholar that is present.17

In determining a zimmun, "eating together" is defined as either starting the meal together or finishing together.18 This does not apply at a restaurant or cafeteria where you "just happen" to be sitting in the same room as other people.19 However, a wedding meal does obligate a zimmun, because all the people are coming together for the same purpose.20

Once you have eaten together with two other people, you are obligated to join in the zimmun.21 If one member of the group wants to bentch and leave before the others have finished eating, it is permitted for that first person to lead the zimmun, while the others answer and listen to the entire first bracha – and then bentch later by themselves. (They are not technically obligated to stop for him – and if they don't want to he is obligated to wait for them. However, it is proper for them to be accommodating and to do so.)22

If only two people have eaten bread together, a third person can "complete the zimmun" by preferably eating bread. If he does not want to eat bread, he may consume with them anything that requires a bracha achrona (except water).23

Women are not counted in a zimmun with men. However:

When 10 or more men have eaten together, there is a special form of zimmun.27 As well, the leader should hold a cup of wine,28 which he drinks at the conclusion of benching.29 It is preferable to use wine also with a zimmun of 3 people.30 This is based on the verse, "I will raise the cup of salvations, and invoke the name of God" (Psalms 116:13).

A special form of zimmun is recited by Ashkenazim at a Bris Milah and at a Sheva Brachot meal.31

On certain occasions (Shabbat, Yom Tov, Chol HaMoed and Rosh Chodesh) there is a small additional phrase inserted toward the end of the Three-Faceted Blessing. If you forget to recite that phrase, then "after the fact" your bracha is still valid.32

In Birkat Hamazon, however, we add an extra paragraph in the third blessing. The extra paragraph on Shabbat is known as Ritzey,33 and on Yom Tov and Rosh Chodesh it's called Ya'aleh V'yavo.34 Also, on Chanukah and Purim we insert in the second blessing a long paragraph beginning with the words, Al Ha'nisim.35

If you began a meal before sundown (for example, on Rosh Chodesh), then even though you finished eating when it is no longer Rosh Chodesh, you should still include the appropriate extra paragraph.36 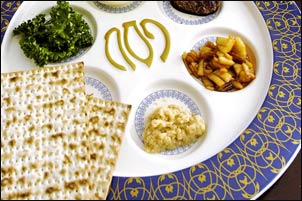 The above rules apply if you have already completed the word "Ha'El" (the sixth word) in the fourth blessing of Birkat Hamazon. If you remember your mistake at an earlier point – i.e. upon completing the third blessing, then at that point you should recite a short "make-up" blessing that you'll find printed in the prayer book.45

Though these rules may seem complex, they are worth remembering! Better yet, remind each other before bentching not to forget the extra paragraph.

In class #25 we learned that a bracha over food needs to be said in a clean and dignified environment. To briefly review: 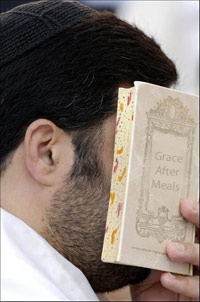 These same guidelines apply when saying a bracha achrona.

We also learned that whenever saying a bracha, you must have a separation "between the heart and lower parts." In general, to satisfy that requirement, it is sufficient, for example, to be wearing swimming trunks. However, the importance of Birkat Hamazon demands that one be fully dressed. It is not even considered sufficient to be wearing pajamas or a bath robe.46

We also learned in class #24 that when saying a bracha, it is important to maintain concentration – i.e. to be seated47 and not engage in distractions (e.g. signaling).48 With bentching, the degree of focus needs to be higher and we should make no interruption whatsoever.49 In this respect, Birkat Hamazon is likened to Shemoneh Esrei – just as we do not waver our focus during Shemoneh Esrei, so too with bentching.50

If possible, one should say Birkat Hamazon out loud,51 while reading from a prayer book.52

One Drink Too Many: My Journey of Breaking Free from Alcohol
The Scandalous History of the Aleppo Codex
Who was Two-Gun Cohen?
Why Really Everyone Believes in Free Will
Should Jews Support Ukraine?
The Jews of Cuba
Comments
MOST POPULAR IN Laws of Blessings (Adv.)
Our privacy policy