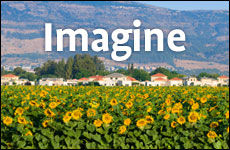 Imagine you live in a country where most things are new, and if they are not new they are very old.

Imagine you live in a country where you labor to build the institutions you need to live a life – your daughter’s high school, a center for child development, the local pizza store, a new system for emergency medicine, a software company.

Imagine that when you buy a house the land around it has never been planted, so you yourself lay the grass, and plant orange trees, lemon trees, olive trees, and passion fruit. And 21 vines of Cabernet Sauvignon.

Imagine living on a hill top and seeing the first supermarket open in your town, the first baby clinic, the first hairdresser, the first falafel store.

Imagine praying in an air raid shelter for 12 years, because it takes you that long to build a synagogue in your community. Imagine the first Friday night prayers in the synagogue when it has been built: the women crying, the men crying, the hugging and the laughing, the sense of something achieved that beats anything you have ever done before.

Imagine commuting into Jerusalem every day from Beit Shemesh, up the back road past the Soreq stream, into the hills and out by the Hadassah hospital with its helicopter landing pad on the roof. Imagine the turquoise skies on winter mornings, the yellow acacia, the pine, the wild cyclamen, and almond blossoms in the winter chill. On your way you will pass the stalagmite caves, the Nataf ancient farming community, with its terraced agriculture channels hundreds of years old, and a monastery tucked into the hillside. As you commute over the years a brand new wing of Hadassah will be built, springing up in front of your eyes.

Imagine walking up the Jaffa Road into the center of town, the pavements torn up, the shouts of the builders, construction engineers in their hard hats, the hollow cement pipes being laid into place, the traffic jams, the bus delays, the potholes in the ground, the trailing wires and then – brand new paving laid along the entire length of the street, tree saplings trees with the red mounds of “humra” laid carefully at the base of each.

And when you have lived here 25 years, when you think you probably could not experience any more building and growing and newness, the new electric trains begin to glide up and down the Jaffa Road, silent, sleek and slender on their trial journeys past the new shops and new hotels and new office buildings. Twenty children with cancer are given the first ride, because they may not make it for the grand opening later this year.

Imagine your son going to law school at the Hebrew University, where he studies Turkish law and British law and Israeli law in a building where the cornerstone was laid in 1918, while he lives in a student village built in 2008. Imagine your daughter studying Torah in a girl’s seminary on a Kibbutz in the Jordan valley, imagine her riding her bicycle every day along neatly planed kibbutz paths to the Beit Midrash, where she will study for a year, then enter the army to work in Intelligence.

At the end of a day’s work you come home to sit on your balcony and look out at the garden you have planted, the palm trees and the bougainvillea and the rosemary and lavender and jasmine, and you sip on the Cabernet Sauvignon wine you have made from your vines, and you watch the hoopoe birds with their yellow tails, the green parakeets and turquoise kingfishers who have come to live in your garden.

Somewhere a child practices on the piano, and two cats get into a fight, and you realize you had better go in and get dinner started.

Imagine there’s no countries, wrote John Lennon, but he was wrong. What are our lives without our love for the countries we live in? Especially if the country we live in lets us know, a thousand times a day, that the work we do and the children we bear and the people we befriend is something miraculous, something being carved into the universe that goes way beyond our own small, human life.

No religion too, wrote John Lennon, but what are our lives if we cannot thank God every day for the newness and the oldness, the hardhats and the traffic jams, the kingfishers and the electric trains, a synagogue so ancient that only its mosaic floors remain, a synagogue so new that a wild white rabbit, displaced from its home, is still living under the cement foundations holding up the banquet hall.

Imagine life in a region where nothing is certain and nothing is promised, nothing except the passion and the commitment and the sacrifice of the people around you, their children almost as precious to you as your own. Imagine a country at war where every second of peace is treasured and loved, where every winter downpour is prayed for and celebrated.

This is your country and there is no need for you to imagine. Your grandmother had to imagine, and her mother before her and her mother too. For centuries only the imagining was possible, but now you can step out beyond imagining into the future of a Jewish country, molding it with your own hands, bringing your voice to its government and media and culture, painting your face into its landscape. Nothing you ever do – buying a new kind of cheese in the supermarket, chatting with the bus driver on your way to work, or planting a tree in your garden will feel like it is nothing. You will feel like it is everything, and you will be right.

I asked you to imagine, but I take it back.

Katie Green is an independent film director in Israel.

The Fastest Woman in Israel is an Orthodox Mother of Five