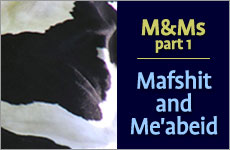 Salting and pickling your food.

It's probably safe to assume that we will not often confront the melacha of Mafshit (skinning), because it has such a limited scope. The classic illustration of this labor category is stripping hide from an animal carcass (doesn't sound very appealing). This, of course, is the next thing to be done – within the 'Order of Hides' – after the animal has been slaughtered.

Mafshit applies also to any separation of skin from its original place. So, for example, removing raw chicken skin from the chicken would be an application of this melacha.2 However, removing cooked skin would not be.3 Why?

As we've seen with other melachot, an action that is normally done in the course of eating is not considered 'work' for Shabbat purposes.4 With Mafshit, we have a further rationale, which is that the skin is effectively loosened during the cooking process, so when you remove it afterwards you are not really skinning in the true sense.5

Me'abeid6 – Tanning without the Sun

When we think of 'tanning', most of us conjure up an image of a sunny beach. Here, though, we're talking about the hard work of preparing a finished product from a raw animal hide. This is what allows a pretty grungy object to be transformed into beautiful (and costly) leather or suede.

Tanning involves first curing the hide (usually using salt), then adding a chemical substance to further preserve it, and then finishing its appearance by adding an oil to soften the leather or doing something else to harden it.7

How do these activities apply in contemporary life? Any improvement in a leather item would be an act of Me'abeid. Some examples: stretching out a new pair of shoes by bending them back and forth; adding oil or other liquids to leather furniture to make it smooth.8 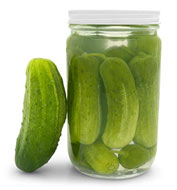 According to Torah law, Me'abeid does not apply to foods (as we just saw above with Mafshit).9 However, the Sages saw a similarity between Me'abeid and certain activities involving food; as a result, they added another layer of restrictions. The similarity has to do with the use of salt.10 Salt is used in tanning because it helps preserve the hide. Similarly, it has traditionally been used to preserve meats and other foods (think pickles). Since the physical make-up of the food changes, this act resembles the process of tanning hides.

So, does this mean that we can't use salt on Shabbat? Thankfully, no. (Where would the Jewish kitchen be without it?)

When salting food, we need to ask two preliminary questions:

What kind – The restriction applies only to foods that are preserved by adding salt. This winds up limiting the melacha to raw fish, raw meats, and raw vegetables.11

Why – Salting food so that it will be preserved – that is, it will last for a while – certainly appears like Me'abeid, since this is the same activity that was done with the hides in the Mishkan.12 On the other hand, if we are salting just for flavor, then it is allowed given any one of the following conditions:13

Each of these conditions reflects how Me'abeid comes into play only when what you're doing is similar to actual curing/pickling. Let's take them one by one:

Condition #1 – Vegetables are pickled raw, so if they are cooked, the rabbinic restriction on salting doesn't apply.14

Condition #2 applies because pickling or preserving is done with a large quantity of vegetables, not with just one or a few. So if you're just salting one item, this is not at all like Me'abeid. 'One at a time' can mean you have one vegetable on your plate and you pour salt on it, or you have several on the plate but you dip each one individually into the salt.

Condition #3 – Examples of items that are pickled include cucumbers, tomatoes and radishes. Given this, it is permitted on Shabbat to salt eggs, bread, and other items not usually preserved through salting.

According to some opinions, it is also permitted to sprinkle salt on vegetables that are not in a 'form' suitable for pickling – e.g. sliced tomatoes or peeled cucumbers.15

Condition #4 – It is permitted to salt this type of food if oil is added before the salt.16 The oil neutralizes the salt's preserving and pickling ability. So if you want to salt a large bowl of salad on Shabbat, you should first add oil or salad dressing, and mix it very well.

By understanding these conditions, you can enjoy a meal that includes salt and is within the boundaries of halacha.

One additional related issue: Since a saltwater solution is a medium for tanning (or pickling), we need to avoid making it on Shabbat. This includes adding salt to any large volume of water, as well as making a very heavily salted solution, regardless of the amount of water in it. The Sages define 'heavily salted' as a ratio of two parts salt to one part water.17

Laws of Shabbat
previous
Article #33 of 34
next
Like What You Read?  Give Jews around the world the chance to experience engaging Jewish wisdom with more articles and videos on Aish. It would make your mother so proud and as a nonprofit organization it's your support that keeps us going. Thanks a ton!

25. Gozez: No Need to be Sheepish
The 21st President of the United States: Failure or Inspiration?
Hiding Their Jewishness
The Jewish Pope: Following the Questions Home
Comments