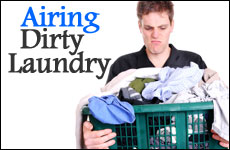 How to do laundry for dummies. And by that, I mean husbands.

When I was a bachelor, the way I decided which clothes to put on in the morning was by sniffing them. And if it was something like socks, I would have to make a decision: Do I change both of them? Or only the one that smells more?

But then when I got married, my wife insisted that I change my socks every single day, in part because we lived in an apartment with only one window, which was located in the kitchen. So now I change my socks on a daily basis, despite the very valid argument, which I have presented to my wife repeatedly, that the more often I change my clothes, the more laundry there is to be done. She complains when I don’t change my clothes, and she complains when there’s too much laundry. What do these women want?

My wife complains when I don’t change my clothes, and when there’s too much laundry. What do women want?!

I don’t want to generalize, but if there’s one thing men don’t like to think about, it’s laundry. Most women will do laundry approximately every couple of days, whereas a man, left to his own devices, will not even consider doing laundry until after he has worn absolutely everything he owns, including Purim costumes. And then when he does do laundry, he will only wash his clothes. It won’t even cross his mind to wash the towels, bibs, blankets, tablecloths, oven mitts, or bath mats. In fact, he might even choose to wash only the really dirty parts of his clothes.

The way I understand it, women aren’t crazy about doing laundry either. But men are absolutely terrified of it, because they don’t understand it. I personally cannot for the life of me figure out which clothes are not allowed to go into the dryer. It seems pretty random. Why do I have to hang bath mats? I’ve never seen a bath mat shrink. I don’t understand the clothing labels that say, “Wash with, like, colors.” “Like, colors?” Is that slang? I can’t figure out which of my kids’ clothing are whose when I fold them – I generally just put them into random piles based on which child I can vaguely remember wearing them at some point, and as a result most of the clothes go into the older children’s piles, even if they haven’t worn them in years. My wife tells me I should be able to tell by the sizes, but I don’t remember what size anyone is. I don’t even remember my own size. Whenever I go to the store to buy clothes, I have to duck into the dressing room so I can twist around and check my label. Where do the put the label on men’s dress pants? I think it keeps moving around, just to annoy me. Also, I hear I’m supposed to pre-treat stains before putting the clothes in the washer. But how on Earth am I supposed to remember which clothes have stains on them? And whose idea was it to put pockets in the pants of little boys?

And where are all the socks going? I can wash my socks in a netted bag, and they will still figure out how to open the zipper and escape. We currently have a sock box containing at least 60 socks, and not one of them matches another. (Our collection goes back many years, because we never lose the single ones.) But we’re afraid to throw them out, because we have this fear that as soon as we do, we’re going to find all 60 matches. At once. And why socks? I have never, not once, lost a shirt in the laundry. I’ve also never put a blanket in there and come back 45 minutes later to find that, “Huh. The whole machine’s empty.”

I did come up with a solution to that one problem, though, back when I was single. I just bought ten pairs of socks that looked exactly the same, so that no matter how many I lost, I would never have more than one stray sock. Other than that, though, I had no idea what I was doing. But in all those years, I never shrank anything, that I noticed, and none of my coloreds ever ran. Actually, I have no idea if they ran. I had white clothes, and I had black clothes, and I always washed them separately. I had almost nothing in between, except for my grey sweatpants, which I never remembered to wash, and when I did, it was with my blacks, and as far as I know, the grey never ran into the blacks. If I’d owned anything with stripes, I probably wouldn’t have worn it, out of fear.

So here are a few helpful laundry pointers for all you husbands who are looking to help out around the house, but are deathly afraid of your wives confronting you with an entire load of laundry covered in melted crayon:

Finally, be careful about what you throw in the laundry. In our house, most of any given load is taken up by clothes that my kids didn’t wear, and I guess that is partially my fault. I walk into their room, and I notice that I can’t see the floor, because the way my kids get dressed in the morning is they go straight for the bottom item in the pile on the shelf that they can’t reach. And of course I have no idea whether or not they’ve worn any given item, nor which closet it goes in, so being the helpful cleaning husband that I am, I just dump everything into the laundry, because I don’t think of laundry as something that is going to get done in the immediate future – I see it as a problem for some other time, possibly after we move out of our house. Let the next owners deal with it. I even throw in some doll clothes. Every week we end up folding at least one item that looks like we shrunk it like crazy, and I cannot for the life of me remember which child ever wore it, or why it closes with Velcro.

But the main thing to remember, whether you are the person who does most of the laundry in your house or whether you’re her husband, is that years ago, it was a lot worse. People used to have to go down to the river, which was the Laundromat of the time, and throw quarters into the water and then beat their clothes with rocks, which was the opposite of fabric softener, and they definitely lost a lot of socks downstream. That is why, whenever you see pictures of people back then, they are all wearing sandals. Also, they’re not smiling.

Where to Take Your Jewish Date this Summer