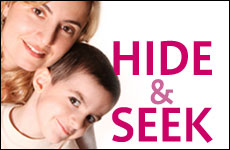 Welcome to the game of cosmic hide and seek. We are "it" and the One we are seeking is God Himself.

Who needs Arthur Conan Doyle? If we are seeking adventure, searching for an enigmatic mystery to solve, we don't need stories about Sherlock Holmes. There is a greater and more exciting quest in our daily lives. It is a game of cosmic hide and seek. We are "it" and the One we are seeking is God Himself. But God is deeply hidden. To find Him we must first understand why He hides, and then how.

In the Eighteenth Century, Rabbi Moshe Chaim Luzzatto wrote one of the most masterful presentations of Jewish belief every put down on paper: Derech Hashem ("The Way of God"). In it he explained why God created the universe. It is an arena for human action. Within it, man can grow morally and spiritually to achieve his ultimate reward: closeness to God. All the difficulties we face in life are but steps along the way, problems we must solve to further our growth -- and as this is going on, God remains hidden. Why?

Suppose I go to the governor of the state and tell him that I have a new way of rehabilitating prisoners. I can take the worst criminal and in one week turn him into a good person. The governor is intrigued. How will I do this?

I place a gun to the prisoner's head and tell him that I will be following him around for the entire week.

Quite simple. The prisoner will be released into my custody. I place a gun to his head and tell him that I will be following him around for the entire week. If he ever hurts another person, if he ever commits any criminal act, if he ever does anything wrong I will squeeze the trigger and shoot him.

Now at the end of the week, will I find that he has committed any offense against society? Of course not. But, by the end of the week will he have become a good person? Absolutely not. In fact, no moral growth will have occurred at all since the only reason the prisoner avoided criminal acts was his fear of the consequences. It was pure self-preservation. He had no thoughts or concerns as to the morality of his actions. He did not grow. In effect, he lost his free will.

God wants us to grow. If we could see His presence at all times, if we could see Him looking over our shoulders as we go through life, we would be no different than the prisoner. We would lose our free will, we would lose the freedom to transgress, and hence we would not experience the moral growth that occurs when we freely choose to do the right thing. So God must hide to give us room to become "all that we can be."

How does he hide? There are a myriad of ways, but we will consider only one. We will show how God hides through physical law.

I hold a ball in my hand, and I let it go. It falls to the ground. Again, I do it; again it falls. Why does the ball fall? A scientist would say that it is a law of nature: the force of gravity causes it to fall. But we know differently. We know that the ball falls because God makes it fall. If God wanted to, He could just as easily make the ball move upward as fall to the ground. Why, then, does He make it fall each time?

God allows us to become atheists if we so choose.

If God acts according to a pattern, in a manner we can predict, a scientist can learn this pattern and call it a law of nature. Then, if he wishes, he can say that there is no God, only absolute laws of nature that determine how the world behaves. God allows us to become atheists if we so choose. Thus, we are given free will.

What would happen if God caused the ball to rise upward? What of those very rare occasions in which the laws of nature are "violated?" A scientist would say that this is impossible, but God can choose to do anything. Those observing such an event would have a name for it -- they would call it a "miracle." But in reality it would be no less miraculous than when the ball falls down!

Albert Einstein said that he studied physics to understand how much freedom God had in creating the universe. He saw God as subject to the laws of physics. The Torah tells us otherwise. The Master of the Universe is just that: the creator of man, of physics, and even of logic itself.

God hides to give us free will, and one way He hides is through the regularities of action we lesser beings call physical law. He hides, but we seek Him. The Hebrew word for the world is "Olam," the root of which means to hide or conceal. To the Jew, the world is the hiding place, the place we seek the concealed God, and it is through the Torah, the guidebook and map to the universe, our license to "cheat," that we find Him.

Dr. Andrew Goldfinger has a Ph. D. in theoretical physics and a master's degree in counseling. He is assistant supervisor of the Space Mission Concept and Analysis Group and the Johns Hopkins University Applied Physics Laboratory, and is past Director of Space Technology Training for the Republic of China. His recent book, "Thinking About Creation: Eternal Torah and Modern Physics," is published by Jason Aronson and Co.

Why So Much Suffering?