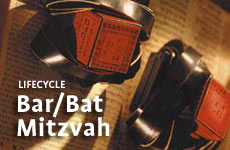 First, let's understand what the words "Bar (or Bat) Mitzvah" actually mean. The phrase literally translates to being "son (daughter) of obligation" – i.e. the person is now obligated to follow the mitzvot of the Torah.

Although we commonly refer to "having" a Bar Mitzvah, technically speaking, this is impossible. The term "Bar Mitzvah" refers to a status, in the same way being a student or being a parent is a status. One is either Bar Mitzvah or not, but one cannot "have" a Bat Mitzvah.

A Jewish boy automatically becomes Bar Mitzvah when he turns 13 years old, and a girl at age 12.1 This is true whether there is a Bar Mitzvah celebration or not.

Colloquially speaking, when people say, "I had a Bar Mitzvah," it means that they had an aliyah to the Torah in synagogue. The reason why the Bar Mitzvah boy receives this privilege is simply to notify the congregation that he is now "obligated in mitzvot" and that he can be counted in a minyan. But the aliyah to the Torah does not constitute the Bar Mitzvah. It is merely a ceremony attached to this rite of passage. (The caterer and photographer are not essential, either!)

Few things are associated with Judaism as much as Bar/Bat Mitzvah. The significance is that on this day the young person becomes fully responsible for keeping the commandments of the Torah.

In Judaism, a mitzvah performed because one is commanded, is considered greater than a mitzvah performed voluntarily.2 This is because a person has a natural aversion to fulfilling an obligation.3 Yet overcoming this aversion is a sign of maturity, and this is what the Bar/Bat Mitzvah celebrates – reaching the stage of obligation.

In the Western world, a teenager is still considered a juvenile and not totally responsible for his actions. In Jewish law, we consider a 13-year-old boy and a 12-year-old girl to be an adult, mature enough to make moral decisions. (In general, girls tend to mature earlier than boys.)4

According to Jewish tradition, it is at this point that they are deemed ready to channel their inclination to do good and overcome their natural tendencies to put their own needs before those of others. On a deeper level, just as their bodies are growing and changing, so too their souls are growing and changing. The kabbalistic tradition tells us that a person's spiritual being has several levels of soul. A new level of soul (called neshama) comes into awareness at Bar/Bat Mitzvah time. This level is what gives a person the ability to make conscious, rational decisions.5 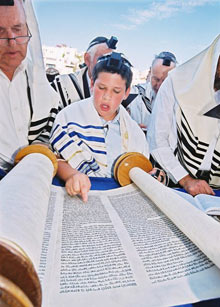 The Bar Mitzvah celebration therefore serves another purpose: to remind the young man that he is an adult and responsible for his actions. Of course, he should seek counsel with his parents and other older people, but ultimate responsibility for his actions is his own.

The best time to hold a Bar Mitzvah celebration is on the day which the young man becomes 13 years old.8 This calculation follows the Jewish calendar. If necessary, the celebration may be postponed somewhat.9

There are different practices regarding what is done at a Bar Mitzvah celebration. In order to ensure that the event has the status of a "mitzvah meal," it is proper for the young man to relate some Torah thoughts at the celebration – i.e. the famous Bar Mitzvah speech.10 In general, the atmosphere at the celebration should reflect the idea that this is a religious event.

At the first opportunity after reaching 13 years of age, the young man should be called up for an aliyah to the Torah. At this point it is customary for the father to recite the following blessing11:

The festivities should not become so ostentatious that the religious significance becomes secondary. It is important that the new adult appreciate that this is a celebration of maturity and responsibility, which will hopefully carry through for the rest of his/her life.

What is Kosher Food?

The Shulchan Aruch: How a 500 Year Old Book Shaped Jewish Practice
The Promise Of The Land
Which Chat Are You On?: Parshas Behar/Lag Ba’Omer
Do You Like Slow-Cooked Food? Thank the Jews
Comments
MOST POPULAR IN Daily Living
Our privacy policy