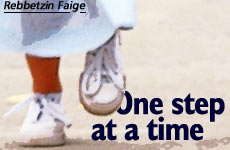 Is it useful to keep kosher when we do not observe any other religious commitments?

Sometime ago we decided to eat only kosher food. Now I ask myself everyday if this is a good thing, considering that we do not observe Shabbat and other religious commitments. I'm wondering if the fact we keep kosher now makes us "a good Jew" even though we don't respect anything else. Is it useful to keep kosher when we do not respect any other commitments? Thank you. FG.

Keeping kosher is one of the mitzvot (commandments) in the Torah. By definition, in doing a mitzvah we connect to the "mitzaveh," the commander, the Master of the Universe. Moreover, the Aramaic root word of "mitzvah" is "tzavso," companion. This suggests that in doing a mitzvah, we invite the Almighty to become a companion in our lives. Any act we do in response to God's will, invokes a relationship with the Supreme Being. By eating kosher food, we have, so to speak, made Him welcome at our table. This is no small achievement. The more precincts in our life that we invite the Almighty into, the more spiritually enriched we become.

My husband used to visit his elderly mother every morning. Arguably, from any humanitarian standpoint, we might contend that visiting an elderly parent is no more than the right and decent thing to do. Nonetheless, he would pause at the threshold of her home and recite a short prayer, dedicating this gesture of according honor to his mother to the will of God who declared it a mitzvah. As such, he removed the act from the limited, non-religious "do good" parameter and sublimated it to a mitzvah whereby it became an act connecting him to the infinite Eternal Being.

One might argue that the act is the same, regardless of intent. However, that which is rooted in human understanding and definition becomes negotiable and eventually part of a morality by consensus, a product of rapidly changing values and attitudes of our society. A mitzvah, by contrast, is rooted in the timeless, unchanging wisdom of God. It is stable, reliable, and steadfast. It was, is, and always will be the same. Those deeds in our lives that we designate as mitzvot will have everlasting perpetuity and uncompromised foreverness, as does their "mitzaveh," their Commander.

Any mitzvah we do, regardless of what we are not yet doing, changes us and changes the world around us.

Any mitzvah we do, regardless of what we are not yet doing, changes us and changes the world around us. The person I am before the mitzvah and the person I am after having invited the Almighty into my life is totally different. The prism through which I see life, given the change in my inner world, is commensurately modified and altered. And concurrently, I have introduced positive, Godly energy into the cosmos, the world outside of me. Positive deeds enhance the world I occupy. Misdeeds, flaunting the will of the Almighty, in contrast, introduce negative, compromising energy both into my inner person and into the external world that I inhabit.

The nature of growth, generally, and spiritual growth specifically, is that it is achieved in small increments. We take on a mitzvah, like one of eating Kosher, and we integrate it into our lives. The mitzvah will speak to us. It will connect us to Jews everywhere in the world, and to Jews across time and across generations, and to a tradition of almost four thousand years. And, by virtue of this nascent connection and enhanced perspective, we may perhaps be inspired to acquaint ourselves with additional dimensions of the rich practices of our tradition.

My husband has taught on many occasions that access to the alter in the ancient Temple in Jerusalem was not steps but a ramp. According to Jewish law, this ramp is to be negotiated by placing one foot in front of the other, toe to heel. So too, spiritual growth is not achieved by big steps but by small integrated movements towards holiness.

There are no small steps in spirituality because inevitably they mark the beginning of a journey.

Neil Armstrong put it well: "One small step for man and one giant step for mankind." Similarly, there are no small steps in spirituality because inevitably they mark the beginning of a journey.

The inevitability of the journey can be a frightening thought. Hence, it might explain the reader's reluctance to assign importance or "usefulness" to eating Kosher. Consider the following humorous but insightful anecdote.

Yossi, a little 5-year-old student, stubbornly refused to repeat "aleph," the first Hebrew letter, in response to his Rebbe's instruction. Frustrated and exasperated after many attempts, the Rebbe stormed out of the room. Yossi's classmates confronted him angrily, and demanded an explanation as to why, perfectly capable as he was, did he obstinately refuse to say "aleph." Yossi matter-of-factly explained that if he conceded and identified the "aleph", predictably, the Rebbe would soon demand of him to read the next letter "bet." He was stopping right now, at the beginning, and not getting sucked into the resulting learning process.

I commend the reader for the decision to eat Kosher. I don't know the particulars, but generally speaking, it takes courage to venture out into new uncharted territory. While the judgment of who is "a good Jew" can be made only by God, who has total knowledge of our lives and circumstances, I would venture that your commitment flows from your "yiddisha neshama," your Jewish soul. Giving life and expression to your Godly spiritual investiture can only be good.

Parenthetically, I would caution the reader about voices out there or internal ones that question the "usefulness" of her decision. Inevitably, she will encounter accusations of "hypocrisy", i.e. if you don't keep Shabbat and all other mitzvot, the inconsistency of observing merely one mitzvah makes you a hypocrite. Be advised that in fact these statements are not only not "useful" -- they are completely erroneous and undermine our resolve. Firstly, human beings can never be totally consistent. Even those who pride themselves in being observant have lapses in guarding their tongues, tempers, etc. which in no way invalidates the mitzvot they do observe. Secondly, the journey up the mountain begins with a single step. And lastly, every positive deed is precious in the sight of God.

I would encourage the reader to keep eating Kosher and to continue learning, to expose herself to the wealth and beauty of our rich legacy, whose mitzvot and practices have hallowed and continue to hallow the lives of our people.

Entering the Palace of the King

The Jewish Perspective on Pregnancy Loss
Who Was Josephus? The Controversial Backstory of the Famed Historian
Should I Break Up, Get Engaged or Keep Dating?
Time Is Your Precious Commodity
Comments
MOST POPULAR IN Family
Our privacy policy