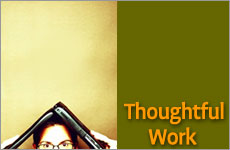 In order for an action to be considered true "work" on Shabbat, it must satisfy several conditions. These conditions relate mainly to the concept of intention. That is, my work is only 'work' on Shabbat (Hebrew, melacha1) if I intend to do the action I am doing.

This idea stems from the connection between Shabbat and the Mishkan (which we discussed in our previous segment). The work of the Mishkan is called by the Torah melechet mach'shevet – literally, 'thoughtful work'.2 (Here, we mean 'thoughtful' in the sense of 'being done with forethought'). And since the labors we avoid on Shabbat are derived from the labors done in the Mishkan, this notion of 'thoughtfulness' applies to Shabbat as well.

For any action to be 'thoughtful work', the following must be true:

Joshua is setting up a Shabbat meal in his backyard. (His guests like to dine al fresco.) His yard has a grassy area, a dirt area, and a deck area.

First, Joshua begins cleaning up the yard. He sees a tall green item and pulls it up, assuming that it is one of his children's toys. When he looks at it, he realizes that, in fact, it was a vine that was growing along the edges of the yard. (As we will learn, uprooting a plant is a melacha).

How do we evaluate what Joshua has done? Since he was not aware that he was pulling out a vine from the ground (remember condition #1 from the list), we do not say that he has violated Shabbat. Although he was aware that he was doing something, he was mistaken about what he was actually doing. This kind of action is not considered 'thoughtful.'

In this scenario, when we say that Joshua hasn't done work, we mean that his action does not meet the Torah criteria for being 'work.' However, in many cases his actions are still disallowed, due to rabbinic decree, designed to strengthen and protect the sanctity of Shabbat.

Joshua then needs to drag a bench across the dirt area of the backyard. It's possible that he will create track marks in the dirt as he moves the bench. Making such track marks is considered a form of melacha.11 Of course, this is not his intention: he wants to use the bench during the meal, and he's not interested in using the bench to landscape his yard. At the same time, he does intend to move the bench (see condition #2 in our list). 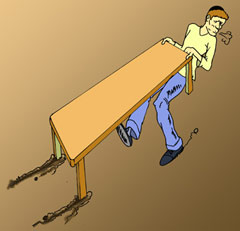 So what should Joshua do? In this situation, it depends on the foreseeable consequences of his action. If the bench is a light bench, and therefore it is unlikely for it to make any track marks, he may move it. Even though there is some possibility that track marks will be made. As long as the making of such marks is not likely, then it is fine to do. The fact that it is somewhat possible does not cause us to prohibit the action.

On the other hand, if the bench is heavy, and will inevitably make marks in the soil, Joshua is not allowed to move it. (What he can do is get some friends to help him lift it, and then it will not be dragged over the ground). The rationale here is that, when your action will inevitably result in a labor that is not allowed on Shabbat, you can't take that action – even if you don't intend for the prohibited labor to take place.12

Let's consider a similar case. Joshua wants to walk on his grass. We might think that, since tearing up grass is normally considered melacha,13 a person should keep off the lawn on Shabbat, because it's inevitable that in traversing a patch of lawn, at least some grass will be uprooted. But here's where we make a distinction: We judge each step individually, as a separate action. So even though you will for sure end up with grass on your shoes, walking across the lawn is permitted.14

Once the furniture is in place, Joshua realizes that his yard is full of mosquitoes and other bugs. Naturally, he would like to get rid of them. He sprays the plants near the Shabbat table with some pesticides. These chemicals actually aid the plants by keeping away harmful insects. So this action should be considered melacha (since improving the health of a growing plant is considered 'Zoreya' – Planting). After all, Joshua intended to spray the plants and knew what he was doing.

Here, though, his purpose was not to improve the plants; it was solely to chase away the bugs. So the spraying is not considered melacha because it was not at all done for the usual logical reason that spraying is done – as explained in condition #3.15

(Even though here, too, the action produced an "inevitable result," there is a key difference: When I drag the bench, I am directly causing the furrow to be dug. But when I spray the plant, that does not directly improve the plant; rather it just prevents the plant from becoming ruined.)

As this scenario illustrates, a person's frame of mind is central to the concept of 'thoughtful work'.

Conditions Relating to the Effect of the Action (Accomplishment)

In order to be considered melacha, an action's effect must be constructive and must be permanent.

By 'constructive' (condition #4) we mean that it resulted in something beneficial. In other words, it was not a destructive act.

By 'permanent' (condition #5) we don't mean something that will last forever, but something that is not temporary. This is a variable condition. For example, if I heat water on Shabbat I have done a melacha, even though the water will eventually return to room temperature. But in heating the water I have completed the action I have set out to do, and I have created something new.

Conditions Relating to the Manner the Action is Done

We've examined the conditions that directly relate to intent. Now let's look at another set of conditions.

We mentioned that an action needs to be done in its usual way (condition #6). If an action is done in a non-conventional way, it is not work for Shabbat purposes. For example, you are not permitted to cut your nails with a clipper on Shabbat.16 If you remove the nail in an uncommon manner – i.e. tearing it off – this is not work in the Torah sense (although, again, it is not permitted due to Rabbinic decree).

An action also needs to be done directly (condition #7). There are times when you can accomplish something indirectly. For example, when it's cold in the house during the winter, you might open a window in order to bring in cold air. This will lower the temperature and will then activate the furnace. Turning on the furnace directly would be a melacha. Doing it in this indirect way depends:

The idea of using only those people necessary (condition #8) means the following: if an action requires only one person to complete it, but several people do it, no one has done melacha. This is because no one person actually did the action on his or her own.

To round out our understanding of these ideas, here are some halachic terms:

Davar She-Aino Mitkaven – This is an action that is allowed since there is only a possibility that it will lead to something prohibited – provided, of course, that your intent is not to do the prohibited thing. (see the case of dragging the light bench)

P'sik Reisha – This is an action that on its own seems fine, but we do not allow on Shabbat, because it will inevitably cause a prohibited labor to take place. (see the case of dragging the heavy bench)

Ke-darkah – An action done in the usual way.

Shinui – An action done in an unusual way.

Gramma – An action done in an indirect way.

We learn from the work done in the Mishkan that only actions that meet certain conditions are deemed melacha on Shabbat.

There are many additional nuances to these conditions, but in this lesson we have gained an understanding of the key concepts. Now, we are ready to learn each of the 39 labor categories.

12. Borer - Part 2: Sorting Things Out
What Makes Eli Run?
The Tyranny of Materialism
Science Enters the Mysterious Inner World of Consciousness
Comments
MOST POPULAR IN Jewish Law
Our privacy policy