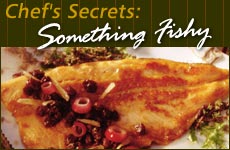 I don't usually eat fish, but these recipes are winners, especially during the Nine Days.

Before I began cooking in the yeshiva, 75% of the boys would go out for pizza when fish was served. Now almost everyone loves “fish day.” How did I do it? First, I took fish off the menu. I think it's a good rule if the family doesn't like something, then just don't serve it. With so many alternatives, why knock your head against the wall?

As time went on, I decided there were a few good reasons to try fish again. When you cook with fish, it helps you to keep the menu exciting and diversified. After all the heavy eating on Shabbat, it's refreshing to have a lighter type of food.

When properly prepared, fish is delicate in flavor and succulent. Fish cooks in a hurry, it's fairly inexpensive and contains many proteins, vitamins and minerals.

I also read somewhere that eating fish once a week reduces your chances of sudden death by any means by 25%.

How did I begin? For non-fish lovers, I use a nice fleshy fish with no skin and bones. Until you break through the fish hang-ups, you really need a fish that is like chicken. In Israel, I use Nile perch for most of my recipes.

This recipe is a lot of fun -- much easier than it looks and they'll love it!

Mint, orange peel, cinnamon and raisins give this dish the distinctive flair of North African cooking, which has become so popular. Couscous with minced green onions would be a delicious accompaniment.

Char peppers over gas flame or in broiler until blackened on all sides, turning frequently with tongs. I don't use a gas flame. I put peppers stem side down in a pan in a hot oven and cook them until the skin blackens. No fuss, no bother. I seed them but I don't peel them. Transfer peppers to medium bowl. Cover with foil; let stand 10 minutes. Peel, seed and coarsely chop peppers; return to same bowl.

Heat 1-tablespoon oil in heavy small skillet over medium heat. Add cumin and cinnamon; stir until fragrant, about 1 minute. Pour oil mixture over peppers. Mix in olives, next 7 ingredients and 2 tablespoons oil. Season salsa with salt and pepper. (Can be made 2 hours ahead. Cover; let stand at room temperature, tossing occasionally.)

Preheat broiler. Brush fish all over with 2 tablespoons oil. Sprinkle with salt and pepper. Broil until fish is opaque in center, about 2 1/2 minutes per side. Transfer fish to plates. Spoon salsa over.

Salmon, Nile Perch, or any other fleshy fish with Mustard and Dill

Place fish in baking dish skin side down. Spread with mustard; sprinkle with dill and pepper; drizzle with lime/lemon juice. Bake or microwave. Serve with pan juices.

Microwave: covered with waxed paper at 70% power for 3 minutes per inch of thickness.

Place fish in flat dish or re-sealable plastic bag. Combine remaining ingredients in a bowl and stir until sugar is dissolved. Pour marinade over fish and marinate for 15 minutes. Drain salmon/perch and place in baking dish. Grill, broil, bake, or microwave. Halfway through cooking time, baste with marinade.

Bake/grill/broil: 10 minutes per inch of thickness. (Do not turn.)

Microwave: covered with waxed paper at 70% power for 3 minutes per inch of thickness.

Making Passover While You Sleep