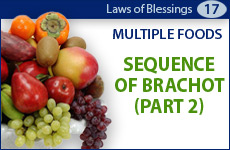 When two foods have different brachot, which bracha is said first?

In the last class, we discussed which food to say the bracha on, in a case where two foods require the same bracha. In this class, we'll discuss cases where two foods get different brachot: Which bracha should you say first?

First, let's quickly review the principles we learned in the last class:

Although all brachot express gratitude for God's benevolence, certain brachot also express specific Divine providence. For example, while Shehakol is an all-encompassing bracha that could be effective for any food, Ha'aitz is a more specific bracha, in that it is exclusive to fruits. The more specific a bracha is, the more it declares God's involvement in our world. Therefore, when eating two foods that require different brachot, the more specific bracha is recited first.

The order of precedence for brachot is:1

This is what we'll refer to as List #3. To memorize them, it is helpful to group them in three sections as follows: 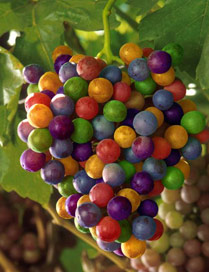 [If it helps you to see a bit of pattern in these halachot, recall in our last class (List #2 – when two foods require the same bracha) that shalem also came out ahead of chaviv.

Again, to put this information into practice, it is helpful to memorize this following short phrase:

This phrase reminds me that if two foods have the brachot Ha'aitz and Ha'adama, the order of priority is 1) shalem, 2) chaviv, 3) seven species, 4) Ha'aitz.

Sarah liked bananas more than grapes, so she said Ha'adama first and took a bite of a banana. Michelle didn't prefer one over the other, however, so she said Ha'aitz on the grapes first, since they are of the seven species. 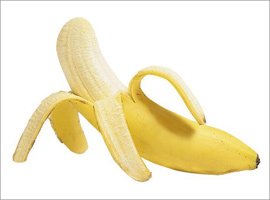 At this point, we're going to review the material learned over the last two classes. We'll refer to our famous "four lists," because the only way to really learn this material is to memorize these four lists.

Putting it into Practice

Here's a tool that may be very helpful: We are now going to go through the logical steps, of how you go about asking the right questions to determine which order to say your brachot. We're going to set this up in outline format:

Whenever you are faced with a variety of foods, the first question you want to ask is:

Do these foods have the same bracha, or different brachot?

(A) If the foods have the same bracha, then the question is:

(B) If the foods have different brachot, then the question is:

All of this logic should be clear based on the material we've learned. If it's not, review the last two classes again, until it becomes second-nature. This is very important because, typically, you will need to apply these principles numerous times each day.

Now let's put these pieces together in some practical cases, incorporating everything we've learned about the sequence of brachot. 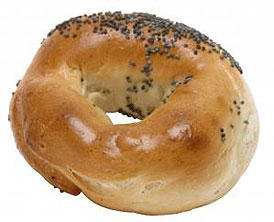 The challah and bagel both have the same bracha, Hamotzee. So the first factor to consider is the seven species. They are both made from wheat, so the next factor is shalem.

Even though the challah is larger, since the bagel is "whole," the bracha of Hamotzee is made on the bagel. (The hole in the bagel doesn't change the status of it being "whole," because it was baked that way.)

These foods have different brachot, and as we saw in the priority list (#3), the bracha Mezonot comes before both Ha'aitz and Shehakol. So in this case, you would first say a bracha on the croissant.

What's next? Although Ha'aitz comes before Shehakol in the priority list, since you don't want to eat the apple right now, you are "allowed" to say the Shehakol first. So the correct order is Mezonot, Shehakol and afterwards when you want to eat the baked apple, Ha'aitz.

This fruit salad has both brachot – Ha'aitz and Ha'adama – which follows the rules of List #4. The first factor on that list is shalem. But since these fruits are all cut up, that factor does not apply here.

The next factor on the list is chaviv. Therefore, the first bracha you should say is Ha'adama on the banana.

The next factor on the list is seven species, which means you should then say Ha'aitz on the grapes.

This concludes class #17 on Hilchot Brachot. In the next lesson, we'll learn the principles of including other foods in a bracha.

13. Other Foods at a Bread Meal

44. The Aish Academy Brachot Food Guide
Scientific Curiosity and the Divine Encounter
Mind Over Milkshakes
Love the Convert
Comments
MOST POPULAR IN Jewish Law
Our privacy policy
Aish.com Is Looking for Great Writers