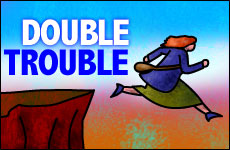 Docky had nine lives to play with; we've only got one.

Docky was a regular, grey and white feline fur-ball. Even though she wasn't the type that would stand out in a "cat-crowd," when I was two years old, I adored her.

"Dumb cat," my mother told my father. "I'm telling you she's not one hundred percent." My mother has this "thing," about cats.

My father couldn't understand why she underestimated Docky's intelligence. Until that day we were all relaxing on the porch of our third floor Brussels apartment, and Docky took a running leap and jumped right off of the porch, falling three stories to the street.

My mother ran downstairs, and within minutes, we were on the way to the vet. Docky came home with two broken legs. We still have the old pictures of her, with her legs all splinted and bandaged.

For a few weeks, Docky wasn't very mobile. It was pitiful watching her hobble around, and we waited arduously for the day that she would return to her former vigorous self.

The day the splints were removed we were all thrilled, Docky the most tickled of all. We brought her home from the vet and let her inside to run loose.

Docky bolted straight out the back door and took a running leap off of the porch again.

"She's suicidal!" my mother cried on the way to the vet to get re-splinted.

"Why didn't we put up a gate?" my father bemoaned.

"I didn't think that she was that dumb," my mother said.

Aren't we all a little bit like Docky at times?

Fast forward a few decades. I'm sitting in my kitchen table in a patch of sunlight, watching my children as they romp around the room. I am happy, for the moment.

I look at one of my children. He just can't seem to pass by things without damaging them. We've been trying to keep things out of his reach, but he's like an octopus. I watch my cherished son, all of five years old, as he slips a penny through a slat in the microwave oven.

I rise like a lion and run to the microwave.

I press the buttons on the microwave and show him the Fourth of July Fireworks.

"You can't just- break things!" I blubber. "These things cost money! Now I have to get the fix-it guy and I don't know when he'll be able to come and .."

I go on and on, using words like "always" and "never," while my son's face crumples like a wad of tinfoil.

When I finish, I close myself in my room, my thoughts swirling like a maelstrom. Why did I have to let my emotions spill out like venom at my beloved child? How could it be that the very object of my deepest love had turned me so sour? Did I care about my microwave when placed next to the self-esteem of my child?

I felt like I took a three-story jump, and my sense of equilibrium was bruised. The next day, I splinted myself and began the slow process of nursing my child back to health. I inundated him with affirmations, positives, and unconditional acceptance. Things were looking brighter, and he looked no worse for the wear.

Until he spilled the oil.

I saw it seeping under the cabinets to places I had never before cleaned or planned on cleaning. I saw it oozing into cracks and crevices like my kitchen was a scene from Ghostbusters. It was him again.

And I jumped off the proverbial porch, again.

All of the "always" and "never" words that I always wanted to never use again came dripping out with the oil. I stood there and re-opened all of the tender wounds I had worked so diligently to suture. I carried the picture of another crumpled face to bed with me that night. And I could hear my mother's voice ringing. "I didn't think she was that dumb."

Why do we humans persist with the same mistakes over and over again, like some nonsensical mantra? Why do we jump off the porch the moment we get our splints off, in that epiphany of unbridled freedom? Why do we return to self-inflicted, negative, and abusive behaviors, sometimes the moment after we heal?

I called my mother to iron out some details of the story.

"What did you do after Docky jumped off the second time?" I asked her.

"We finally built a fence," she replied.

I guess my father finally acquiesced that he had overestimated Docky's intelligence. I needed to build a fence too.

I started attending Jewish parenting classes. I learned how to view my child differently. I learned how to build him up instead of how to tear him down. I learned how to work on my own character development in terms of maintaining my priorities and my perspective, even in the heat of a small electrical fire.

I worked hard on that fence, but link by link, I built it up. Today our relationship would skate right over that oil spill and land in that sunny patch.

But some of the other fences in my life are still under construction. We can be slow learners and slow builders. And we each have lots of porches left to jump off of, even though we don't have any hind legs to fall back upon.

In the meantime, we'd best peer over those ledges and remember how far the fall is. After all, we couldn't be that dumb, could we? 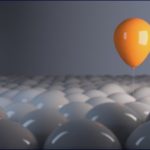 7 Ways to Become Your Best Self7 min read 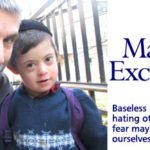 The Secret to Self-Worth1 min read