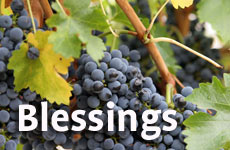 The opportunity to touch base with God dozens of times a day.

The Meaning of a Bracha

The Jewish day is punctuated with the recital of a variety of blessings (in Hebrew, Bracha; plural brachot). These blessings serve a variety of spiritual purposes:

Brachot generally begin with the phrase "Baruch Ata Adonoy" – "Blessed are You, God." We are expressing our desire that God should be blessed. Of course, philosophically we need to understand how a human can bestow blessing upon God, Who is lacking nothing, created all existence, and has infinite ability and power!

The answer is that God chose not to have the world function independently, but rather to make the world's sustenance dependent on man's spiritual efforts. God did so because He wanted man to realize his constant dependence on God – that he must constantly pray for His needs. As a result man would feel close to God and dependent upon His ongoing beneficence.4

This being the case, in a sense it is man's job to "bless God," prompting God, so to speak, to bring blessing into the world. "Baruch Ata Adonoy" thus means: May You, God, allow Yourself to exercise Your power of goodness toward mankind.5

Another word that shares a common root with Bracha is "breicha," which means wellspring. This alludes to the fact that reciting a Bracha opens up the breicha, the wellspring of blessing from Heaven. In this way, man becomes a partner with God in sustaining the world.6

This same theme is hinted to in the root letters of the word "Bracha" – bet, reish, chaf – whose numerical value are 2, 20 and 200. While the number one signifies the minimal amount of anything, two begins the series of multiplicity. The word Bracha is made up of all the "two's," hinting to the power of a Bracha to bring additional good into the world.7

Other commentators explain that "Baruch Ata Adonoy" is a statement of recognition: "You, God, are the source of all blessing." A Bracha serves as a humbling reminder that our food, other pleasures and even challenges are not solely the result of our own human choices, but rather everything is the gift of a loving God.8

This concept is reflected in the word "Bracha" which is related to the word berech, meaning "knee." In reciting a Bracha, we "bend our knees," so to speak, bowing in recognition of God's central role in providing our sustenance.9

Saying Brachot make us God's partners in bringing out the holiness of creation. Before biting an apple, we thank God for making the apple, thus making the mundane act of eating into a holy act.10

Mechanics of the Bracha

Anyone who has ever tried to pray has encountered the challenge of how and when to address God. The Talmud states that any praise we say about God is an understatement,11 like praising a billionaire for one of his dollars! The Sages of the Great Assembly resolved this problem by composing a standard set of Brachot (mat'beya shel tefilla).

Understanding the meaning behind Brachot and the power they possess can transform a monotonous habit into a deeply meaningful ritual.

There are four basic components to every bracha:

It is important to understand the names of God that appear in the brachot:

It is prohibited to say God's name in vain. This is a serious offense that is listed in the Ten Commandments.14 Thus one should not say a Bracha in an inappropriate time or manner, or if it serves no purpose (Bracha levatala).15

You may say a Bracha in any language, but the original Hebrew text is preferred.16 If you hear someone else saying a Bracha, it is proper to answer, "Amen." This is an affirmation of the blessing as a praise of God.17

The majority of blessings said during the course of a day are in the context of prayer services. For example, the Amidah's 19 blessings are said three times daily. For details, see Daily Living – Prayer.

The blessings on washing hands and using the restroom are in Daily Living – Starting the Day.

The blessing upon hearing of the death of a relative are in Daily Living – Mourning (Post-Burial).

Beyond this, there are special blessings for observing natural phenomenon like lightning, earthquakes and the ocean, and a blessing said upon safely emerging from a dangerous situation. These are discussed in Daily Living – Travel.

There are other blessings to be said upon smelling various natural fragrances. These are discussed in Daily Living – The Jewish Garden.

This class will focus specifically on Brachot recited before and after eating food.

Blessings Prior to Eating Food

The Talmud states that the entire world belongs to God, Who created everything, and partaking in His creation without consent would be tantamount to stealing.18 When we acknowledge that our food comes from God, He grants us permission to partake in the world's pleasures. Thus we say a blessing before eating any food.

The blessing that one says before eating or drinking is known as a Bracha rishona (literally, "first blessing").19 The Sages grouped all foods and drink into six different categories, and assigned each of these categories its own specific Bracha rishona.

The basic text of these Brachot begins the same way: "Baruch Ata Adonoy, Eloheinu Melech ha'olam" – "Blessed are you, God, our Master, King of the world." This phrase is then followed by the subject of the Bracha, i.e. which of the six categories the food falls into.20

The obligation to say a Bracha applies when any amount of food or drink is consumed.21

What if you want to taste the food, but not swallow? Then no Bracha is required.22

One should not make any interruption between reciting the Bracha and eating a bit of the food.23

Before eating bread (i.e. saying the "hamotzee" blessing), one is required to first do a ritual washing of the hands, along with the blessing "al netilat yadayim."24

Some Details of Brachot

NOTE: The following laws are presented in their briefest form. Please do not derive practical halacha from this essay alone. To study this topic in depth, see our 30-part Aish Academy course on Blessings.

If a person wishes to eat a variety of foods that have the same Bracha (e.g. an apple and a pear), it is sufficient to say the Bracha only once.25

If a person wishes to eat a variety of foods with different Brachot, there is an order of priority which blessing should be first, second, etc.26

An extension of this rule is if one begins a meal by making the Bracha "hamotzee" on bread, one need not say a Bracha on other foods in that meal. (There are some exceptions to this case, for example, wine or fruits eaten during the meal require their own Bracha.)28

If two people wish to eat the same food (or at least foods that share the same Bracha), it is acceptable for one person to recite the blessing, and for the other person(s) to answer "Amen" and eat as well. Prior to the Bracha being recited, both parties should have intention that the Bracha will exempt the second person as well.29

The food on which you recite a Bracha must have a good taste or a satisfying quality. If the food tastes bad (e.g. bitter medicine) or is damaging, no Bracha is said. Medicine that actually has an enjoyable taste – as is sometimes the case with children's medicine – does require a Bracha.30

As long as you have not taken your mind off further eating/drinking, you do not need to say a Bracha again, even if there are intervals in between.31 If one has left the location where one began eating, that usually requires saying a new Bracha.32

One does not say a Bracha on food that is prohibited by the Torah.33 (It's like defying God by saying, "Blessed are you God, for I am about to break one of your commandments!").34

Further, a Bracha is not said on something that is not normally eaten. The Guiness Book of World Records claims that someone once ate an entire bicycle over a period of months. If he was Jewish, he would not have needed to say any Brachot over the bicycle.35

Once we have been satiated, we again bless God, expressing our appreciation for what He has given us. The blessing that one recites after eating or drinking is known as a "Bracha acharona" (literally, "after-blessing").36

The Midrash37 relates that Abraham's tent was pitched in the middle of an intercity highway, and open on all four sides so that any traveler was welcome to a royal feast. Inevitably, at the end of the meal, the grateful guests would want to thank Abraham. "It's not me who you should be thanking," Abraham replied. "God provides our food, and sustains us moment by moment. To Him we should give thanks!" Those who balked at the idea of thanking God were offered an alternative: Pay full price for the meal. Now considering the high price for a fabulous meal in the desert, Abraham succeeded in inspiring even the skeptics to "give God a try."

While most of the food blessings were instituted by the Sages, one food-related blessing is a Torah-level obligation: Grace After Meals (Birkat Hamazon). The obligation is based on Deut. 8:10: "You shall eat, and be satisfied, and bless."

"Grace After Meals" is said only after eating a meal that included bread.38 If the meal did not include bread, then the rules are as follows:

The "Three-Faceted Blessing" (Bracha Me'ein Shalosh) is said if you ate a minimum quantity of either:

For all other foods, the following after-bracha is said:42

To be required to say an after-bracha, you must have eaten at least a kezayit of food, approximately 28 grams.43 The blessing must be said within 72 minutes of having finished eating.44

The story is told of a chassidic rebbe who took an apple in his hand, and his student took an apple as well. Each of the men said a Bracha and began to eat. When they were finished, the rebbe said to his student:

"Do you know the difference between you and me? You were hungry and wanted to eat an apple. But to do so, you first needed to say a Bracha. In my case, I looked around at the beauty of our world and desperately wanted to call out in praise of God. Since our Sages made Brachot the context to praise God, I needed to take an apple. In other words, you said a Bracha to eat the apple, and I ate the apple to say a Bracha!"

On a variety of levels, Brachot are a tremendous opportunity to "touch base" with God dozens of times a day.

Jewish Laws and Traditions after Birth