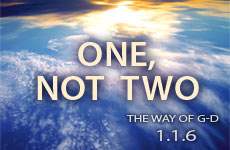 It is impossible for there to exist more than one G-d. 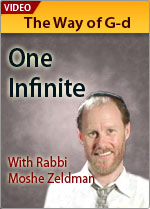 Among the things that it is also necessary to know is that G-d must be absolutely one.

It is impossible that there exist more than one being whose existence in intrinsically imperative. Only one Being can possibly exist with this necessarily perfect Essence, and therefore the only reason that other things have the possibility of existence is that G-d wills them to exist. All other things therefore depend on Him, and do not have intrinsic existence.

The final point that the Ramchal wants us to understand about G-d is that He is one, and this logically must be so. Here, we're not talking about the "oneness" that we described earlier, i.e. that G-d is not composed of parts or elements. Here the idea is that there cannot be two G-ds. It is logically impossible for there to be two infinite beings. How do we know that this is so?

Let's try for a moment to entertain the notion of two infinite beings – two beings where each is defined as infinite, unlimited, formless, independent and perfect. Let's call them G-d-1 and G-d-2. If they're both perfect, it seems self-evident that G-d-1 can't have anything that G-d-2 doesn't have. Otherwise G-d-2 would be lacking and therefore not perfect and unlimited.

So the question becomes – what makes them "two"? How can we distinguish between them? Even if we were to talk about two identical tennis balls, on a fundamental level, they're not identical at all. They each have the same shape, but one is made out of a bunch of molecules and the second is made out of an entirely different bunch of molecules. One is on the left side of the table, and the other one is on the right side. They occupy two totally separate areas of space. So on this level of description, the two balls are not the same at all.

And if we're considering the possibility of two G-ds, as soon as you say that something that distinguishes #1 from #2, you're forced to admit that each one cannot be infinitely perfect.

It would be like someone saying that they have two tennis balls – but they are the same in every way – exactly the same shape and size, composed of exactly the same molecules, and both occupying exactly the same position on the table. I'd have to say that that person is either confused, or seeing double! In physical terms, there's no way there can actually be two such balls.

Even though it's clear that the example of tennis balls proves the point in physical terms, maybe things operate differently when you speak of the meta-physical. We've spent enough time in this chapter appreciating that G-d is far, far removed from any notion of physicality. So how can we know this idea of G-d being "one" fully applies?

If we think about it, we realize that even going beyond tennis balls, and into abstract notions like love, morality, emotions, laws, the same idea holds true.

Let's say a psychologist is trying to describe the discovery of a new emotion. He tells you that it's similar to love, feels exactly the same, comes from the same stimulus, and creates exactly the same pattern of brain waves. You ask him what makes it different than love. He tells you, "Nothing. It's exactly the same in every way and there's absolutely nothing to distinguish it from love." We would be forced to conclude that there's no new emotion being described at all.

There's one last possibility that we should consider. Could G-d, if He wanted to, create another G-d?

The Ramchal says, "It is impossible that there exist more than one being whose existence is intrinsically imperative." How is this so?

Let's say that G-d created another G-d. That second G-d, by virtue of being created, is clearly not a being "whose existence is intrinsically imperative." Otherwise it would have already existed and would not (and could not) have been brought into existence.

We therefore see that there are six basic principles [in understand G-d]:

We see that the Ramchal chose to summarize the contents of this chapters into six short points. I believe he's hinting to us the idea of summarizing each chapter as we complete it. Each chapter has a specific message that becomes a critical building block in creating the edifice that is the macrocosm of Jewish mystical and philosophical thought, The Way of G-d. At each step of this way, we should look back at the steps we've taken, and appreciate the point they've brought us to.

Because this is the final segment of Chapter 1: The Creator, we will have a few extra review questions:

2. The Way of G-d: Belief and Knowledge

22. Free Will
It Takes A Lot Of Faith To Be An Atheist
How Instagram Brought Back This Nostalgic Soup
What Makes Eli Run?
Comments
MOST POPULAR IN Philosophy
Our privacy policy