14 Facts about the Unilateral Declaration of Independence 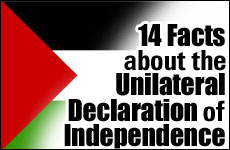 All you need to know about the Palestinian move for recognition by the United Nations.

UDI stands for a Unilateral Declaration of Independence to recognize a Palestinian state via the United Nations. UDI would fundamentally violate all of the major bilateral and international agreements that require that disputes be resolved through direct negotiations, not third parties. This includes the Declaration of Principles from 1993 that formalized the direct Israeli-Palestinian peace process. The Oslo Interim Agreements of 1995 expressly prohibits (in Article 31), unilateral action by either side to change the status of the West Bank and Gaza prior to reaching a negotiated permanent status agreement.

(2) Does Israel oppose a Palestinian state?

Israel is dedicated to two states for two peoples, living side by side in peace and security. However, this must be achieved through direct, bi-lateral negotiations between the parties, not imposed from the outside or through a unilateral declaration. Especially in light of previous agreements including the Oslo Accords, this will only complicate the road to reaching an agreement for a sustainable, secure peace. None of the core issues including borders, Jerusalem, refugees and water, will be resolved by a UN resolution. It will only harm any efforts for peace by having the Palestinians lock into positions precluding any compromise in the future and possibly triggering violence on the ground due to unrealistic expectations. The United States and other countries have warned that recognition outside of direct negotiations could have implications for continued aid to the Palestinians.

Israel wants to negotiate a settlement with the Palestinians and has made it clear that it is willing to discuss peace without preconditions. In meeting with members of Congress on August 15, 2011, Prime Minister Benjamin Netanyahu said, “I am willing to immediately start direct negotiations with [President Abbas] without preconditions. I am willing to invite him to my house in Jerusalem and I am willing to go to Ramallah.” And on September 8, Israeli Defense Minister Ehud Barak told PA President Mahmoud Abbas that it is critical that both sides “return to the negotiating table sans any preconditions. We must try and reach a breakthrough together. We must achieve this for our children and grandchildren.”

(4) What does the United States think about the PA pursuing UDI?

The United States believes that peace is only possible through a negotiated approach between the parties with mutual concessions and has made clear it will veto a UDI resolution in the Security Council if necessary. President Obama has said, “Symbolic actions to isolate Israel at the United Nations in September won’t create an independent state,” and later called it a distraction. Congress reaffirmed its commitment to a negotiated settlement of the conflict between the parties through direct Israeli-Palestinian negotiations. The Senate vote was unanimous and the House vote was an overwhelming 407-6. Many members of Congress have expressed their concern regarding UDI and indicated that they will reconsider the aid package to the Palestinians.

(5) What do the Palestinians think?

Many Palestinians have expressed concern over the United Nations declaration. In the “Palestine Papers” – confidential Palestinian Authority documents released earlier this year by Al Jazeera – lead Palestinian negotiators argued that announcing a Palestinian state without negotiating with Israel would be a mistake. Their major concern – as expressed in several memos – is that such a make-shift state would not satisfy the national hopes of the Palestinian people. Among those who have been adamantly against this approach is Prime Minister Salam Fayad. A recent study conducted for the Jerusalem Center for Public Affairs also pointed out that 40 percent of Palestinians living in East Jerusalem would prefer to become citizens of Israel rather than become citizens of a new Palestinian state.

(6) What would be the borders of this new state?

It is understood that Abbas will ask for the new state to be based on the 1967 lines, which are the 1949 armistice lines. These are the fragile lines that Israel’s late Foreign Minister Abba Eban declared as the “Auschwitz” lines due to the existential threat this could pose to the security of Israel.

(7) Can the PA declare their state in this manner?

Under the principles of international law, which were codified under the Montevideo Convention, there are four prerequisites for statehood: a permanent population; a defined territory; effective government; and a capacity to enter into relations with other States. Currently, the Palestinian Authority does not satisfy these criteria. According to the UN Charter, membership is open to states only, not movements.

(8) Why would the Palestinian Authority proceed with UDI if they don’t meet the traditional prerequisites for statehood?

UDI would symbolically raise their international status without doing the work needed to establish a legitimate state.

(9) Is there a difference in jurisdiction between the Security Council and the General Assembly?

According to the UN charter, membership to the United Nations requires Security Council consent and an endorsement from two thirds of the General Assembly. In the event that a permanent member of the Security Council exercises a veto, membership could still be attained by utilizing the obscure “Uniting for Peace” resolution, a motion adopted during the Korean War that provides for an emergency session of the General Assembly in instances where the Security Council is believed to have failed. It is of note that there is considerable disagreement amongst UN officials over the applicability of “Uniting for Peace” on questions of UN membership. Alternatively, the Palestinians could opt for a simple General Assembly recognition of statehood based on the 1967 lines. Though legally non-binding, such a symbolic international gesture could enable the new state to join other specialized agencies and petition the International Criminal Court against Israel which Abbas has long asserted as a primary goal.

(10) If UDI succeeds, would the PA accept Israel as a Jewish state? What about Jewish citizens in the new state?

(11) Would Hamas gain legitimacy if the UDI is successful?

Hamas and the Palestinian Authority signed a reconciliation agreement but the Hamas Charter still calls for the annihilation of Israel. In fact, Hamas rejects the three Quartet Principles - recognition of Israel’s right to exist, acceptance of existing agreements and an end to violence. Hamas is designated a terrorist group by many countries including Jordan, Japan, the EU, and the United States. Supporting UDI under these current conditions would result in Hamas being given de facto international legitimacy. President Obama said in May, “Hamas still hasn’t recognized Israel’s right to exist and renounce violence, and recognize that negotiations are the right path for solving this problem. And it’s very difficult for Israel in a realistic way to say we’re going to sit across the table from somebody who denies our right to exist. And so that’s an issue that the Palestinians are going to have to resolve…. I also believe that the notion that you can solve this problem in the United Nations is simply unrealistic.” The Senate’s unanimous resolution regarding direct negotiations between the parties reaffirmed opposition to inclusion of Hamas in a unity government unless it is willing to accept peace with Israel and renounce violence.

(12) What if the PA decides not to pursue statehood?

If the PA does not seek recognition of a Palestinian state, they will request to upgrade their diplomatic status at the United Nations General Assembly without compromise on any of their maximum demands on borders, refugees, Jerusalem and settlements.

(13) How does upgrading the PA’s diplomatic status to a “non-member observer state” compare with their current observer status?

This would give the Palestinians the same status in the UN as the Vatican. It is important to note that the Vatican is a sovereign state, while the Palestinian Authority is not. This change would enable the PA to become a member of other UN organizations including UNESCO and the WHO. This could enable the Palestinians to petition bodies such as the International Criminal Court (ICC) and the International Court of Justice (ICJ) with charges to try and delegitimize and isolate Israel, following the Apartheid South African model.

On Friday, September 23, President Abbas will address the United Nations General Assembly’s opening session. He may use this opportunity to present a letter to UN Secretary General Ban Ki-Moon, initiating the process at the Security Council. There could be an elongated process or steps could be taken to short circuit the required committee review and recommendation that precedes a vote. It is believed that as of now, there are not enough affirmative votes with a couple of countries still undecided. Should seven members vote against or abstain, the resolution is defeated. Should it pass, the United States has indicated it will veto. An option is delaying until the elections to the Security Council in October, in the hope they will receive more affirmative votes. Another option is for direct negotiations to be launched simultaneously with the Security Council process, perhaps beginning with a meeting on the UN sidelines. Much rests on the course to be chosen by the PA and the content of the proposed resolution.

The Myth of the Moderate Hamas

Hung Up on Israel

Don't Equate Israel’s Targeted Self-Defense with Hamas’s Aggression
The Blue Beyond
Great Place to Live
Is Eating Supposed To Be Spiritual?
Comments
MOST POPULAR IN Israel
Our privacy policy