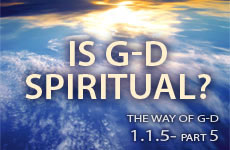 G-d is not an angel, love or peace – any more than He is wood or stone. 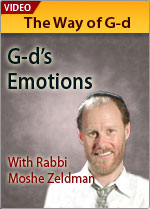 We began our discussion, however, by acknowledging that G-d's true nature is beyond comprehension. No inference can be drawn to the Creator from what we see among created things. The nature and essence of the two are not the same at all, and it is therefore impossible to draw any parallel between them.

In our last discussion, we saw the idea that we can only grasp things that are finite. We also saw that even things that are non-physical, like thoughts, souls and emotions, are also clearly in the category of being finite. All of this now brings us to further understand G-d's infiniteness. As the Ramchal says, "No inference can be drawn to the Creator from what we see among created things."

Anyone who's considered the idea of G-d knows that G-d is not physical. G-d doesn't take up space or live in the present moment. We already know from previous discussions that space and time are themselves elements of finite reality, and that G-d is the source beyond them that created them. In that sense, we called G-d "primal." So if G-d isn't physical, then perhaps we should conclude that G-d is spiritual?

Later on in The Way of G-d, we're going to see a very detailed explanation of the spiritual world, what it comprises and how, according to Torah, it functions. But even before getting there, let's just work with common understandings that people have about the spiritual realm. We might describe it as a deeper dimension of existence, a non-physical reality, unseeable, not "located" in a particular place (i.e. not space-bound). But we definitely seem to be talking about a specific "thing." It may be a thing that's not bound by the laws of nature, and a thing that's not detectable to our five senses, and maybe even unimaginable. But if the spiritual realm is an actual reality, and it's made up of spiritual "stuff" like forces and angels, we would have to say that it, too, is finite.

We would then have to say that G-d must have created it along with everything else. Therefore, if G-d created the spiritual, then G-d is not spiritual. (Just like if G-d created the physical, then G-d is not part of, or bound by, the physical.) As the Ramchal is says: "The nature and essence of the two (i.e. G-d and creation – both physical and spiritual) are not the same at all, and it is therefore impossible to draw any parallel between them."

This means that there's no possible analogy or comparison we could possibly use from anything we've ever experienced or imagined that would give us any glimpse of the true nature of an infinite being.

What's So Bad About Idol Worship?

It's interesting that out of the Torah's 613 commandments, 55 of them, almost 10 percent, deal directly with the prohibitions related to idolatry.1 Idolatry is even one of the three cardinal sins for which a Jew has to be willing to give his life.

Why is Judaism so strict about idol worship? It's because Judaism sees idol worship as the antithesis of understanding the true nature of G-d. Let's go back to something we said way back on the first line of the book – "Every Jew must believe and know that there is a first being..." The goal of everything the Ramchal has taken us through thus far has been much more than a philosophical exercise. He's telling us what the mitzvah of belief in G-d (emunah) is all about. As Jews, we have an obligation to stretch our minds as far as possible to really try and appreciate G-d, specifically the infinite nature of G-d.

The minute we try to put G-d into any kind of box, even with the full knowledge that we're just doing so to make G-d a little more graspable and easier for our minds to deal with, we've totally corrupted any ability to really know anything about G-d. And with this corruption will come a host of problems when we try to build on this corrupt and weak foundation – our understanding of the purpose of creation, G-d's goodness and justice, the meaning of our lives, and more.

It becomes easier for us to understand the deeper psychological drive of idol worshippers. It's much deeper than just a person thinking that a statue, carved out yesterday with his own hands, has special powers. In fact, Maimonides2 tells us that in the days of Enosh (one of Adam's descendants), people were having a difficulty in connecting to G-d. Adam and Eve, who had direct communication with G-d, passed down to their children an understanding of who G-d is. But as the generations went on, and the oral tradition presumably became more abstract and difficult to relate to, the generation of Enosh faced a difficulty. They knew intellectually that only G-d has true power, and that idol worship is irrational and evil. At the same time, the idea of G-d was so abstract that they had a hard time appreciating it.

So Maimonides says that they created physical objects to represent the sun, moon and stars. They didn't actually believe that these objects had power, but they felt – wrongly so – that by appreciating the sun and its powers, it would be a good stepping stone toward appreciating the power that fuels the sun – G-d.

As Maimonides says, it was all downhill from there. Each subsequent generation became less focused on the end, and more focused on the means, to the point where in the generation of Noah, real idol worship was rampant, and that became one of the reasons that G-d chose to destroy the world.

Any object or idea that represents G-d, even as a means to connect to G-d, will produce the opposite effect. G-d is not an angel, a holy man, love or peace – any more than G-d is a piece of wood or stone. Judaism demands that we keep ourselves in this intellectually difficult, but honest, position.

8. Existence as an Act of Will

14. Review of Chapter One

26. The Illusion of Imperfection
Would You Rather Be Right or Happy?
Korach’s Unique Punishment
Who Was Josephus? The Controversial Backstory of the Famed Historian
Comments
MOST POPULAR IN Philosophy
Our privacy policy