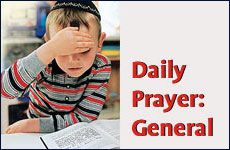 Prayer is our opportunity to speak directly to God.

Prayer is a daily obligation for every Jew, as it says: "You shall serve the Lord your God with all your heart."1 The Talmud explains: "What is service of the heart? That is prayer."2

Further, when an individual or a community faces an impending danger, the Torah requires them to call out to God in prayer.3 This obligation applies to Jews and non – Jews alike.4,5

Through prayer, mortal man has the opportunity to speak directly to the Creator of the Universe and express his needs. God listens and responds to our prayers.6 Judaism asserts that all our prayers should be directed to God exclusively. We do not pray to angels. We do not pray to deceased people. Only God can respond to our entreaties.7

There are three primary prayer services each day:

According to tradition, these three prayers were instituted by Abraham, Isaac and Jacob, respectively.8

The three daily prayers also correspond to the three main daily services in the Holy Temple: the morning Tamid offering, the afternoon Tamid offering, and the sacrificial parts that burned on the altar every evening.9 Thus one who prays is likened to having brought an offering on the altar.10

By engaging in prayer during various times of the day, we make God part of every aspect of our lives.11

Newcomers to the prayer service can sometimes feel overwhelmed by the bulk of daily prayers. It is recommended that such a person begins with just a few prayers and gradually adds to his daily ritual.12 If necessary, he can even limit himself at first to a single prayer a day. This may be done as long as it is with the understanding that over the course of time, he will be living up to all his daily prayer responsibilities. The most important prayers that are said daily are the Amidah and Shema. Beyond that, one should seek rabbinical guidance as what else take priority in his growth process. 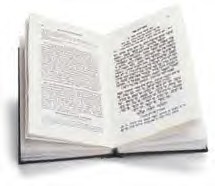 Prayers are read from a siddur,13 the Jewish religious text in widest circulation, surpassing even the Hebrew Bible.14 Siddur means "order," as it contains the established text for prayer. For English speakers, it is highly recommended to have a copy of the ArtScroll Siddur. This is translated by top – rate Jewish scholars, who understand the subtleties of both the Hebrew and English languages, and includes an explanation of all prayers, laws and customs – for everyday, Shabbat, holidays, and lifecycle events.15

Technically, prayers may be said in any language that one understands,16 however, Hebrew is the preferred language for prayer.17 One may pray in the original Hebrew text, even without understanding it.18 In any case, it is a good idea to learn Hebrew as soon as possible in order to pray meaningfully in the original tongue.

Many of the prayers are based on biblical verses, and the Amidah (for example) was composed in the fourth century BCE by the Great Assembly, led by the prophets Nechemiah and Ezra.19 Before that time, people would pray whatever was on their hearts,20 but due to the burden of the exile the Jewish nation began to lose touch with their "hearts." Therefore the Great Assembly fixed the text of the prayers, incorporating deep kabbalistic meanings into the words, so that even the simplest Jew would be able to communicate with God with the holiest words. As such, the prayer book transcends time and geography, allowing every Jew to deeply connect to the Almighty using the same words.

It is a good idea to set aside a little bit of time each day to read and contemplate the meaning of the daily prayers and special prayers.21

There are slight variations in the text of the prayers, based on community custom. The three most common texts are:

There is historical precedent for slight variations in the text; the mystical writings teach that there are 12 heavenly "windows" through which each o the Twelve Tribes submitted their entreaties. Thus, the sages originally composed 12 editions of prayer, corresponding to the differing spiritual makeup of the different segments of the Jewish nation.24

Men should pray with a minyan whenever possible.25 This is because a prayer said publicly is more likely to be accepted, as opposed to a private prayer which depends largely on one's degree of concentration.26 Further, certain parts of the service can be said only in the presence of a minyan: Kaddish27, Borchu,28 repetition of the Amidah,29 the Priestly Blessing,30 and the Torah reading.31 One should always try to pray in a synagogue,32 even if there is no congregation present at the time.33 More detailed laws pertaining to a minyan are discussed in "Daily Living – The Synagogue."

Women are also obligated to pray each day.34 However, because this is a "time – bound positive mitzvah," the specific obligation differs. A woman who needs to care for her children may fulfill her prayer responsibility with a short informal prayer.35 The details are discussed in "Daily Living – Women and Mitzvot."36

Children must be trained to pray properly.37 In fact, as soon as a child is able to speak, he should be taught to say the first verse of Shema.38 Traditionally, even very young children are brought to the synagogue, if they will not disturb the prayers of others.39

God listens to our prayers wherever we are. But prayers are better – received when recited in an established place,40 as this aids in concentration. Thus one should select a particular spot to pray unless there is some compelling reason to do otherwise.41

In general, one should try not to pray in an area where others might disturb his prayers.42 Further, since King Hezekiah turned toward the wall in order to entreat God,43 when possible it is better to pray facing a wall.44

There are certain places where one should not pray or recite blessings. For example, it is not ideal to pray in an open area that has no roof over it,45 if another place is available.46

One may not pray or recite blessings in a bathroom47 or in any place where there is a bad odor or exposed waste.48 Nor may one pray in the presence of someone who is insufficiently dressed.49

There are two mindsets when praying:

During prayer, one should be of clean mind and body. One should endeavor to remove all extraneous thoughts (about business, errands, etc.) and concentrate solely on the words of the prayers.

If one has difficulty focusing on all the prayers, he should at least concentrate properly on Shema and the Amidah. When saying the Amidah, it is especially critical to maintain focus during the first blessing.51

Before beginning to pray, put yourself into a solemn frame of mind.52 Do not pray when you are in a silly mood or when something is bothering you.53 If some foreign thought does enter your mind during prayers, wait silently until the thought leaves and then resume the prayer.54

To keep your mind from straying, it is a good idea to keep your eyes focused on the siddur.55 In fact, one should not hold anything during prayer other than a prayer book.56

When praying, one's dress should reflect the importance of the experience.57

Similarly, one's hands should be washed before prayers,58 and one should not touch any of the normally – covered part of the body during prayer.59 Before prayers, one should also use the bathroom, if necessary.60

In our next lesson, we'll be discussing the daily prayer schedule. But first, we need some basic concepts of how the Jewish day is structured.

For starters, there is the idea that the Jewish day begins with night, based on Genesis 1:5 which places evening first: "...and it was evening and it was morning."61

However, for most people it is more intuitive to think of the day as starting in the morning, so for the sake of simplicity, our discussion will begin with daybreak and continue through nighttime.

Here are the key terms to understand and remember:

Each specific prayer is discussed more fully in this class, but for now let's get the basics: 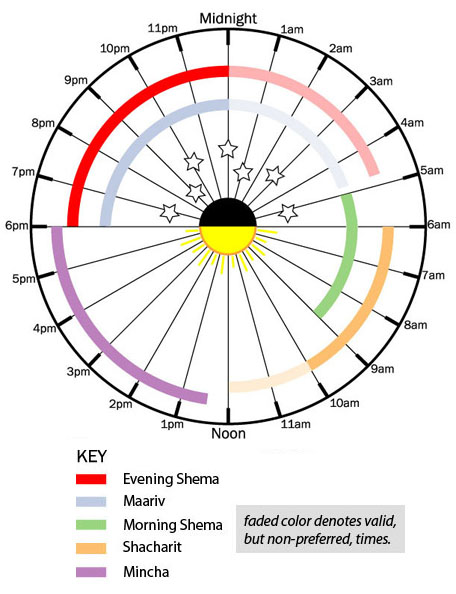 For example, let's say that in a particular city, on a particular summer day, the sun rises at 5 a.m. and sets at 8 p.m. That means there are 15 hours of "day," and 9 hours of "night." In Jewish terms, we would:

Regarding your specific local times, you can get all the information very easily by downloading a simple yet powerful Jewish calendar program.

Now that we have the basics, our next lesson will discuss the specifics of the Jewish daily prayers.

What do Jews do when they wake up?