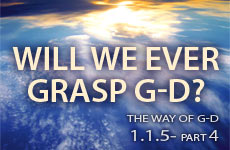 Some spiritual entities are bound by time, not space.

Admittedly, this is something far beyond the grasp of our understanding and imagination, and there hardly exists a way to express it and put it into words. Our intellect and imagination are only capable of grasping things bound by the natural limitations created by G-d, since these are the only things that our senses can detect and convey to our minds. [We are incapable of conceiving these different qualities as a single, simple Essence, since] among created things, they are different, separate concepts.

Our whole goal in this first chapter has been to try to grasp the existence and nature of an infinite being, the sustaining source of finite reality. As we've stated in the past, one can know that an infinite being exists, and at the same time, it is impossible to know the nature of this infinite being. By necessity, it's impossible for a finite mind to grasp something that is beyond finite. It's not a question of being smart enough, or having the mental capacity to deal with deep and difficult ideas. In fact, we would say that even if a person was supremely philosophically and intellectually gifted, and pondered infinite existence for 1,000 years, they would still be infinitely far away from grasping it!

So if that's the case, why bother starting the journey? Because inasmuch as I may always be infinitely far away from grasping G-d's infiniteness, I'm further ahead of where I was before I started. In other words, when we look at the journey ahead, there's no end in sight, and we know with certainty that there can never be an end in sight. That's because infinite doesn't have any such end. On the other hand, when I look back at where I came from, I've taken some significant strides ahead. We know more about G-d now than we did before we started this exploration of The Way of G-d.

The inherent problem we face is that our whole goal thus far has been to define what G-d/infinite is. Well, what does it mean to "define" something? "De-fine" means to de-limit, to proscribe limitations. If I tell you that I have a "thing" in my backyard, you have no way of imagining it. If I tell you that it's grey, you have some vague picture in your mind, but not too clear. If I tell you that it has four legs, we're getting closer. When I tell you that it's large and has a trunk and two big floppy ears (I have a big backyard), now you can picture it. For each limitation that I offer, it further clarifies the picture. When I said that it was grey, that automatically eliminated every other possible color in your mind. When I told you that it has four legs, you now eliminate the possibility of it being a bicycle.

When we examine the notion of defining altogether, we recognize that we use our five senses, along with our minds, to define and grasp things all the time. The only reason I can perceive the table in front of me is precisely because it has edges, or limitations. If the table was infinitely long, and infinitely wide and tall, and not limited by any particular weight, color or shape, then it's not a table anymore, and it's not even something that I could ever see or imagine. When we see, it's the surface (=edge =limitation) that we're seeing. The same goes with hearing. I can't hear something unless it's at a particular (i.e. finite) frequency. And the same goes with touch, smell and taste.

We can develop the idea one step further and see that this idea of perception applies just as aptly to our minds and imaginations. If you think of something in your mind, it must have some shape, form or definition. If it doesn't, it becomes unthinkable.

Of course, it's true that ideas aren't as physical and limited as thoughts are, but that doesn't make them any less a part of the finite world. Thoughts aren't subject to laws of gravity (even if you're having a heavy thought), and they don't take up space ("don't open the window, my thoughts might escape!"). But they are finite. They have specific properties. They can be described or communicated. The same is true of emotions. "Love" and "fear" have very specific definitions. Love is not fear, and fear is not love (except maybe for people with commitment issues).

We can take this concept of perception another step further. What about angels, souls and spiritual forces? (Let's assume for the sake of argument that they exist.) Aren't they infinite? They're certainly not part of the physical word. But let's go back to what we've been saying. Can a soul or angel be defined? If a soul is a spiritual entity that's attached to your body, if it can do certain things (fly around in heaven) and not others (brush its teeth), and if we each have one, all of these descriptions each connote finiteness.

The same would apply to angels and spiritual forces. An angel is not anything but an angel. It has certain powers and abilities, and those limitations make it finite. Not that it's physical, but it is nonetheless finite. One way of understanding the finiteness of these spiritual "things" is to say as follows:

Our souls are bound by time. Right now, your soul is occupying your body. Before you were born, your soul existed in a different realm. When we die, then (i.e. at that time) our souls will experience the afterworld. Our souls are always experiencing the flow of time.

On the other hand, our souls are not bound by space. What does that mean? When we die and our souls go to some heavenly realm, "where" do they go? (Judaism clearly states that we have souls, and that when we die our souls go to heaven.1 ) It sounds silly to suggest that they travel out of the body, up into the stratosphere, and then make a left past Jupiter and eventually reach Heaven. Remember: A spiritual reality can be bound by time but not space. When we die, our souls enter a different realm. It's not somewhere else.

A good analogy is love between two people. My love for my wife is not bound by space – I don't love her any less when I'm on a different continent. (However, she may start questioning it if I forget to call her...)

In the next lesson, we'll examine more of G-d's spiritual nature.

1. The Way of G-d: Introduction

8. Existence as an Act of Will

11. G-d's Expressions in This World

16. The Purpose of Creation

24. A World of Choice
It Takes A Lot Of Faith To Be An Atheist
How Instagram Brought Back This Nostalgic Soup
What Makes Eli Run?
Comments
MOST POPULAR IN Philosophy
Our privacy policy