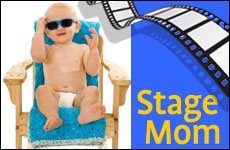 My boy got an agent and oddly enough learned what it meant to be a Jew.

Once upon a time, after 36 hours of labor, I gave birth. Now most new moms will think their progeny is beautiful. Not me. It never entered my mind. Smart, he would be. All the genes were there and accounted for. But good-looking? My family was okay but, as my bubbe would say, “Beauties, we all weren’t ... nebuch.” So his comeliness came as a complete surprise.

With both parents in media, it was inevitable that baby “Seth” would cross paths with a show biz manager. A children's manager, “Sue.”

True, I wasn’t your typical milk ‘n Oreos mom, but when Sue wanted to sign Seth to do diaper and spit up gigs, I huffed (secretly qvelling) and refused. My babe in the “biz?” Forget it! Besides, as a writer, I knew he couldn’t cut it. If any of you, dear readers, are considering show business for your infant, be warned. He (or she) will fail the “Baby” audition. Guaranteed! Especially if he’s Jewish.

No, it’s not some secret anti-Semitic show biz coven at work. It’s ... wait, I’ll show you.

BABY AUDITION. DESCRIPTION: “The infant, to be named Trevor, must appear to be 6 months of age, (Okay). He must be placid, and willing to leave his mother and go to anyone.”

A Jewish child “placid”? Willing to leave his mom? Are they meshugge?

Which is why the only “taped shoot” a Jewish babe will attend might be Aunt Sylvia and Uncle Morty’s re-commitment ceremony, with Grandpa Sol doing the “shooting.”

At around age five, the show biz kid deal flips. Once the little one has actual lines ... a script ... casting directors start screaming: “Get us a kid who can read! He’s 17?? But can he play five!”

Which is “Alevai!” time for us. And why more Jews are/were tweenie actors. (Fred Savage, Zac Efron, Jonah Bobo, for starters.)

Sue, never one to give up (hey, she’s a manager), said it was time I “got serious” about Seth’s “acting career.” At age 9, with silky hair, almond eyes, pale skin, pug nose, and an adorable tooth gap, Seth looked like a miniature, less masculine Lauren Hutton.

After talking to Seth, who shrugged his version of excitement, we “signed.”

If you’ve never dealt with a children’s manager, the first “rule” ... no, commandment?

“Thou shalt never miss an audition, or be smited by the Spirit of Shirley Temple.” You, mom, could be scheduled for an amputation, but if there’s a casting call for a kid to yell “Bonkers!” in a Life cereal commercial, the manager will tell you how a little gangrene never hurt anyone. (Besides, that “Mikey” is probably still living off his residuals.)

Suddenly, Seth and I were “on-call” 24/7, rain, shine, drought, flood, sickness, health. With him looking “perky.” After four call backs, Seth was on the short list for the new voice of “Charlie Brown.” He didn’t get it, but he was in the last four. Could my progeny be a prodigy? The next Paul Muni, Mandy Patinkin, or better still, Ben Stein? By night he could act, and by day, he could be a lawyer-economist-presidential speech writer.

Little did I know then, heaven help those parents whose child gets the part!

Newly bitten and bolstered by the “Charlie Brown” near-hit, we headed out to audition for the revival of The Rothschilds in Circle in the Square, starring Mike Burstyn. The role was Young Nathan.

Picture it. A hundred kids. A 100, precocious, baton-twirling, hoofing, fire-eating kids – and their mommies – all squeezed in the small alley next to the Greenwich Village theater. All shtarb-ing (dying) for the role.

Now, “show biz” moms are ... truly scary. Smiling and shmoozing, they first ingratiate ... then interrogate ... then annihilate any “enemy.” If Homeland Security hired them, the only “cells” left would be attached to their ears – “Myrna, my Jeremy ... is now replacing that other kid – the one whose mother had that unfortunate ... mood swing.”

Hmmm. Six years on tour ... playing a 13 year-old? Accordingly to my conservative estimate, her “kid” had to have voted in at least one Presidential primary. But ... he was four foot nine (and no, he wasn’t a little person). I staggered backward from my “new best friend” – checking for hexes. My hex-search was interrupted by the casting person, who quickly ran off the audition drill with the kids. Somewhere in there I heard “after you sing,” and “your dance number ...”

Whoa, sing? Dance?! Seth?? The other kids were warbling, tapping and tippy-toe-ing, like rabid Ann Millers. Of course, I knew The Rothschilds was a musical, but “the musical part” (like having a good-looking babe) never occurred to me. I figured Mike Burstyn did all that.

“Seth! Seth Macauley! You’re up!” I quickly checked the subway map for the fastest route back to the Bronx.

When Seth re-appeared, stymied, I asked: “What on earth did you sing?”

“‘My Yiddishe Mama.’” [Which I dutifully taught him at three.]

Seth got the part. He would play Young Nathan.

HER: I just called to tell you WE DIDN’T WANT IT ANYWAY!

ME: [SHOCKED] Then this is your lucky day!

Next stop would drive us deeper into Loonyville. The Rehearsals!

In theater, as in life, there’s a definite pecking order. Young Nathan, was “the star” of the kids, which meant that all the other kids – and their mommies – loathed us – despite the cute “WELCOME SETH” banner the children drew. I missed the skull and crossbones, but did hear, the “mommy-whispering:”

“Pssst. So, why didn’t they promote from within?” “My son created the role of Young Solomon!” “Well, mine breathed life into Young Amshel,” piped in another “who would be nothing if it weren’t for my son’s Young Solomon!”

There it was. Wafting around us. Twelve “evil eyes” – ptui!

Seth was given 10 days to learn to sing, dance, and remember the choreography. Watching him rehearse, not only Young Nathan, but an anti-Semitic street urchin (all the children doubled), I started to shvitz. How could he learn all this! In ten days, yet?! By his opening night, I was shvitzing enough to charge elderly Jewish men to stand under me.

We invited a few relatives, friends ... and street vendors. Fifty.

My husband couldn’t make rehearsals. So this was to be his first time actually seeing the show – with his son in it. He was fine during Seth’s first few scenes and numbers.

As the ugly sounds of a pogrom grow closer, “Papa” orders the family to go to the cellar. All go – except Young Nathan, who stays behind with papa, questioning why. Why don’t we fight back?! Papa explains, “They’re a mob! We ... are a family! “I looked beside me. No husband. I raced outside, and found him, shaken, and sobbing, in a way I’d never seen before, or since.

The week passed. And then it happened. The stage manager told me there was “a small problem” with Seth. He was refusing to play the anti-Semitic urchin.

“No,” she said, in a rare burst of wisdom. ‘She’s talking to him,” referring to a non-Jewish actress, playing an anti-Semitic role.

Of course, the actress comforted and explained he was just acting ... and convincingly, as the Wednesday matinee “blue-hair” lady audience sometimes forgot it was a play, and yelled: “You’re a very bad boy!”

Not long after, Seth and I decided we’d had enough.

But something had happened to Seth. Something neither of us could have possibly known. Yes, there was the shlepping. Yes, there were the “mommies and madness.” Yes, there were the cattle calls. But oh, what he gained. A child, born in the U.S. who went to Day School, but never paid much attention to “the stories,” “the anecdotes of courage” of We Jews. As with so many of his ilk, they were out of time. Irrelevant. Old.

Who would’ve thought it was, in part, through this crazy business, through theater, through acting the role of a 19th century Jewish boy, and a small anti-Semitic urchin that he would finally come to understand what it feels like – what it felt like --to be a Jew. To drink from his roots. Roots established so long ago.

And that through theater.... he was no longer blasé about that feeling.

Or, that wherever life has taken him, nor would he ever be “blasé” about being a Jew, again.