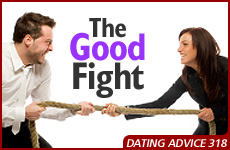 Why is everything so calm between them?

It's been my experience that every good marriage has its share of disagreements. When I was growing up I saw my own parents experience that – not harsh fighting, but clear difference of opinion that were sometimes expressed in forceful terms. I've also seen it with most of my married friends, too.

I have been dating a man for the past year, and we get along absolutely great. We share similar interests and values, and really seem to mesh. Yet I can’t seem to get out of my head something that my bubbie always said: Fights strengthen a relationship.

When I think about it, over the past year this man and I have never had a fight – or even really a disagreement! We talk through things, and are both committed to the idea of compromise, so we don't feel the need to fight.

Do we have a problem?

We're glad you asked this question. You're absolutely right that every healthy relationship has its share of disagreements. No matter how well two people relate to each other, there will be differences in their viewpoints, opinions, and ways of doing things. If they are both easygoing, even-tempered individuals, they'll take many of these differences in stride – but there will still be points of difference, and even occasional conflict. Outside of a sci-fi film, it is simply not normal for two people to agree about everything.

There can be a number of reasons why you and the man you are dating haven't experienced an argument, fight or disagreement, and believe that you are always able to talk things out or compromise.

1) It could be that one or both of you are conflict-avoidant. Such a person may regularly refrain from expressing his/her true feelings or opinions, or sweep issues that need to be addressed under the table. They may do so because they are afraid of having an argument, upsetting the other person, being judged unfavorably, or setting in motion something that will ultimately cause the relationship to end.

Suppressing one’s feelings may become a source of resentment.

There's a difference between regularly avoiding conflict, and taking a "choose your battles" approach. The latter is a healthy one to follow – taking smaller issues in stride and only raising the ones you deem to be more important. But when someone regularly avoids expressing disagreement or bringing up something that really bothers them, they are suppressing their real feelings and these may become a source of later resentment. What unfortunately often happens is that this person eventually explodes in anger over a seemingly minor irritation that became a tipping point.

2) Sometimes, a couple doesn't have arguments because one partner frequently gives in to the other. It can seem as though they're able to negotiate and work things out, but in reality one of them is capitulating so often that the relationship has become unbalanced. The person who gives in may be doing so for the reasons we mentioned earlier, or because they rationalize that the other person's reasoning and logic are better than theirs.

Partners in a healthy relationship also give into each other from time to time, such as when one decides their spouse's position is stronger than theirs, or because the issue means more to their spouse than it does to them. But all of this has to be balanced. That balance is missing when one person's feelings, opinions or values are regularly considered insignificant or less valid by one or both of the partners, or when one party dominates the relationship because they must have their own way.

3) Some dating couples don't fight because they haven't yet discussed real issues. They may consciously or unconsciously steer away from areas where they sense they differ. Alternatively, they may be focused on having a nice time together and have kept their relationship to a more superficial level. We've seen many couples who first talk about serious issues during their engagement, or after they get married, and are then shocked to discover that they're not as in sync as they thought. They may then realize that they don't know how to resolve their points of disagreement in a beneficial manner, or that they are so far apart on core issues that the very basis of their relationship is in jeopardy.

In a healthy relationship, disagreements and arguments are inevitable, and it's important for you and the man you are dating to take a closer look at the dynamics of your relationship. First, ask yourself if any of the patterns we've mentioned seems to describe what is going on. In addition, think about whether any of them describe how you handle disagreements and conflict with other people in your lives – roommates, co-workers, friends, neighbors, family members. If either of you tends to frequently avoid expressing your true feelings or thoughts, or regularly gives into the other person, or dismisses your own emotions or opinions as invalid or unimportant, we'd recommend talking to a therapist to learn how to improve your self-esteem and to speak up for yourself.

Perhaps you come from a home where your parents frequently argued.

We also suggest that each of you take a closer look at how disagreements and conflict are handled in your respective families. On the plus side, you may have developed an easy-going, give-and-take style from your own parents. Conversely, you may have adopted your family's tendency to avoid confronting difficult issues or of letting one person's opinions dominate. Perhaps your parents have a tendency to ignore important matters because they relate to each other on a superficial level. It's also possible that one of you comes from a home where your parents frequently argued, and now you avoid confrontation because you are afraid to slip into that same dynamic.

In a healthy relationship, the couple can express their thoughts, feelings and opinions. If they disagree, they have an effective way to state their arguments and come to a resolution. Sometimes, they will negotiate and reach a compromise that seems reasonable to each of them. Sometimes, one partner will "win" the round, and other times one of them will back down or give in. There will be times that they find it's best to “agree to disagree” and find some way to coexist with the disagreement. And sometimes, they'll reach a compromise that neither is thrilled about, but recognize is best for the situation.

These are skills that some people bring into a relationship naturally, because they learned them in their own homes or in other life situations. Others can develop these skills by enrolling in a couple's workshop (such as Prepare and Enrich for engaged and married couples) or by working with a couples' therapist. If you are concerned that you and the man you are dating need guidance in this area, we hope you take advantage of the many resources that can help.

If the two of you are contemplating marriage, it's especially important to discuss topics you may not have spoken about before, and to be truthful and open about your points of view. These might include life goals, religious observance, attitudes about money, and how you envision marriage and parenthood. Don't be afraid of your differences – you need to know what they are, and together develop the tools to deal with them. This attitude will serve you well through a lifetime.