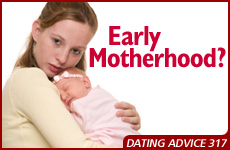 At age 22, she’s afraid of growing up too fast.

I am a 22-year-old college senior and have been dating a 28-year-old Israeli for a year now. Within the first three weeks of meeting each other in Israel, we spoke about marriage, for he believes that if you meet your soul mate you should not wait. I know he is the person I want to marry, but I asked him to wait until I finish my degree.

He has moved to the States for a year now so I can finish my degree, and after that we plan to move to Israel and get married. The fact that we are getting married within a year does not scare me as much as the fact that he wants to have children soon after. I know I can grow and build myself while married to him, but I believe it will be difficult (or impossible) to build my first career when I have children.

As a 28-year-old he has had time to build himself. However, since I am only 22, I feel that I need more time before having children. How can we resolve this conflict?

Thank you for raising a question that many young women ponder – whether it's a good idea, or even possible, to build a career at the same time as raising a family. The short answer is, "Yes, it can be a good idea and it is possible." We'll explain why we believe this is so.

The "decision" to marry and begin a family at a young age is based largely on an individual's world view. We are all products of our environment, and the attitudes of the society in which we live heavily influence our choices. As a young adult growing up in middle-class America, your cultural attitudes have likely encouraged you to spend your early adulthood focused on self-actualization and fulfillment. You've been told that this is the time to complete your education, enjoy life with few responsibilities, and explore different career and lifestyle options. You may have also absorbed the message that marriage and children should be considered – if at all – once you've built a career and achieved financial stability.

The milestones of adulthood have changed dramatically in the past generation.

There's nothing "wrong" with this scenario. It sounds quite reasonable, and many people follow that path. We heard a similar "message" when we were young adults, when many of our peers completed school, left home, became financially independent, and began careers and families in their early to mid-20s. However, the timetable to accomplish these "milestones of adulthood" has changed dramatically over the past generation. In "What Is It About 20-Somethings" (New York Times Magazine), author Robin Marantz Henig observes that 10 years ago, fewer than half of 30-year-old women, and less than a third of 30-year-old men, had made this "transition to adulthood." She predicted that the 2010 census will reveal an even lower percentage of 30-year-olds who have accepted the responsibilities of family life.

Several aspects of this trend toward prolonged adolescence disturb us. One of the most glaring ones is that this sets a stage for many young men and women to remain overly focused on themselves for years. This is the antithesis of Jewish values, which encourage us to be conscious of the greater world and to accept responsibility for others.

Another upsetting aspect of this trend is its adverse effect on Jewish demographics. Later marriage often means smaller families and fewer children, which means a smaller Jewish population (which we can ill afford), and less involvement in and support for Jewish schools, charities and institutions.

As we said, many life choices are dependent on one's world view. Let's look for a moment at young adults who come from cultures where it's more common to marry and have children at a relatively early age. You can see an example of this in many segments of the observant Jewish community. In this case, the majority of men and women who choose to marry in early adulthood are able to continue the process of self-actualization and pursue their goals at the same time they are building a marriage and a family.

Beyond this, many people don't realize that a healthy marriage is actually a primary venue for individual growth. People often experience a higher degree of self-awareness, due to marital dynamics which often necessitate a deeper consideration of one's motivations and goals. In addition, married individuals often find that because of a spouse's support and encouragement, they are able to pursue goals and interests they might not have otherwise followed. Furthermore, the experience of growing with a partner, developing the art compromise, team planning and communication, hones skills that prove invaluable in all areas of life, including the workplace. Motherhood can in fact facilitate this growth even more, with its inherent call for loyalty, self-sacrifice, performing under stress, etc.

That's not to say it isn't challenging to build a career and raise a family at the same time. But the question most of these people ask is, "How do I do it?" rather than "Do I do it?"

The how's aren't that simple, especially for a young mother. She and her husband need good child care and a commitment to share responsibilities for their children and their home. And she'll have to learn, as any working mother will tell you, that it's impossible to be a fully hands-on mother and have a high-powered career at the same time.

She will have to make choices. It may be that while her children are young, she'll work part-time or be on the "mommy track." She can work in her field, earning income and laying the foundation for when she will advance her career, but her main emphasis will be her children's lives. We know countless examples of doctors, lawyers, accountants, therapists, programmers, scientists, journalists, nurses, architects and businesswomen who have focused on raising young children while developing their careers, albeit at a slower pace than their high-powered colleagues. They gained the experience and the reputation they needed to put stronger emphasis on their careers once they felt they could devote more time to them. Some of them even chose to spend some time as stay-at-home moms.

These choices mean needing more time to build a nest egg. You may feel a twinge of jealousy when hearing about a classmate's career accomplishment. But life satisfaction isn't measured in the size of one's salary, bank account or latest job promotion. Most of the women we know who began their careers at the same time they had young children are happy with the choices they made.

It happens to be that in Israel, where you plan to make your home, women get married on average much earlier than their American counterparts. So in terms of cultural norms, having children at your age would not be at all unusual. You will find many young women at your stage of life development who are experiencing the joys and challenges of motherhood.

At the end of the day, this is a deeply personal decision. While it is certainly possible to lay the foundations for a career and have a family at the same time, you and the man you marry will have to make choices that are right for you as a couple. It may be helpful for you to speak with young women who have made this choice, to hear their point of view and see how they’ve "made it work." Since Israel, where you plan to live, is very accommodating to working moms, try to include young mothers who live there in your “research.”

Most of all, it is crucial that you speak over your concerns with the man you are planning to marry. In fact, until the two of you have delved deeply into issues such as having children, sharing responsibilities in the home, building careers, finances, and the like, you should not get engaged. You must make sure that your expectations are compatible, and that if you have any significant differences you can make mutually acceptable compromises, before deciding to build a life together.

Dating Maze #223 - Emotional Shut-Down
Why Are The Prayers Of Yom Kipur So Repetetive?
Ha'azinu 5783: A Time for Unity!
Twisted Thinking
Comments