What Yom Kippur Does NOT Atone For 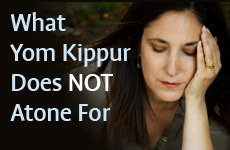 Pick up the phone and call that person you haven’t been speaking to.

Yom Kippur, with all its holiness and awesomeness, will atone for most of our sins, but not all. There are many sins that Yom Kippur won’t touch. Those are the sins that are between a person and his fellow man. Sins like gossip, slander, biting criticism, humiliation… you get the idea.

All of the effort you will put into your Yom Kippur repentance won’t erase the gossip.

All the tears and fasting won’t wipe out the hurtful words.

All the agonizing hours spent in shul pouring out your heart to God won’t alleviate the damage done to another’s feelings.

Atonement for these sins can only be gained by requesting forgiveness from those we have hurt.

Atonement for these sins can only be gained by requesting forgiveness from those we have hurt. The reason is simple yet fundamental. We must understand that part of our relationship with God is the relationship between ourselves and our fellow Jews. The two are inseparable. The Torah doesn’t allow for the railroading and trampling of individuals, notwithstanding any so called lofty goals.

Time to Get Over It

The following true story brings the lesson of Yom Kippur home in a most poignant way.

Shmulik was having a lousy morning. He just had a heated argument with his wife which he concluded by walking out and slamming the door of his home in one of small Israeli towns in the "West Bank." Rivka, his wife, was visibly hurt and pained.

Fifteen minutes later the phone rang. “Hi Rivka, its Shmulik. I’m heading into the tunnel and I just wanted to say that I love you and I’m so sorry for what happened before.”

Why the sudden change of face?

In years past there have been numerous sniper attacks in or around the tunnel Shmulik was referring to. People started calling it the “Tunnel of Love” because when you enter the dreaded tunnel, you realize what's really important in life. It suddenly dawns upon you that there really isn’t anything worth fighting over. Your fervent wish is to make it out alive and see your loved ones again, because after all is said and done nothing matters more than your relationships with the people in your life.

Yom Kippur is a tunnel of sorts. At this riveting moment we are begging and cajoling God for the gift of life and all its necessities. In return we promise to start making things right.

Well here’s one place you can start.

Pick up the phone and call that person that you haven’t been on speaking terms with. Ask forgiveness from those you have hurt and offended. Make up with your neighbor, ex-business associate or old classmate. Tell your mom, dad, brother, sister, spouse, kids or in-laws how much you love them and care about them. Because after all is said and done other things don’t matter much.

If you are reading this on Yom Kippur and don’t have the opportunity to call and ask forgiveness, then read Tefillas Zaakah prayer at the beginning of the Yom Kippur machzor.

Forgive with a full heart those who have mistreated you. Promise to call them after Yom Kippur to personally ask for forgiveness and have them in mind in your prayers.

May we all be blessed with the best year of our lives!

Dovid Frankel lives in Lakewood, NJ with his wife and children. His many accomplishments include getting the kids to bed on time.

Who Will Live, Who Will Die