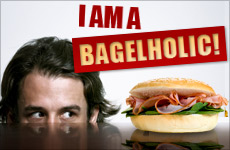 Have you ever loved something so much you had to let it go? I will miss you sweet bagel…

We all, to some degree, have our deep, dark secrets – things about us which we feel, if revealed, would shame us, get us in trouble with the law, cause our friends and family to reject us. And so it was with me. For decades, I’ve kept up the pretense of a normal existence, as though I didn’t have this shameful, dark part eating away at me that I dare not share with a soul. But I’ve come to learn that keeping all this in is too stressful, painful. It’s making me crazy.

And, so, in the interest of full disclosure, and so as to avoid future ulcers and time at the therapist’s – I’ve decided to come clean about it. Ladies and gentlemen, fellow Jews, anyone reading this on the Internet – I am a bagelholic. There. I’ve said it. It’s out. I feel relieved already. I beg you, simply, not to judge me too harshly. Perhaps if you understand how it started and the subsequent steps that led to my addiction, you’ll empathize and look upon me more kindly. After all, my bagelholism is just one small part of me.

I am more than just a bagelholic because my bagelholism is just a small part of me.

My first bagel? I remember it like it was yesterday, though I was just six months old and was teething like a demon. Nothing would give me satisfaction—not the milk, not Barney, not a pacifier. Just half a year old and I was already fed up with life and at the end of my rope. And then, one day, my mother handed me a Lenders frozen mini-bagel. Since I had no other activities penciled in for my afternoon schedule, I decided to give it a try.

I clasped the foreign object between my two tiny hands, opened my mouth and pushed it in. Ooh! Pleasure! Something cool to ease my teething pain. Something tasty. Something with a comforting round shape. It just felt right. It tasted right. I was hooked. Which, I suppose, made my mother an enabler. Just so you don’t think it was all my fault.

It wasn’t even just the food. I just liked the whole shape and look of the bagel, even in its non-food formats. As a young child, I collected everything bagel – bagel key chains, a bagel on wheels toy pulled by a string, a plush bagel and cream cheese meant for a dog, bagel mugs, bagel t-shirts, a bagel clock -- and something called Schmear! The Build-a-Bagel Card Game.

My entire book shelf was bagel-centric: Where On Earth Is My Bagel?, The Bagel: The Surprising History of a Modest Bread, The Bagel Bible for Bagel Lovers: The Complete Guide to Great Noshinig.

As I got older, I became exposed and addicted to the harder stuff – full-sized bagels, fresh bagels, bagels with all sorts of flavors and toppings. I even dabbled in the bagel offshoots – bialies, pletzels and bagel chips. When bagel stores serving bagel sandwiches opened, those were the only restaurants I was interested in visiting.

At bagel shops, I’d buy three dozen at a time, telling the salesperson that they were for a big brunch party. I started my own bagel blog, with bagel history, stories, cartoons, videos, contests, recommended stores and recipes. And I would never date anyone who wasn’t also nuts about bagels.

As time went on, I realized my behavior was somewhat more extreme than that of the typical bagel lover. My preference was always for restaurants that served breakfast all day so I could have a bagel. Staying over at friends’ houses, I’d invariably rummage through their refrigerators and freezers for my starchy “fix” when no one was looking. I found I could not pass a half-eaten bagel sitting in a street trash container without “rescuing” and eating it. I even had a map of the city in my den, with tiny flags indicating the locations of bagel stores throughout the city. The flags were color coded to indicate quality and how late they stayed open.

It got worse. I did my masters thesis on “The Bagel’s Effects on U.S. Policy and World History.” It was rejected, as was my proposal to teach an undergraduate course on the history of the bagel. I got a job working in a bagel shop, where I both made and sold the bagels, but even that wasn’t enough. I married a woman solely because her family owned a national chain of bagel stores so I knew I’d get free bagels no matter where we travelled. I insisted we name our children, Onion, Sesame and Pumpernickel.

In my spare time, I’d read everything I could about bagels – books, magazine and newspaper articles, websites. I’d track down documentaries and movies dealing with bagels and would even attempt to contact the experts who’d made them. Every bagel I ate was photographed and described in a scrapbook I kept.

Eventually, my wife, children, family, friends, neighbors and co-workers tired of my one-note interest and would have nothing to do with me. But I didn’t care. I couldn’t help it. I was on a mission to become the world’s foremost bagel expert and didn’t care what that would cost. Kicked out of my house, I holed up in a cheap motel. I no longer shaved, showered, exercised, or ate healthily—in fact I only ate bagels and cream cheese. The Bagel Demon had gotten hold of me and was determined not to let go. I gained weight. My clothing would no longer fit. I was disgusting.

Then, one morning, I woke up, alone, bloated, with bagel crumbs all over my bed and body. It was though I was observing myself from some audience and I was nauseated by what I saw. How did I get to this point? I remembered the poem, “Invictus,” that I’d read in school and years later learned that Nelson Mandela recited the poem to other prisoners and was empowered by its message of self mastery. It ends with this verse:

It matters not how strait the gate,
How charged with punishments the scroll,
I am the master of my fate:
I am the captain of my soul.

That did it. Something in me snapped and I spent the remainder of the day getting rid of everything I had that had anything to do with bagels, including my beloved bagel paperweight, swim trunks and bagel-designed bagels holder. Slowly, I began putting my life back together and making amends with all the people in my life who mattered so much more to me than some lump of dough.

Did I get that monkey off my back? Well, to a degree. You never get rid of it completely. After all, I didn’t throw out all my bagel stuff; just put it into storage. Once a bagelholic, always a bagelholic. So, it’s one day at a time. Besides, I’m way into pizza now.

The Ins and Outs of Jewish Fundraisers

Raising the Bar: Tips on Planning a Successful Bar/Bat Mitzvah

All Bar and No Mitzvah
Chukat 5782: Let’s Play the Blame Game!
The Sin of Moses: The Two Ways to Communicate
In Aftermath of Chicago’s July 4th Shooting, Local Moms Provide Countless Points of Light
Comments
MOST POPULAR IN Jewlarious
Our privacy policy