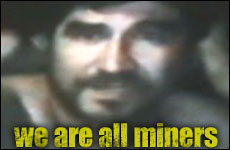 The Chile mine saga and a message for the High Holidays.

"Estamos bien en el refugio los 33." Seven simple words in Spanish scrawled on a piece of paper in red pencil, set hearts ablaze with hope last month. "The 33 of us are fine in the shelter," the words penned by one of the miners trapped deep underground in the Chilean desert, turned a tragedy of unimaginable proportions into a story of hope and tenacity, and have put the entire world on the edge of its seat as the effort to rescue them unfolds.

The story has all the makings of a blockbuster movie. (Undoubtedly, filming rights are already being eyed by the bigwigs in Hollywood, even as prayers are being said for the safe rescue of the men.) For many days the world held its breath. Thirty three men, unaccounted for after a massive collapse in a small, privately owned mine in Chile’s Atacama region. As days turned to weeks, hope began to fade fast, and rescue efforts began to wind down. Then, just when it seemed that the men had been swallowed up by the earth, a boring machine broke through into a cavern over two thousand feet below the surface. When the drill was retracted from the solid rock, that fateful note was found taped to its end.

As communication was established with the trapped men, details of their miraculous survival began to filter through. On the day of the collapse the men had worked overtime, delaying their return to the main shaft for their lunch break by a number of minutes. Had they exited the mine on time, they would have been in the main shaft as thousands of tons of rock came crashing down. Two days later, their attempts to escape the mine through a ventilation shaft were thwarted by a second collapse, and the men retreated to a designated emergency shelter to wait for help from the outside world.

Eighteen days later they were still clinging to life, having survived on two days worth of supplies, each losing between 17 and 20 pounds.

In a remarkable exercise of self-control, the men rationed their food down to a minimum, each consuming a few bites of tuna and tinned fruit each day, washed down with a few gulps of water. Eighteen days later, they were still clinging to life, having survived on two days worth of supplies, each reportedly having lost between 17 and 20 pounds.

But their ordeal has in many ways only just begun. As the world released its collective breath, elation quickly turned to worry, as drilling experts described the achingly long process necessary to bring the men to the surface. A giant boring machine has been brought to the site, and has begun to cut a rescue tunnel into the rock in a process that may take as long as four months.

In the meantime, specialists from around the world have gathered at the surface to nurse the men through their ordeal. NASA has sent a team of experts, who will draw on their experience maintaining astronauts in the hostile and isolating environment of outer space to assist in coaching and caring for the miners.

Until the men can be hoisted up through the rescue shaft, three narrow boreholes have been drilled into the rock, each no wider than a grapefruit. Referred to as their umbilical chord, these three holes will sustain the men for the duration of the long wait, with one having been designated for food, medicine and supplies, the second for oxygen and the third for communication cables to keep them connected to the outside world.

As the families of the miners gathered at the surface, the entire world has been gripped by the tale of these men. Suddenly we were all miners, imagining how we would cope in the nightmarish conditions, in the pitch black, hot and humid tunnels in the bowels of the earth.

Our Channel of Communication

There are no coincidences in our world, and the terrifying ordeal unfolding beneath the Chilean desert perhaps carries a message for us as we approach the High Holidays. In a certain sense, we are all miners. The High Holidays are a time when we stand before God to pray for the new year which lies ahead of us. On these days will be decided our fate, what type of year we will have and what we will receive from on high. Like the men trapped deep underground, we each find ourselves with a single channel of communication to a different realm, a narrow cable that is our source of hope and sustenance, the channel of prayer. And like the miners, our needs are being taken care of from above with love and devotion. Like the miners, we have nowhere else to turn.

Like the miners, our needs are being taken care of from above with love and devotion.

But the parallel runs deeper. When the medical experts on the surface began sending food to the men, they realized that after many days of deprivation, their digestive systems would not be able to cope with solid food, and they chose to initially only send fluids. No doubt the men were asking for more substantial nutrients, but the caring specialists up above knew what was ultimately good for them.

Many times we stand in prayer, asking God to send down what we perceive to be good for us. We need to have the wisdom to recognize that what we are given is really in our best interests, even if it's different than what we asked for.

This year, let us pray for the safe rescue of the 33 men trapped below the Chilean desert. And let us pray that we too will have a year of salvation and hope, sent down to us from Above, with love and care. Because in some small way, we are all miners.

Rabbi Aryeh Taback lives in Johannesburg, South Africa with his wife and children. He is the author of The Director: True stories of everyday miracles (Artscroll 2003), and freelances for various Jewish publications.