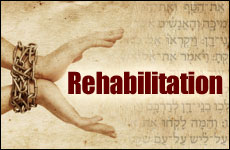 After taking another man's life, a petty criminal changes the direction of his life.

He looks like a typical religious Jew. But what very few know is that the first yeshiva he attended was in prison. We will call him Shalom which means peace. This is not his real name, but given his soft-spoken nature and the work that he does, this name is appropriate. This is his story; various biographical details are clouded to protect his identity, and his family – who other than his wife do not know the full story of how Shalom became the man he is today.

As a teenager, Shalom had dallied in petty crime, but as he approached adulthood he learned a trade and things were looking up. One evening, he took his girlfriend and his brother to a bar for a few drinks. At the other side of the bar his eyes met with those of a stranger; the other fellow, who probably also had consumed a fair share of alcohol, made a hand motion as if to say, "What are you looking at?" Shalom responded with his own hand motion, trying to communicate "nothing."

Shalom pulled out the knife he carried in his pocket, and when his assailant came at him, Shalom stabbed him in the neck.

But in seconds the stranger was is his face – encouraging Shalom to come outside and "discuss" the issue. Despite the pleas of his girlfriend and brother – who had seen this guy around town and knew that he was trouble – Shalom went outside. Before he knew it, he was attacked - "sucker punched." Reeling, Shalom pulled out the knife he carried in his pocket, and when his assailant came at him, Shalom stabbed him in the neck. Just then he heard sirens – the police had been alerted and were fast approaching. Shalom fled, with the police in pursuit, as the assailant lay in a quickly-forming pool of blood.

Shalom escaped. He remained a fugitive for the next month, alone and scared. He prayed to God that the man he had stabbed would live. A few days after the incident, he read in the newspaper that the man had died; Shalom was wanted for murder. Despite his attempts to remain free, he was soon apprehended. Yet of all the horrors that would befall him, nothing was as harrowing as the moment he learned that he had taken a life.

The murder charge was reduced to manslaughter; Shalom pleaded "self defense," but the court found him guilty and sent him to prison for 14 years. It seemed like a lifetime, an eternity.

In prison he began to question his values, his decisions, his life, and it was at that point that he met a rabbi who encouraged him to pray.

That rabbi was a member of a special yeshiva, the brainchild of Rabbi Yitzchak Dovid Grossman, Chief Rabbi of Migdal HaEmek and founder and president of Migdal Ohr Institutions. After the Six Day War Rabbi Grossman came to Migdal HaEmek hoping to do a few "good deeds." When he arrived there, he sought out the young people and found them in discos and bars. He soon learned that many had either been to prison themselves or had close relatives in prison. Rabbi Grossman was determined to do something for this lost segment of society, and received permission to make prison visits part of his normal weekly schedule. He found the prisoners thirsty for spiritual instruction. Convinced that this instruction could help their rehabilitation and fight recidivism, he petitioned the authorities to open a religious wing in the prison, where the prisoners could work on their spiritual growth, and hopefully, their rehabilitation.

Shalom began to study Jewish texts and found them fascinating, life altering; he began to find answers to his questions. He was now a yeshiva student, in a most unique yeshiva. The warden, though himself not a religious man, understood the power of belief, and made it known that anything these prisoners needed to pursue this new path would be considered, and if possible supplied. Shalom was soon joined by another prisoner, a “career prisoner” serving his third ten-year term for robbery who enjoyed a certain reputation amongst the prisoners.

The first bit of direction Shalom received from his prison rabbi was to say Psalms with conviction. The rabbi said, “Don’t be afraid to ask God for help – just go ahead and ask.” So late at night, Shalom lit candles (which were prohibited in prison), and read the holy book. The prison guards who saw what he was doing, recognized Shalom as a model prisoner and looked the other way. Night after night he would read, pray, and ask God for the impossible. He prayed for the arrival of the Messiah and an end to all the suffering in the world; he prayed for his fellow prisoners, and he prayed for the soul of the man he had killed – and he prayed to be released from prison. He began to learn Mishna – eventually completing all six volumes – in an attempt to elevate the soul of the man who had attacked him, the man he had killed.

His lawyer filed a petition. Shalom was brought before a judge who spoke with him and reviewed the file. In one stroke of the pen, nine years were taken off his sentence; 14 years were reduced to five. He was certain that the power of his prayers had produced this miracle.

Shalom was a changed man.

Shalom was soon summoned to a meeting, one that he had not anticipated. The room was full of police, social workers and rabbis. He was asked if he would like to join a special program – outside of the prison, where he could learn in a yeshiva full-time, a yeshiva created by Rabbi Grossman. The remaining years that he "owed" until he was eligible for parole would be spent doing what he now loved more than anything else: studying Torah – as a free man. Rabbi Grossman would be his warden and take responsibility that Shalom remained steadfast in his ways.

Shalom was a changed man. Over the next few years in yeshiva, he continued to grow, and continued to be the beneficiary of Rabbi Grossman’s visionary program. At the wedding of one of Shalom’s fellow yeshiva students, he was introduced to the maid of honor, whom he married shortly thereafter. Rabbi Grossman helped them financially to set up their home, and Shalom and his wife have built a lovely home and a beautiful family.

Many years have passed and today Shalom is an upstanding member of society. He spends much of his time and energy speaking to young people – teenagers and young adults, warning them about the pitfalls that lie in their path, about the dangers of getting into the wrong crowd, of acting without thinking. None of them know how he garnered so much wisdom, or where he gained his experiences.

One day not long ago Shalom received a phone call; Rabbi Grossman wanted to see him. A very important guest was coming to Migdal Ohr – a Justice on Israel’s Supreme Court. This same woman had been a member of the court that had sentenced Shalom to 14 years in prison. When they were introduced, the judge was shocked to learn Shalom's identity. They revisited the details of his case; Shalom explained that he had acted in self defense. The judge said that it had not been an easy case, but she was comfortable with her ruling. In fact, she admitted that upon learning that his sentence had been reduced she was quite cross with the judge who had presided over that hearing.

"The problem was that you never believed me or in me – or in the possibility that I could be rehabilitated."

Shalom spoke to the judge quietly, in even tones. And with the full weight of the years that had passed and the wisdom he had gained, he said, “The problem was that you never believed me or in me – or in the possibility that I could be rehabilitated. Rabbi Grossman did believe in me, and thanks to him I – and many others – were rehabilitated. I can only thank you for arranging my meeting Rabbi Grossman and his emissaries; I cannot imagine my life had that meeting never happened. Thank you.”

As we approach Yom Kippur, we need to know that each and every one of us can be rehabilitated. Most of us do not carry the baggage that Shalom does, but each of us faces unique challenges. We must never lose faith in ourselves and in our ability to change.

Postscript: Shalom today works in his privately owned business in the service industry.

Rabbi Yitzchak Dovid Grossman was awarded the Israel prize, the most prestigious prize given to citizens of Israel, for his lifetime of work with the underprivileged and impoverished; and the institution he founded – Migdal Ohr (http://www.migdalohrusa.org/).

The Princess: Sukkot
How Oswego, NY Became a Haven for America’s Jewish Refugees during World War II
Helping Jews after Hurricane Ian’s Devastation
Kosher Dillin': The Jewish history of Pickles
Judaism and Human Creativity
Jews and Beer: 8 Surprising Facts
After 500 Years, Closing the Circle
Patriotic Jews and the American Civil War
Why Are The Prayers Of Yom Kipur So Repetetive?
Ha'azinu 5783: A Time for Unity!
1 2 3 … 2,915 Next »