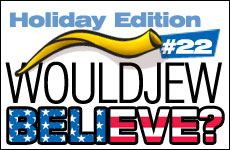 Outrageous, odd and interesting Jewish facts for the New Year.

According to Leo Rosten, not one person in a hundred — Jew or non-Jew — knows what the name “Rosh Hashana” truly means. Most view the holiday as the beginning of the New Year, however, rabbis in the Talmud and Midrash teach that Rosh Hashana is the anniversary of creation itself! Another Rosh Hashana Emmes (true point): Pickles, a great Jewish food favorite, are never served at Rosh Hashana dinners, so as not to start anew with a sour taste.

To play or not to play on the High Holidays has been the question – for Jewish celebs. Let’s look!

To play or not to play on the High Holidays?

These are the last lines of a poem written in honor of “Hammer’n Hank” Greenberg, when the baseball great who lead the Detroit Tigers to win their first American League pennant, refused to play on Yom Kippur in 1934. In 1938, with 58 home runs, he almost beat Babe Ruth's record of 60, but set a major league mark when he slammed two homers per game eleven times. In 1941, he was inducted into the Army, and was the first major leaguer to re-enlist following Pearl Harbor. After his discharge in June of 1945, during the pennant race, Hank hit a home run for the Tigers in his first game back, and blasted his famous grand slam home run in the last inning of the final game of the season. The man that Joe DiMaggio called "one of the truly great hitters" — Henry Benjamin Greenberg -- born in New York on September 16, 1911, was the first Jew elected to the Baseball Hall of Fame in 1956.

And while we’re on the subject ...

“The Jewish kid is probably the best of them.” — Casey Stengel, in answer to the question, “Who was the finest pitcher in baseball history?”

Although the L.A. Dodger southpaw pitching star played on the Sabbath when scheduled, he would not appear in the first game of the World Series against the Minnesota Twins, because it fell on Yom Kippur on October 6, 1965. Instead, he went to shul and fasted. His father, who thought baseball “a stupid game,” was nevertheless proud of his son’s famous decision, calling him “ ... a good Jewish boy.”(You can read more about Sandy Koufax here).

On the day following Yom Kippur in 1966, a young Ken Holtzman who was in his first full season in the majors, faced his hero, Sandy Koufax, who was in his last, in a pitching duel at Wrigley Field! Interestingly, the matchup occurred because Koufax refused to pitch on Yom Kippur and was rescheduled for the following day. Ken took a no-hitter into the seventh inning and allowed only two hits as he defeated Koufax, 2-1. Koufax retired after the season. Ken finished the season 11-16 with a more than respectable 3.79 ERA.

Born in 1896 to Orthodox parents, Benjamin Leiner, who boxed as Benny Leonard to keep his profession from his family, is considered by many to have been the greatest lightweight who ever lived. The International Boxing Hall of Famer, known for his intelligence, ultimately inspired the whole Jewish community. But at first mama was dubious. A street fighter from age 11, his mama asked: "A prizefighter you want to be? Is that a life for a respectable man? For a Jew?" Even when she knew of his boxing -- and fully supported him -- Leonard was sensitive to his mother's feelings, and refused to fight on a Jewish holiday.

Throughout my life, when I was moving further and further from Judaism, I always clung to a single thread — Yom Kippur. On that one day I fasted. I might be shooting it out with Burt Lancaster or John Wayne, or battling Laurence Olivier and his Romans (Spartacus) ... but I always fasted,” added Douglas, born Issur Danielovitch, in 1916. The son of Russian immigrants, re-affirmed his commitment to Judaism with a second Bar Mitzvah — on his 83rd birthday. (You can read more about Kirk Douglas here).

As we prepare for the New Year and Yom Kippur, it’s appropriate to look back and reflect on 5770, the year we leave behind – its joys, oys – gains and tragic losses. Here are but a few highlights:

*Elana Kagan, became the third Jew on the U.S. Supreme Court, bringing the percentage of Jewish justices to one third! (Though We Jews are only 2% of the U.S. population.)

*Helen Thomas, 89, while being videotaped by a rabbi, said “tell the Jews to get the hell out of Palestine.”

*A Jewish teenager trying to pray on a New York-to-Kentucky on US Airways Express Flight 3079 was using tefillin, leading the captain to divert the flight to Philadelphia, where the commuter plane was greeted by police, bomb-sniffing dogs and federal agents.

We said goodbye to those diverse, talented, Jews who made us, and the world, a much brighter, prouder place. They will be missed.

Donald Fisher: founder of The Gap

Miep Gies: hid Anne Frank and the others in her attic, made Anne’s diary public. 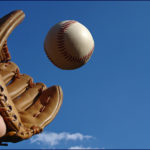 Put Me In Coach!7 min read