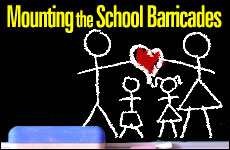 Advocating for our children.

I preface this with a proviso: The majority of teachers are caring, kind and dedicated to promoting the happiness and self-esteem of their students. They are usually underpaid, underappreciated, overworked, and continue in spite of that, because they love their profession.

Having said that, rare are the parents who have not, at sometime in the school lives of their children, felt torn between what they feel is their civic responsibility to be supportive of the teacher, and their gut instinct that it is their child who they should be supporting. If we can’t be perfectly balanced at all times, on the side of which should we err?

Everyone has his story to tell. I hope I can help a few parents by opening with one of ours, and the epiphany to which it led me.

One of my daughters, who I’ll call Sara, was only eight years old when we moved to a new city and she was in a new school, a little scared and insecure. I walked in one day and saw her gym teacher, who was directing an aerobics line dance in the hallway, grab Sara violently by the shoulders and fling her to the back of the line, shouting at her to move faster.

I will never forget the look of shame and devastation on my daughter’s face. I went up to the teacher, and said, with quiet fury, “Don’t ever lay a finger on my daughter again.” I looked up to see the principal standing in the doorway. He had seen the whole thing, and the shock was registered on his face. Sara was apparently not her only victim, and some time later, she was fired.

As another school year looms on the horizon, I think of an issue that, in our lives as parents, should play one of the most intense and critical roles in raising children. It is a role at least as important as being sure that they eat healthy lunches, do their homework, clean up their rooms and make it to jazz or soccer practice on time.

The word “advocate”, like the French “advocat”, means “attorney”. And that’s exactly what we must be – attorneys for our children. There is nothing we can do for the school lives of our children that is more important than mounting the barricades for them.

Why “barricades”? Because sometimes that is exactly what a school feels like – a fortress, with concentric ramparts protecting the inner sanctum, that are composed not only of physical walls, but also of personnel (secretaries, division heads), of outside forces (parents’ committees, school board) and, most lethal of all, of ingrained assumptions and philosophies that may or may not be relevant to this century, to our philosophy, or – worst of all – to our children’s personalities.

There can be problems in any city, any country, and any educational system. No one is immune and no parent should be complacent.

I write this also on the backdrop of my 30+ years experience in both formal and informal education. I recognize the frustrations that teachers face every day. Sometimes the pressure is crushing, and they get it from all sides. Teachers and principals are only people, and they make mistakes. But, like we learned in kindergarten, the best way to deal with a mistake is by, first, saying that you’re sorry.

Advocacy is not just about preventing wrongs; it’s also about getting your child the best education he deserves, and recognition of his strengths.

By the time my children were in the higher elementary grades, I had formulated my own erudite philosophy about schools, and it went like this: “As long as the school doesn’t destroy my child’s self esteem, or his natural curiosity to learn, it will be enough for us.” Now, after our youngest graduated high school, I still believe that.

A sampling of things you can do to advocate for your child:

And as for Sara? Today she is happily married with children of her own and with a degree in Special Education. One day, out of the blue, she said to me, “Mom, you were always ready to mount the barricades for us. Thank you.”

Being our children’s advocates, especially when we are young parents, demands courage, perseverance, and sometimes audacity, but it will pay off in their feelings toward us, and, even more important, in their perception of their own worth.

And it’s possible that an educator out there may learn something from you, in the process.

How to Improve Your Child’s Behavior

My Father, the Hassid
Lessons from the Book of Jonah
Where Are We? The Body, Brain, Soul Problem
Dr. Sheila Nazarian’s Escape from Iran
Comments
MOST POPULAR IN Family
Our privacy policy
Aish.com Is Looking for Great Writers