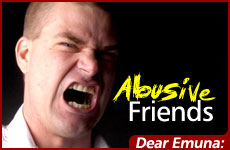 One of my closest friends gets extremely angry with me when we converse. I think he can't tolerate not feeling like the smartest person in the room. Ironically, he is very smart and I respect his intellect, but he can become rude and aggressive all of the sudden and this makes me not want to talk to him. How can I approach him to get him to cool off?

I confess to being a little confused by your question since I can’t really envision what you’re describing as a friendship. If, whenever you disagree, or even worse as your letter suggests, whenever you converse, your so-called friend gets extremely angry with you, I’m wondering about the foundation of this relationship. Being able to hold a civil conversation seems like a basic prerequisite. Conversely, respecting his intellect is not.

From your limited description, he seems to lack common decency which would seem another fundamental tenet of any successful friendship.

As far as getting him to cool off, our sages advise us not to try to appease anyone while they are angry. It just won’t work. The discussion must take place during a time of calm.

But then, if, as you suggest, all discussions lead to anger, we seem to be trapped in a Catch-22. The Torah repeatedly advises us to choose friends who share our values and help us to grow – and to aggressively avoid those who push us in negative direction. I think it’s time to pull back from this friendship and put more effort into relationships with people whose character traits you wish to emulate.

My husband has been on unemployment for two years and I'm disabled. My adult son and toddler granddaughter also live with us and he's also unemployed. Neither of them is looking for a job and both are huge eaters. I'm trying to stretch the dollar as far as it will go. My husband seems to think that purchasing meat in large quantities at warehouse stores is the way to go and we often disagree about what to buy and where to buy it. I would like him and my son to just concentrate on getting employed so our life can go back to normal and I could do the food shopping and save money. How can I encourage them to 1) concentrate on getting a job as a priority and 2) leave the food shopping to me?

I can hear the frustration on both sides. My guess is that the real reason your husband is taking such a strong stand on warehouse shopping has nothing at all to do with meat. For a man to lose his job is extremely humiliating – no matter how many times you point out that it’s a bad economy and it’s not personal. He feels like a failure, he feels impotent and powerless. He’s searching for something – anything! – to make him feel like he’s in control, like he has something to offer. Unfortunately for you, he seems to have alighted on grocery shopping. But begin by being compassionate and empathic to his situation.

I have another guess that the more you resist his suggestions, the more aggressive he becomes about them. Instead of fighting back and proving that the prices are indeed lower somewhere else, I recommend praise and gratitude. Thank him for his tips. Praise his thrift and ingenuity. The better he feels about himself, the more likely he is to put himself forward for positions of employment.

And the converse is also true. If he feels shut down and useless in every area, he won’t be motivated to seek a job and he will make a very poor impression if he succeeds in getting an interview. It’s your love and support that could make a real difference.

My niece has an eating disorder in which she tries to make herself as fat as she can. Based on her genetics and body type, she can never really get to the gigantic stage, but she has managed to get herself quite overweight to the point that her health could be at risk in the future. She has been doing this to herself for about five years already. She eats to get fat, not for health, sustenance, or enjoyment. Almost the only time she's happy is when she weighs herself and sees she gained some weight.

What can I do to convince her to stop? Does Judaism say anything about this? Her parents can't deal with this and they only make it worse (they're very vocal about her appearance and how important it should be to her and how it's almost the only thing important to them about her.) Several psychiatrists and psychologists have also done more harm than good, probably because they all focus on her body. She was always very sweet and spiritual as a child and full of life and energy and creativity and charm and she was always very interesting, individualistic, and an out-of-the-box thinker, and I think that when everyone looked at her like she was only her body, it started this problem, and when people now try to help her by focusing on her body, it makes it worse. I'm looking for something to speak to her soul. Thank you for your advice.

While I certainly agree that everyone needs to develop their spiritual side, your niece sounds like she needs competent (and I stress that word) medical and psychological help. This is a serious problem that requires serious intervention. I don’t know who she has seen until now but there are real experts in the field who know how to work successfully with kids with eating disorders.

She not only needs a spiritual solution – she needs to heal her body and her psyche. She needs a medical professional and not help from an advice column.

Dear Emuna: Into His Cave

My Husband Doesn’t Care about My Feelings

My Wife Is No Longer Religious
Were Adam and Eve Jewish?
How I Learned to Love the Multiverse
10 Big Jewish Inventions
Comments