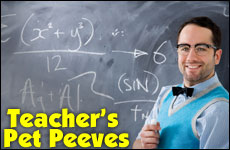 Yes I am the teacher, and yes these are the rules!

I don’t know why kids dread the first day of school. I know why the teachers dread it. Being a teacher means speaking in public every single day, and the only thing that normally gets us through public speaking is the knowledge that no one in the audience is judging us – they’re just grateful that it’s not them up there giving the speech. But students, on the other hand, will sit there and stare at you every single day with nothing to do but take mental notes of all your flaws and mannerisms so they could imitate you the moment you’re behind them in the hallway.

My absolute least favorite part of teaching is talking about the rules.

I’m a teacher (I attempt to teach Language Arts at my local high school), and my absolute least favorite part of teaching is spending the entire first day, class after class, talking about the rules. My first year of teaching, I pretty much just assumed that my students already knew the rules, since pretty much every teacher says exactly the same thing. I guess my plan was that whenever one of my students would do something I didn’t anticipate, such as jump out the window (this happens a lot, because most of my classrooms are on the first floor, and it’s the safest way for the kids to sneak around, seeing as the principal patrols the hallways), I would say, “Okay, new rule: You can’t jump out the window.”

The strange thing is that, almost every time I teach them just about anything in my lesson plan, someone in the class tells me that another teacher already taught them that. But when I get up there on the first day and tell them that they’re supposed to show up every day, to writing class, with a pen, every single student, in his head, goes, “What?!”

So thanks to this system, my list of rules gets longer and longer every year. It’s getting so long that I’m going to have to talk about the rules straight through until Rosh Hashana, and then the kids will come back after the holidays and jump out the window and go, “What? Oh, I forgot we couldn’t do that.”

“Really? So all the other teachers let you jump out the window? Or did you do that in shul on Rosh Hashana?”

So here are the rules – some of them anyway -- cobbled together from different parts of the last few years. By the time this list sees print, it’ll be outdated:

1. Stop calling me by the names of your other teachers. If I can learn forty names, you can learn four.

2. The best way to get your teacher to remember your name is to misbehave on the first day. Or to be someone’s brother.

3. Face front. I’m on this side of the room. I don’t know where your other teachers like to stand, but I like the side with the board.

4. Pick a seat and stay in it. If I assign seats, I’m going to put you between two people who are bestest friends in the whole wide world and behind the guy who could palm the ceiling without jumping.

5. Yes, the guy who had your desk last year was really into gum. But not so much into throwing it out. What was he building down there? A paperweight?

6. No, that doesn’t mean you can chew gum. But generally, I’m not going to grind everyone’s life to a halt so I can tell you to get up, walk across the room, and spit.

7. Okay, rule number seven: Yes, seven! Where were you? Please come to class on time. The breaks between periods are for getting your stuff together for the next period. Period.

8. Yes, we know the breaks are not that long. But every time we make them longer, everyone comes back smelling like basketball.

9. No, you don’t get extra points for pointing out typos in my handouts, any more than I get extra money for correcting you every time you misspell “your”. Also, if I forget to write “NAME”, you still have to write your name. That wasn’t me deciding to give you a break.

11. Just because I said the test is on Chapter 2 doesn’t mean you don’t have to remember what we did in Chapter 1. Everything in Chapter 2 is based on your knowing Chapter 1. If you’d read Chapter 2, you’d know that.

12. When the sages said, “Who is wise? He who learns from every person,” they were not talking about sneaking glances at other people’s test papers. And for goodness sakes, face forward!

13. If I ask you to find all the nouns in a sentence, and you write a word that is not, nor has ever been, in the sentence, I’m going to know that: A. You copied, and B. It was from someone with messy handwriting.

15. I’m not going to spend longer marking a paper than it took you to write it. If I say, “Circle the verbs,” and you put one huge circle around the entire paper, that will be your grade.

16. I refuse to believe that your mother had a baby on four separate occasions this year. Nor that your parents felt the need to take you to the hospital with them. If you’re going to spend all day playing hooky, at least set aside five minutes to think of a better excuse.

17. If I skip school as much as you want me to, the principal is going to hire a replacement. And then you’ll have to learn a whole new set of rules.

If Winnie the Pooh were Jewish