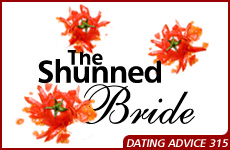 As she walks down the aisle, will the mother-in-law be throwing rotten tomatoes?

I am a 29-year-old woman who has finally found the right man. My fiancé, Gary, and I are planning to be married in six weeks. You'd think I'd be on cloud nine, but the truth is that I'm terrified. My future in-laws hate me, and some members of my fiancé's family have already stated their plans not to attend our wedding.

I'm not using the word "hate" lightly. I first met Gary's parents about a month before we got engaged, and that meeting was filled with tension. Gary noticed it, too, but he believed that once we all got to know each other, things would ease up. Exactly the opposite has happened. When we announced our engagement to Gary's parents, I felt as if we had told them that someone died. They didn't announce our engagement to their friends, didn't put it in the synagogue announcements, and didn't want to invite anyone except the immediate family to the engagement party my parents made for us.

What hurts even more is the fact that my future mother-in-law never refers to me by name. She uses derogatory terms when addressing me or talking about me, and she has criticized me to Gary in my presence. I know that she says plenty more when I'm not around! Gary says that his mother is having a hard time accepting me, and that it hurts him that this is happening, but he hopes that if we're patient, she'll come around. He's asked her to call me by my name and told her that if she can't say anything nice, to please not say anything at all. But she hasn't changed. Gary now just ignores her when she goes on one of her "venting sessions." Gary's father is pretty silent and cold to me, too.

I can’t figure out why Gary's family hates me so much.

I've tried to figure out why Gary's family hates me so much. We're pretty similar religiously, and we both come from middle-class backgrounds, so the issue isn't a difference in religion or class. I have a college degree, a job I like, and some money in the bank, so I'm not dragging Gary down with debt. I love Gary and I treat him with respect, so they can't say that I don't treat him properly. And I was pleasant to Gary's parents when we met and I don't treat them disrespectfully, even though I am hurt by how they feel toward me. Gary thinks it's a personality issue – I'm a high-energy, social, assertive person and maybe that's too much for them.

I invited my future mother-in-law for coffee one day, to try to make peace with her. I told her that I know things are awkward between us right now, and that I hoped in time we can have a good relationship. I asked her if there was something I could do to help it along, and she basically said that she doesn't want me to marry her son, that she thinks our marriage is destined to fail, and that she hopes Gary will come to his senses and realize this is a big mistake.

Gary's parents were not interested in helping plan the wedding, and only reluctantly gave Gary a list of relatives to invite from their side. Gary's married sister seems to be adopting the family position about me (I never met her, she lives 500 miles away) and has told him she won't be coming to the wedding. Just today, Gary's mom got so frustrated with our continued wedding plans that she said she plans to announce to all the guests that she is not pleased with his choice. Now I'm afraid that as the date grows nearer she may do something to sabotage the wedding.

I just want to have a nice wedding and start a life with the man I love. I'm not dreaming that Gary's family will accept me, but I don't want them ruining the wedding, either. And what do we do about our relationship with Gary's family after the wedding?

It's difficult for us to read a letter like yours, not only because we see how painful it is for you to be planning a wedding where Gary’s parents would like nothing better than to stop it from taking place. We're also concerned because experience has shown us that the disrespectful way they treat you will continue after the wedding, and we worry that this will have an effect on the marital harmony that you and Gary hope to achieve.

First, let's look at the positives about your situation. You're fortunate that Gary is astute enough to see that his parents are treating you badly, is disturbed by their behavior, and has stood up for you. However, you both may be underestimating the power their venom toward you can have. In addition, his hope that in time they will accept you may be unrealistic. It sometimes does happen, but frequently these hostile comments and behavior do not subside (they may even increase) and create real tension between the couple. That is our biggest concern.

You have to take steps to prevent them from poisoning your relationship.

We don't know how much more you personally can do to improve this situation. You are treating your in-laws with respect and even made overtures to try to mend fences. It may be that you and Gary have to wait it out to see if his parents come around after the wedding. At the same time, however, the two of you have to take steps to prevent his parents from poisoning your relationship. Here are a few suggestions that we hope you and Gary will discuss and try to implement:

Oftentimes, in-laws mellow once they see that a couple is doing well, or once grandchildren enter the picture. But in a situation where they continue to act antagonistically, the couple may decide to drastically minimize their contact with difficult family members.

We'd like you to be sensitive to the fact that Gary could be suffering from this as much as you are. His parents are putting him in a difficult position, and he may be torn about following our suggestions. If that is the case, we recommend that he speak with a rabbi who specializes in dealing with how Jewish law deals with difficult challenges to honoring one's parents. Not every congregational rabbi is well-enough versed in the legal and psychological issues to provide the best answer, but should be able to recommend someone highly qualified to speak with.

Before we close, we'd like to address your worry that Gary's family may try to disrupt your wedding. Sometimes, that can be a real concern. Other people in this situation have found that it is helpful to hire or designate someone to keep an eye on disgruntled family members and stop them in the event they attempt to sabotage the décor, food, music, or atmosphere of the ceremony and reception. It is painful to have to include this sort of arrangement in your wedding plans, but it may be necessary to give you and Gary peace of mind, to help you feel that your wedding day will be as smooth and special as you deserve it to be.

With our very best wishes for a wonderful life together!

Dating Advice #274 - Breaking Away
Should I Break Up, Get Engaged or Keep Dating?
Time Is Your Precious Commodity
A Constant World in Flux
Comments
MOST POPULAR IN Dating
Our privacy policy