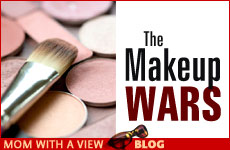 Adolescence is really about conformity, not rebellion.

I grew up in a very small town. If the girls in my eighth grade class wore makeup, they were sent home to wash it off. In high school, the only girls that wore makeup were the ones with a “reputation.” (I know, I sound quaint.)

I bought my first tube of mascara when I was 25 – and I still don’t really know how to use it. I’ve never worn foundation, rarely eye shadow. I’m not stating a moral position, just describing my experience.

Luckily I was able to speak to someone who runs a girls’ school in New York. She told me (and I paraphrase) to “take a chill pill.” She reassured me that it was not a big deal as long as it was applied in an understated fashion (We weren’t talking Goth here), that times had changed (yes, trite but true – groan) and that there were more important battles to fight.

I took a deep breath. I pasted a smile on my face. And I gave my daughter permission to wear makeup. She didn’t take advantage and she didn’t wear a lot. In fact once it was no longer about asserting her independence, she frequently forgot to put it on at all.

Adolescence is a mine field. We have to be careful where we step. But we don’t need to set up unnecessary barriers.

We have to tread carefully and not create unnecessary walls between our children and their friends.

Once we choose a school whose values we embrace then we have to allow our children to be in step with their peers – obviously within reason. At the same time that we were having this struggle with our daughter, a friend of ours (whose daughter was clearly at a different school) was struggling with her over whether she could sleep out in the woods with her boyfriend. Suddenly makeup didn’t seem like such a big deal!

We have to choose an environment that matches our values and then work within its parameters. While we have to teach our children to have the courage of their convictions, adolescence is not really about rebellion (except against parents). It’s all about conformity. It’s all about their peers. We have to tread carefully and not create unnecessary walls between our children and their friends. That’s why the initial choice of school and community is so important.

It’s a balancing act – with love and compassion dominating rigidity and judgment.

As we try to steer our children through adolescence, we need to focus on the world they live in, not the one of our childhood, and judge our battles accordingly.

And we need to concentrate on the things that never change – not the eyebrow waxing and the manicures – but our love for them, our relationship with God, the steadfastness of our Jewish values, and above all, the constant need for prayer.

The End of a Unique Passover