The Secret in My Marriage 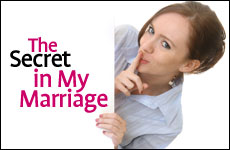 The unintended consequences of planning my husband's surprise birthday party.

When two people get married, their joy is doubled, while their sorrow is halved. So when my husband’s 39th birthday approached, I thought it would be fun for both of us to have a unique celebration. A surprise party would be perfect.

I started planning his party while my brother was visiting. I wished we could have invited my husband into our orbit to help us with ideas, but secrecy was the whole point. When my brother suggested the invitations read “Help him celebrate while he can still blow out the candles on his cake!” I started laughing – and quickly had to cover when my husband entered the room, telling him I was laughing about a story about my nieces. I felt a twinge of discomfort; I’d never lied to my husband before, and it felt weird to start.

“What did your brother’s girls do?” my husband asked, expectantly.

Desperately, I cast around for an anecdote. “They, um… pretended…. they were horses!” I improvised, gulping. My husband looked at me, waiting for the funny bit. I thought of a line by the British poet Sir Walter Scott: “Oh what a tangled web we weave / When first we practice to deceive!” as I dug myself deeper and deeper into trying to concoct a passably amusing anecdote.

After my brother went home, planning the party alone was much less fun. My husband loves Middle Eastern food, so I decided to have a Middle Eastern theme. My mom volunteered to make baklava for the party. But her recipe is dairy… should I go meat or vegetarian? That night, I turned to my husband and asked him his advice – but caught myself just in time. Instead, I just looked at him, at a loss what to talk about until my husband, oblivious of my thoughts, started doing something else.

Each time I felt like opening up to my husband, I had to quell the impulse.

That’s how it continued. Each step of the way, I felt like talking about how my plans were progressing, and each time I felt like opening up to my husband, I had to quell the impulse.

I even turned to subterfuge. My husband plays on a sports team, and I wanted to invite his teammates, but had no contact details for them. “Honey,” I asked nonchalantly one night, “what's the password on your e-mail account?” I tried to make it sound like I was interested in nothing more than his password decision-making methods. And, innocent that he is, he fell for it and told me his password. I was glad to invite his teammates, but the fun of party planning was wearing off. I was becoming like one of the spy characters in a John Le Carre novel: world weary and tired of secrets.

Most evenings, my husband would ask how my day had been. I’d be bursting with thoughts about his surprise party, but couldn’t say any of it. I started shrugging and saying “pretty good,” then changing the subject.

“Nothing happened today?” he’d venture, with a surprised look.

I began to feel boring and alone.

As the party neared, I got my biggest news yet: my husband’s parents, who live out of town, were going to come! When my mother-in-law told me, I was elated. Normally, it’s a very special family occasion when they come into town, but this time – nothing. No planning, no meals, no telling the kids, no excitement. It felt ridiculous to keep such a visit secret.

The party finally arrived. I have a photo of my husband at the party, and he looks incredibly happy. His eyes are shining and there’s a huge grin on his face. Next to him, I’m grinning as well. Only I know that the look of happiness on my face was mostly relief. No more secrets, no more lies. I felt like the character from, “The Spy who Came in From the Cold;” I've given up espionage and have returned, thankfully, to normal life.

My husband recently told me someone had suggested he make a surprise party for my next birthday. "Don’t do it," I told him. "Let's go out to dinner instead."

Remind Me Why We’re Still Together?

The Road to Divorce
In the Shadow of David and Goliath
Where Do the Laws of Nature Come From?
Saadiah Gaon, Rashi and Maimonides: How Three Rabbis Revolutionized Judaism
Comments