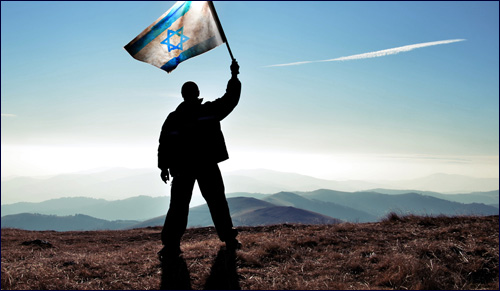 Don’t be silent. Advocate for Israel.

Under the banner of BDS, Israel is routinely being falsely accused of war crimes, genocide, ethnic cleansing, apartheid, killing children, poisoning wells, and harvesting body parts. Each month seems to turn up ever more gruesome, and baseless, accusations.

The lies are having an effect. Glasgow, in Scotland, for a time had a ban on acquiring Israeli books for its public libraries. Hundreds of artists and other cultural figures around the world have pledged never to perform in the Jewish state. In the Unites States, ten academic associations, representing thousands of professors and graduate students, have debated boycotting Israeli academics and researchers, with the promise of more bruising calls for boycotts to come.

It can feel overwhelming to stand up to such a movement of hate, but as the Jewish state is unfairly targeted and slandered, isolated and boycotted like no other nation on earth, we all have to do our part. Here are ten ways to stand up to BDS and defend Israel.

1. View yourself as an advocate for Israel

Every citizen of Israel spends time contributing to their country, defending and strengthening the Jewish state. We, Israel’s supporters abroad, can do the same. Start seeing yourself as an advocate for Israel; make it part of your identity today.

Become educated about Israel and current affairs. Read books about Jewish and Israeli history, subscribe to Israeli newspapers and magazines, check out Israeli news sites on the internet. Turn yourself in a person to whom others go for answers. Become the expert in the room who knows about Israel and can help counter the outrageous slanders of the BDS movement.

3. Strengthen your own identity, too.

Work on strengthening your own connection to the Jewish state and Jewish history. Enroll in classes at a local synagogue, take on the challenge of reading a Jewish book or learning Hebrew; consider taking on more Jewish traditions. One benefit is that by deepening your own Jewish identity, you’ll find it easier to identify with and feel connected to Israel, as well.

Start seeing everyone as potential friends of Israel. Co-workers, fellow students, your neighbor – everyone is a potential ally and spokesperson. Israel’s diversity and commitment to democracy and equality make it a beacon of liberal values that everyone can support. Talk about Israel, encourage people you know to connect in their own way to the Jewish state: help others to connect with and be inspired by the incredible dynamism of Israel.

Whenever you hear being Israel slandered or denigrated, speak up. When you read lies about Israel in the news, write to the editor demanding a retraction. Contact magazines, trade associations, cultural groups or schools whenever you see Israel being unfairly treated. When BDS activists visit your town, pick up the phone to let the organizers how you feel - then join counter-protests to make sure pro-Israel voices are heard too. If there’s no pro-Israel event or demonstration going on, organize one for your community.

Remember, you don’t have to do this alone. Monitoring organizations like Honestreporting.com, Standwithus.com and Amchainitiative.org can help by identifying instances of anti-Israel bias and providing resources to reach out and make your feelings known. And local Jewish institutions can help you in putting together pro-Israel programming near you.

6. Educate yourself politically and vote

In many communities, boycotting the Jewish state is illegal. Thirteen American states have passed some form of anti-BDS legislation, and President Obama has introduced a provision in a foreign trade bill that would potentially ban America’s trading partners from supporting BDS. Find out what the state of anti-BDS legislation is in your district, and work to support it.

It isn’t only specifically BDS-related legislation that’s important. The influential academic group American Studies Association, which voted for BDS at its annual meeting in 2013, is currently facing investigation for violating New York state law prohibiting discrimination. In 2009, France’s highest court ruled that towns calling for bans on Israeli products were breaking French law. In Australia, a pro-BDS academic who denied a fellowship to an Israeli is being sued for discrimination. Make sure you stay abreast of legislative issues, and be active.

7. Reach out to your elected representatives.

Do you know who your national and local political representatives are? Find out, today. Keep their phone numbers and email addresses handy and let them know that Israel is important to you. You don’t need to have a specific piece of legislation in mind when you call your representatives’ offices (though if one is pending, be sure to let them know your thoughts).

Calling up representatives, introducing yourself as a constituent, and letting their staff know that you value Israel lets your voice be heard and helps put anti-BDS measures on the agenda.

8. Reach out to anti-BDS activists in other states and countries.

To be isolated is to be defenseless. Make alliances with pro-Israel groups and individuals in other states and countries, and work together to help oppose BDS slurs, to support anti-BDS legislation, and to share resources.

Again, you don’t have to do this alone. National organizations like the American Israel Public Affairs Committee (AIPAC) and others can help you get in touch with pro-Israel communities and offer your help where it’s needed most.

Indifference is a huge problem in countering lies about Israel. One recent poll found that a majority of young Jews would not regard it as a “personal tragedy” if the State of Israel were destroyed. Countering this apathy is not easy, but it’s essential if we’re to counter the constant drumbeat of false and negative narratives about Israel that characterize the BDS movement.

Step out of your comfort zone and help organize opportunities for Jews to connect and learn more about Israel. Organize an Israeli movie night in your living room. Ask your kids’ school to host events related to the Jewish state. Dare a friend (and yourself) to take a Hebrew class together. Whatever your interests, brainstorm ways to connect with Israel’s dynamism and to help others in your community learn more about Israel too.

When Israel is constantly being talked about in terms of politics, it’s easy to get turned off. Conversation and social media posts about Israeli arts, its thriving literary scene, sports, and food are much more likely to get people’s attention, and to help them get a sense of the Jewish state.

Blog about your family vacation to Israel. Post items about Israeli culture or food on social media. Review the latest Israeli music album for a local newspaper. Instead of always talking politics, talk about culture and sports instead. We each have our way to connect with Israel; make sure you let people know about yours.

Terminal Judaism
Vayelech 5783: Regret and Repent
Rabbi Sacks: Focus On the Important, Not the Urgent
Put Your Foot Down: Are Human Feet Poorly Designed?
Comments
MOST POPULAR IN Israel
Our privacy policy
Aish.com Is Looking for Great Writers