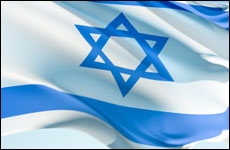 On April 16, that tiny country Israel, burdened with decades of unremitting attacks on its very legitimacy and existence, celebrates her 65th year of independence. There are good reasons why Americans should celebrate that.

We could talk about the historical bond between the two nations. A bond that is underpinned by a shared commitment to freedom, liberty, democracy and the rule of law.

We could celebrate how both Israel and the United States have become thriving multicultural states, successfully absorbing and integrating millions of refugees and immigrants from around the world.

Or perhaps that Israel remains the United States' most important ally in the Middle East, with both countries leading the global fight against terror.

And at a time of upheaval, violence and instability engulfing the Middle East, it wouldn't hurt to reflect that Israel remains the sole oasis of stability, in a region where people are dying and fighting for their basic human rights.

But there are other, no less equally important reasons.

For example, the Northern Galilee Plasan factory is producing advanced armor technology, that helps protect and save the lives of thousands of American soldiers serving in Iraq and Afghanistan. While for the first time ever, the U.S. government has just approved the installation of advanced Israeli-produced radio and data transfer systems onboard advanced U.S. fighter aircraft. This will provide the aircraft with greater immunity to deliberate jamming of its communication systems.

Israel based Better Place is a world leader in developing transportation infrastructure technology to support electric vehicles to reduce carbon emissions and the cost of driving, while at the same time helping reduce our dependence on oil.

Israel is also the home for medical research technology that is revolutionizing the industry and saving many lives worldwide. Vaxil BioTherapeutics, an Israeli bio-medical company for example, has produced a ground-breaking therapeutic vaccine for cancer patients which could prevent about 90% of cancers from returning, while also 'training' the immune system to seek and destroy malignant cells that have already invaded the body.

Israel is also a world leader in high-tech. Just ask Google, which is pouring money into Israeli start-ups, Apple who will soon open its first R&D center outside its California headquarters in Haifa Israel, or Microsoft, which is setting up a new research center and innovation incubator in Tel Aviv. It is no wonder that the likes of the Wall Street Journal have recognized Israel as the "Start-Up Nation," while Bill Gates has called it a "hi-tech superpower".

Those looking to invest outside the United States, which is currently experiencing financial woes at home, should also look no further than Israel. According to the IMF, Israel's economy grew by 4.7% in 2011 (as opposed to 2.5% in the U.S.), more than double the average for members of the OECD group of developed countries, with unemployment at a record low of 5.4%. While according to the latest Bloomberg Riskless Return Ranking, Israel has "produced better risk- adjusted returns than all other developed stock markets in the past decade."

Israeli academic institutions are also renowned for their ground-breaking research and. This was one of the reasons why Cornell University, which partnered with Israel's Technion Institute, last year won a major New York City contest to build an applied science and technology campus on Roosevelt Island. NYC Mayor Bloomberg said "in a word, this project will be transformative," adding it may generate $23 billion in economic activity over the next three decades.

Israel is also the only country in the Middle East where the number of Arab and Palestinian Christians is not only increasing, but actually thriving, with freedom of worship and their holy sites completely protected and secure (as they are for all faiths). In contrast, ancient Christian communities are fleeing from Arab and Muslim countries in record numbers, where they continue to be persecuted and their remaining holy sites desecrated.

An Israeli humanitarian organization, Save A Child's Heart, which is partly funded by the government, provides life saving heart treatment - free of charge - to children from around the world. What isn't commonly known is that fifty per cent of the children treated are from the Palestinian territories, while the remainder are from various poor and/or developing nations - many of which do not even have diplomatic relations with Israel.

And Israel has managed to achieve all the above while having to spend more per capita than any other country on defense against implacable enemies whose primary goal is to see her destruction.

Is Israel perfect? No, of course not. It also makes mistakes and has problems. But at a time when many seek to unjustly delegitimize and demonize the Jewish State, it is well worth celebrating her many significant, indeed extraordinary contributions to society, and how such contributions enhance the everyday life and national security of the United States.

Israel: The World's Most Moral Army
Bechukotai 5782: Divine Retribution
Behar 5782: Working to Live or Living to Work?
The Wholeness of Being Broken
Comments
MOST POPULAR IN Middle East
Our privacy policy